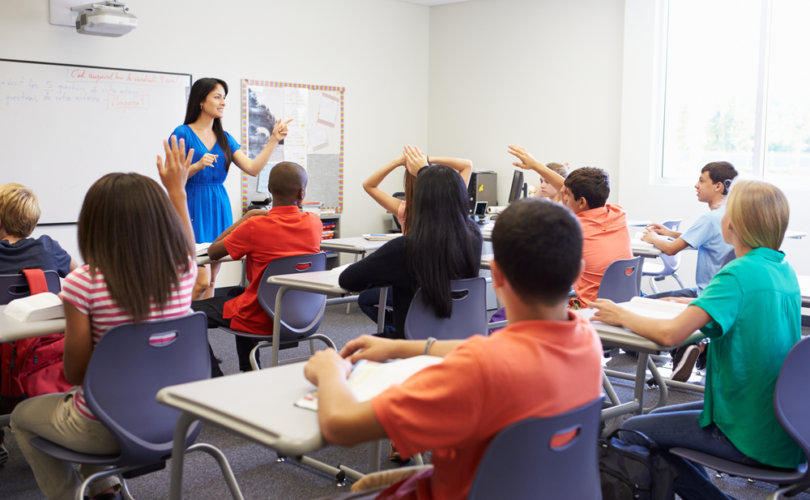 “Our concerns are centered around the belief that our students must be taught the most current curriculum,” Jennifer Yust, president of the Catholic Principals Council of Ontario, said in an August 3 press release.

That includes “thousands of parents, educators, child-care professionals, the Institute for Catholic Education, and other organizations/affiliations who helped shape the curriculum that has been in place since 2015,” CPCO stated.

But Lou Iacobelli, a retired Catholic teacher and chair of the Parental Rights in Education Defense Fund (PRIEDF), blasted CPCO for “playing politics.”

“Yust is not doing her job, which is to defend Catholic education and help protect the souls of the children who attend those schools,” he told LifeSiteNews.

“She should respect the fact that the new government of Ontario has repealed the curriculum and instruct her membership to follow the change in policy.”

Moreover, CPCO’s contention students must be taught “the most current curriculum” could “mean so many things,” Iacobelli noted.

It could mean “allowing Benjamin Levin, the convicted child predator who helped to develop the curriculum, to be invited as a school guest speaker,” he told LifeSiteNews.

Or it could “refer to the teaching of fluid gender identity. The ideology is not Catholic,” added Iacobelli.

As for “other organizations/affiliations who helped shape the curriculum,” Jack Fonseca of Campaign Life Coalition has pointed out the Liberals consulted abortion advocate Planned Parenthood Toronto, Ontario Physical and Health Education Association (OPHEA), and Queer Ontario.

“OPHEA publishes radical sex-ed resources like ‘The Guide to Getting it On” book. Queer Ontario advocates for the normalization of sexual bondage and group sex,” he said.

Critics of the 2015 sex-ed curriculum, which the Liberals rolled out despite unprecedented parental backlash, note that it’s virtually identical to the 2010 version that Liberal Premier Dalton McGuinty did nix because of public outcry.

The 2010 version was part of a curriculum overhaul called for under the Equity and Inclusivity Strategy, which then-Minister of Education Wynne implemented in 2009 under the direction of deputy minister of education Ben Levin.

Levin was sentenced in 2015 to three years in prison for three child pornography-related convictions, including counseling another to commit sexual assault, in this case, of a minor.

When the Liberals released the sex-ed in February 2015, Cardinal Thomas Collins of Toronto said ICE would produce resources to ensure Catholic schools taught it through a Catholic lens.

The Liberals had already consulted ICE, “most especially, with respect to necessary resources to support the implementation process,” ICE executive director Michael Pautler told LifeSiteNews at that time.

ICE subsequently received $250,000 from the Wynne government to develop these materials, a 2016 freedom of information request revealed.

The newly developed Catholic resources begin, almost innocuously, in Grade 1 by teaching kids in a mixed classroom about sexual difference and giving them keywords like “gender” and “diversity.” But, by the time the kids hit Grade 8, practically every major outcome of the 1960s sexual revolt has been inculcated into them, including often-neutral portrayals of contraception, homosexuality, transgenderism, and gender theory.

The Liberals also consulted the Ontario Association of Parents in Catholic Education (OAPCE) on its sex-ed program, and OAPCE president Brian Evoy said his organization was “very much in favour of the curriculum and all of the changes that will be made.”

OAPCE has two representatives on ICE’s board, as does CPCO, as does the notoriously dissident Catholic teachers’ union, OECTA, whose former president, James Ryan, recently opined “most teachers will simply ignore” Ford’s repeal of the Wynne sex-ed.

Roger Lawler, the Assembly of Catholic Bishops of Ontario’s general secretary, is also listed as a director of ICE. Lawler, a partisan Liberal, tweeted his support of the Liberal sex-ed in 2016.

Meanwhile, when it comes to adapting a ministry sex-ed to a Catholic lens, the “elephant in the room” is Fully Alive, the sex-ed curriculum the Ontario bishops developed in the 1990s.

Fully Alive has been criticized — notably by a bishop and a canon lawyer — for sexualizing children from a young age, ignoring the Church’s teaching on grace, sin, and modesty, and presenting an overall anthropology at odds with the Church’s vision of the human person.

The late Msgr. Vincent Foy, a Toronto canonist, strongly criticized Fully Alive for “victimiz(ing) children” by its “inherent de-sacralization of sex,” by “desensitizing them in the sacred and private area of sexuality,” and by “leaving them prone to sexual experimentation.”

And the late Bishop Roman Danylak of Toronto criticized the Fully Alive sex-ed program in 1998 as “gravely flawed” because it “deviates from the Church's teaching on family life education.”