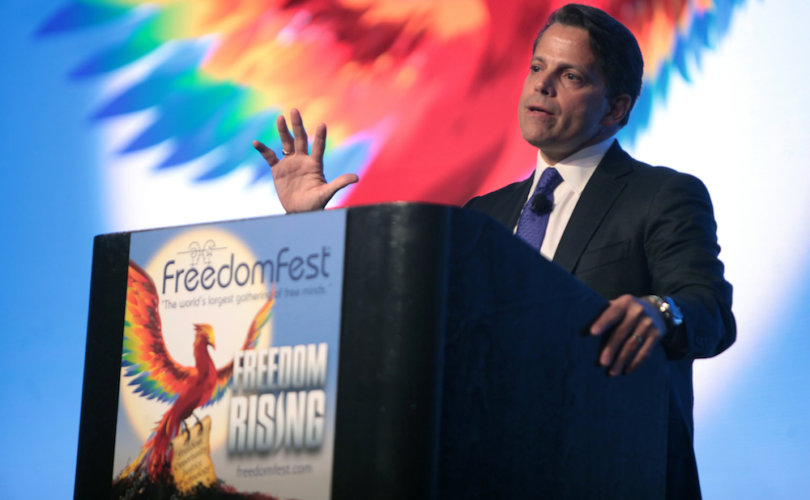 January 13, 2017 (LifeSiteNews) — Anthony Scaramucci, who describes himself as a committed “gay rights activist,” has been picked for a top job advising President-elect Trump that is comparable to Valerie Jarrett’s preeminent role in the Obama White House, The Washington Post reported Friday.

“We don’t want to be on the wrong side of history,” Scaramucci told the Huffington Post last April, explaining why his investment company, Skybridge Capital, gives to LGBT groups. Scaramucci, a 2012 Mitt Romney mega-donor, last year invited “transgender” activist Bruce (“Caitlyn) Jenner to speak at  his annual SALT conference, which he describes as a “premier thought leadership and global investment forum” for fellow hedge-fund investors.

HRC bought the web domain “Dump Trump,” said he is “unfit for the presidency” and that he “spews hate toward LGBTQ people.” Meanwhile, The New York Times reports that Trump is the most pro-homosexual major Republican candidate in U.S. history.

Anthony Scaramucci, a prominent New York financier and confidant to President-elect Donald Trump, has accepted a top position on the incoming White House staff, where he will coordinate the administration’s engagement with the U.S. business and political community, according to two transition officials familiar with the decision.

Scaramucci’s position, which is expected to be formally announced this week, is described inside the Trump team as akin to the job held by one of President Obama’s most powerful advisers, Valerie Jarrett, who directs the Office of Public Engagement and Intergovernmental Affairs, according to the transition officials, who spoke on the condition of anonymity because they were not authorized to speak publicly.

The officials said Scaramucci will take over Jarrett’s position but that the name of the office could be changed to what it was in the George W. Bush administration, the Office of Public Liaison and Intergovernmental Affairs.

By many accounts, Jarrett is one of the most influential presidential advisers in U.S. history, attending almost every meeting with Obama, even with foreign delegations. The liberal New Republic reported in 2014 in an article on Jarrett titled “The Obama Whisperer,” that “Obama has said he consults Jarrett on every major decision, something current and former aides corroborate.”

A Trump transition team executive committee member, the New Yorker Scaramucci is known for his colorful media commentary as a frequent guest on TV financial talk shows. But he can be loose with the facts: In his recent BBC interview, he got two things wrong: that homosexual pop artist Elton John would be performing at Trump’s inaugural (John said he is not performing), and Trump “will be the first American president in U.S. history that enters the White House with a pro-gay rights stance.”

On the contrary, both Bill Clinton and Barack Obama ran as strongly “gay rights” candidates and then governed as pro-homosexual presidents. And Trump does not favor legalizing homosexual “marriage,” a position to which the outgoing President Obama infamously and allegedly “evolved,” and as did both Bill and Hillary Clinton. (Obama’s top aide, David Axelrod, later wrote that Obama was “[bull-sh—-ing]” American voters in 2007 when he ran claiming to support traditional marriage.)

Moreover, as a Republican candidate, Trump promised conservative evangelical voters that he would appoint judges who would be in favor of reversing the “shocking” 2015 Obergefell ruling through which the Supreme Court effectively imposed “gay marriage” on all 50 states.

After being elected, however, Trump told 60 Minutes that national same-sex “marriage” is “settled law.”

Pro-family conservatives and people of faith, especially evangelicals whom Trump actively courted, are wondering which Trump they will get on January 20. Will it be the Trump who has surrounded himself with socially conservative advisers such as Vice President-elect Mike Pence and Dr. Ben Carson, or the Trump who in the past (and present) has sympathized with the LGBT movement, like fellow New Yorker and confidant Scaramucci.