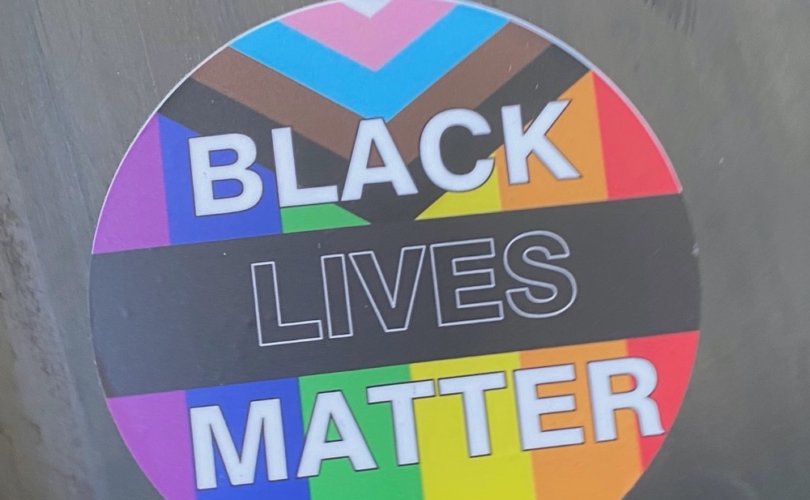 A BLM sticker at Union Station in Washington, D.C., combining the pro-LGBT rainbow flag and the transgenderism flagLifeSiteNews

June 12, 2020 (LifeSiteNews) – With anti-police sentiment at a fever pitch across the United States, the violence that has broken out in Black Lives Matter (BLM) protests has led to the injury of more than 700 law enforcement officers so far, according to Justice Department figures.

For weeks, American cities have been the scenes of both mass protests and large-scale riots in response to the killing of black Minnesota man George Floyd at the hands of white Minneapolis Police Department (MPD) Officer Derek Chauvin, who has been fired from the force and charged with murder. The event reignited the BLM movement and its thesis that Floyd’s killing and similar incidents over the past several years are signs of a “systemic racism” that permeates American institutions.

Since the riots and protests began at the end of last month, an estimated 700 federal, state, and local law enforcement officers have been injured by “demonstrators,” the New York Post reported. Just in the nation’s capital, another 60 Secret Service agents and 40 members of the U.S. Park Police were also injured, 22 of whom required hospitalization.

Further, at least one law enforcement officer, retired St. Louis Police Captain David Dorn, was shot and killed by the rioters. Dorn, who is also black, had responded to an alarm at a St. Louis pawnshop that was being looted.

The news comes as rhetoric against police brutality has quickly morphed into general sentiment against law enforcement as a whole. The Minneapolis City Council has announced its intentions to “disband” the MPD, offering in its place vague proposals to have social services agencies handle several of law enforcement’s traditional responsibilities. The long-running television series “Cops” and “Live PD,” which had camera crews follow real police officers on ridealongs, have been canceled, and even LEGO temporarily paused advertising on its police-themed construction toys (along with a buildable model of the White House).

Former Vice President and current Democrat presidential nominee Joe Biden declared Tuesday that there is “absolutely” systemic racism in law enforcement. During his remarks, he offered the qualifier that “not all law enforcement officers are racist,” and that “there are some really good, good cops out there,” implying the non-racist cops are the exception to the rule.

Nor are such sentiments confined to the traditional political Left and its allies. On Thursday, National Review, founded by late conservative icon William F. Buckley Jr., published an essay declaring that the “answer could only be yes” to the “question of whether police treat black people differently,” and even arguing that the national attention devoted to the protests’ violence comes from an “obsession with modes of racial protests rather than with the meaning of them belies an unwillingness to face the flaws they expose in the nation's ability to live up to its ideals and fulfill its obligations to the citizenry.”

In fact, while the Floyd killing and similar events across the country indicate problems at MPD and other departments that need to be addressed, evidence does not support the thesis that American law enforcement, as a whole, disproportionately uses lethal force against blacks.

Last August, researchers from the Universities of Michigan and Maryland examined 917 officer-involved fatal shootings and “did not find evidence for anti-Black or anti-Hispanic disparity in police use of force across all shootings”; in fact, they found that “officers are less likely to fatally shoot black civilians for fear of public and legal reprisals.”

Despite its current mainstream popularity, Black Lives Matter is anything but mainstream. Aside from its views on racism and law enforcement, BLM’s “What We Believe” Page declares that it seeks to “disrupt the Western-prescribed nuclear family structure requirement” and “dismantle cisgender privilege.”

In other official statements, it has “demand(ed) reproductive justice that gives us autonomy over our bodies.” An estimated 40 percent of all U.S. abortions are sought by black women, meaning that Black Lives Matter supports the annual elimination of more than 344,800 black lives every year.