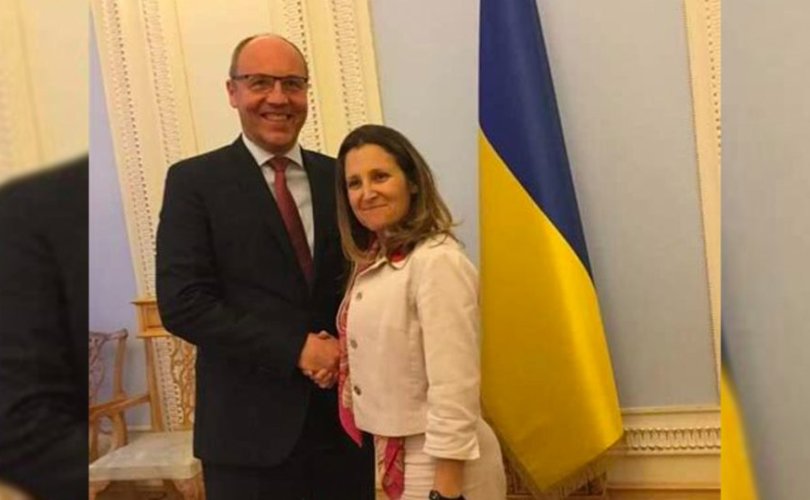 OTTAWA (LifeSiteNews) – Canadian Prime Minister Justin Trudeau and Deputy Prime Minister Chrystia Freeland had meetings from 2016 to 2019 with the co-founder of a Neo-Nazi-styled fascist party in Ukraine.

The meetings were revealed in a report published Tuesday by True North News, which claimed that both Trudeau and Freeland met with Andriy Parubiy, who served as a type of legislative speaker in the Ukrainian Parliament from 2016 to 2019.

Parubiy helped build Ukraine’s far-right neo-Nazi movement, and in 1991 co-founded the Social-National Party of Ukraine (SNPU), which was a Nazi-styled party focused on “racial nationalism.”

The SNPU was renamed the Svoboda Party in 2004, with one of the goals being to remove ultra-extreme elements from the party along with Nazi-themed imagery. However, today it is still considered an “ultranationalist” party with some fringe elements attached to it.

According to True North, Trudeau first met with Parubiy in 2016 in Ottawa, as part of a meeting that was detailed by the Ukrainian Embassy to Canada. Also at the meeting was then-Minister of Defence Harjit Sajjan.

In July 2016, Trudeau again met with Parubiy on a visit to Kiev, Ukraine. Freeland was in attendance as well, although at the time she was Minister of International Trade.

In May 2019, Freeland met with Parubiy again, posting about it on her Facebook page. At the time, she was Minister of Foreign Affairs.

“Met with Andriy Parubiy, the Speaker of the Verkhovna Rada, and discussed the role that Canadian election monitors played in Ukraine’s presidential elections and will play again parliamentary elections later this year,” Freeland said.

“Canada stands with Ukraine and its vibrant democracy!” she added.

A report from the Jerusalem Post says that as late as 2016, Parubiy was making anti-Semetic remarks.

Of note is that Conservative Party of Canada (CPC) MP James Bezan and former interim leader of the party Rona Ambrose met with Parubiy in 2016.

According to True North, there are photos of Parubiy “marching in a Nazi-styled uniform as a young man, and one such photo was even featured on the front cover of a book alleged to be about white nationalism in Eastern Europe.”

At the end of February, Freeland was photographed holding a banner of a Ukrainian nationalist army with links to the Nazis who massacred tens of thousands of Poles as part of an ethnic cleansing program.