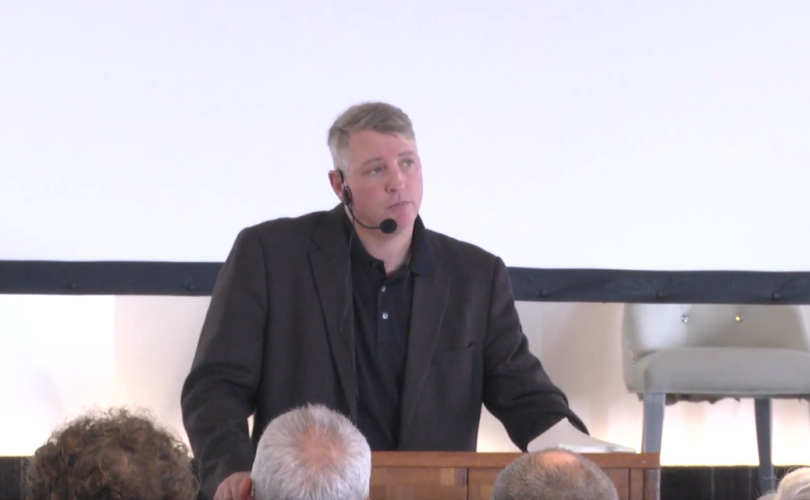 UPDATE, September 29, 2022: LifeSiteNews has deleted a reference to a class-action lawsuit regarding an anti-psychotic medication, as the reporter who broke the story has since acknowledged misidentifying the individual involved as the B.L. of this case. LifeSiteNews apologizes for the error.

ORIGINAL REPORT, September 27, 2022: (LifeSiteNews) – The man who triggered a raid by federal agents on the home of pro-life activist Mark Houck allegedly has a history of drugs and disorderly conduct that could shed light on the incident the Biden administration is using to punish the Catholic father of seven, according to new revelations from independent writer and documentarian Jack Cashill.

Houck is the founder and president of The King’s Men, which promotes healing for victims of pornography addiction and promotes Christian virtues among men in the United States and Europe. He also also drives two hours south to Philadelphia every Wednesday to sidewalk counsel for six to eight hours at two different abortion centers.

— Article continues below Petition —
Stand with pro-life Catholic dad of 7 raided by Joe Biden's FBI
Show Petition Text
6765 have signed the petition.
Let's get to 7500!
Thank you for signing this petition!
Add your signature:
Show Petition Text

According to Houck’s family, outside one of the centers last year, Houck pushed a 70-year-old pro-abortion individual who repeatedly verbally harassed his then-12-year-old son. The family says Houck shoved the man away to protect the child from the man, who had also intruded on his personal space, and while the man fell down but was uninjured.

The altercation, a local matter that had long since been tossed out of court, somehow drew the interest of the U.S. Justice Department (DOJ) under President Joe Biden and Attorney General Merrick Garland, which on Friday morning sent a team of 25 to 30 FBI agents and around 15 vehicles to swarm their property.

Weapons drawn, “they started pounding on the door and yelling for us to open it,” according to Mark’s wife Ryan-Marie. Frightening their children, the agents arrested Houck and took him away, charging him with violating the federal Freedom of Access to Clinic Entrances (FACE) Act, due to a claimed “ATTACK OF A PATIENT ESCORT.”

Writing at American Thinker, Cashill reports several details from court documents about the aggressor in the original incident, identified only as B.L., which the mainstream media and the Biden-Garland DOJ have so far overlooked.

First, B.L.’s original complaint against Houck was dismissed at the time because B.L. neglected to show up for the original hearing, while Houck did. Second, B.L. was arrested in the 1970s for charges of possession and manufacturing of controlled substances, as well as for “disorderly conduct persistent,” which typically denotes a suspect defying police warnings to cease his behavior.

“So, we’re dealing with accusations from a 71-year-old who was previously arrested on multiple drug charges, pled guilty to one, [and] pled guilty to disorderly conduct,” summarizes an attorney who helped Cashill analyze the documents. “Something that the media probably won’t normally discuss.”

If true, the background puts into perspective the likely threatening nature of B.L. behavior toward Houck’s son, as well as the probable futility of getting him to back down through words alone.

The story of Houck’s plight has gone viral since LifeSiteNews broke it, eliciting outrage over the Biden administration’s persecution of a committed pro-lifer and lack of comparable action against a recent wave of pro-abortion violence. Sen. Josh Hawley (R-MO) demanded answers Monday from Garland as to his “repeatedly weaponizing the FBI” against the administration’s “political opponents.”