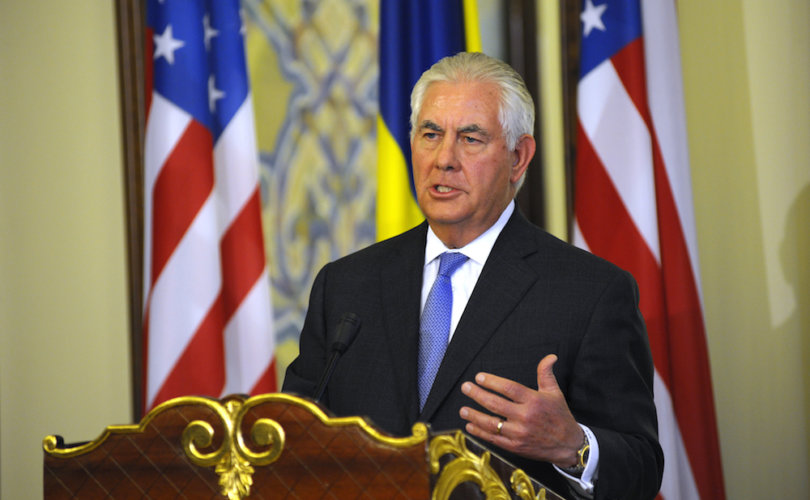 WASHINGTON, D.C., November 30, 2017 (LifeSiteNews) – The Trump administration is planning to “force out” pro-abortion, pro-LGBT Secretary of State Rex Tillerson in the coming weeks, The New York Times reported this morning.

Tillerson, a former oil executive, is much more socially liberal than many others in the Trump administration. Under his leadership, the State Department has continued to push for “LGBT rights” abroad. Last week, Tillerson issued a statement for “Transgender Day of Remembrance” promising that the U.S. “remains committed to advancing the human rights and fundamental freedoms of all persons.”

Tillerson has also publicly made comments that seemed to be critical of Trump.

The New York Times report said Trump “has been said to have soured on Mr. Tillerson and in general is ready to make a change at the State Department.”

As CIA director, though, Cotton would be focused on intelligence and national security rather than life and family issues.

According to The New York Times:

Mr. Trump and Mr. Tillerson have been at odds over a host of major issues, including the Iran nuclear deal, the confrontation with North Korea and a clash between Arab allies. The secretary was reported to have privately called Mr. Trump a “moron” and the president publicly criticized Mr. Tillerson for “wasting his time” with a diplomatic outreach to North Korea.

Pompeo is a former Republican congressman from Kansas.

Pompeo is against abortion and has voted to defund Planned Parenthood, which he noted is the “largest commercial provider of abortions in the United States.”

Pompeo has sponsored a host of pro-marriage and pro-freedom bills, including one that would have protected the tax-exempt status of nonprofits that don’t support redefining marriage.

Under the Obama administration, the State Department created the Special Envoy for the Human Rights of LGBT Persons, which promotes homosexuality around the world, even in religious and socially conservative countries. So far, it has been continued under Tillerson.