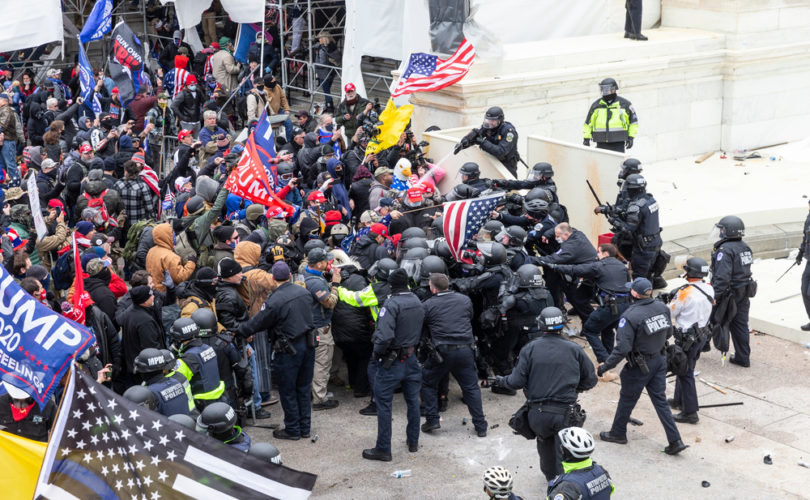 January 6 riot at the U.S. CapitolShutterstock

(LifeSiteNews) — The Washington Post’s in-depth November investigation into the events of January 6, 2021, called into question the ability of law enforcement –– most notably the FBI –– to effectively detect and neutralize a major crisis after documenting hundreds of glaring calls for violence the FBI received in advance yet ultimately ignored.

Why didn’t the FBI act on all this intelligence? Is it incompetence or is there a more sinister explanation? First, let’s look at what the FBI knew.

As The Washington Post reported, by December 22, 2020, the FBI was aware of hundreds potential threats emanating from one pro-Trump website, theDonald.win. One tipster called the FBI on December 20, 2020, to say the website “is calling for violence on 1/6/2021 regarding the election results.” Forty-eight hours later, the FBI decided that tip, and one that called for the armed arrest of lawmakers in D.C., did not “warrant further investigation at this time.”

A report from the FBI’s Norfolk Division One sent to the Washington field office on January 5, 2021, quoted one website user as saying, “Congress needs to hear glass breaking, doors being kicked, and blood from their BLM and Pantifa slave soldiers being spilled. Get violent … stop calling this a march, or rally, or a protest. Go there ready for war. We get our President or we die. Nothing else will achieve this goal.”

A homeland security official based in San Francisco and in charge of a local intelligence gathering unit, or fusion center, instructed Silicon Valley companies in early January to send threats of violence directly to the FBI’s analysis center in West Virginia, because his own outfit lacked the manpower “to keep up with” the “scores of posts.”

The Post cited another homeland security official, this one in Washington, D.C., who compiled an “avalanche” of suspicious activity planned for January 6th, gathered from 80 fusion centers across the United States. Some of them discussed methods for smuggling weapons to create “an informal army,” according to the newspaper. The official even invited the FBI “to see the information in real time as his team collected it.”

By January 4th, The Post wrote, “There was so much material now bubbling up about Jan. 6 that bureau analysts running the FBI’s online portal where social media companies were reporting suspected criminal behavior had begun using a hashtag to track and organize incoming threats: #CERTUNREST2021.” The FBI “received numerous alerts of people vowing to violently confront Congress, but largely regarded social media posts about planning for Jan. 6 — even those discussing bringing firearms, arresting lawmakers and shooting police — as protected First Amendment speech.”

However, senior FBI leaders exuded confidence in addressing concerns expressed by Sen. Mark Warner of Virginia about threats to safety that day. Warner claimed that senior officials at the FBI “on a regular basis” prior to January 6th had “reassured me that they had the resources and appropriate intelligence to take on this threat.”

David Bowdich, at the time the FBI’s second in command and its deputy director, personally assuaged Warner’s fears in a January 4, 2021, phone call.

Just this week, Newsweek released an explosive report that claims Acting Deputy Attorney General Jeffrey Rosen authorized the positioning of elite members of the FBI, U.S. Marshals, and ATF – normally reserved for freeing hostages and responding to the use of weapons of mass destruction – very close to the U.S. Capitolon the morning of January 6tt. In fact, these elite fighters, who possessed “shoot-to-kill authority,” according to Newsweek, were some of the first federal law enforcement officers to enter the Capitol after the initial breach.

Other news organizations have worked to uncover more puzzling circumstances. After exhaustively reviewing court documents of those charged with conspiracy who also belonged to the Oathkeepers organization, Revolver News  noticed that 20 people remained unindicted despite allegedly engaging in the same behavior that had resulted in federal felonious conspiracy charges for others.

Among those who seemed to get a pass was Oathkeepers founder and leader Stewart Rhodes. A U.S. attorney who argued for keeping another Oathkeeper without bail said Rhodes, Person One in this court document, and other Oathkeepers “were plotting to use violence to support the unlawful obstruction of a Congressional proceeding.” Apparently, this justified a federal charge of conspiracy for the other Oathkeepers – but not Rhodes.

Another man who remains curiously unindicted is Ray Epps, who is caught on video at least two times the night of January 5, 2021, urging the crowd in downtown D.C. to enter the Capitol. He precedes both pleas by predicting he will end up in jail for voicing this odd suggestion. After he finishes speaking, in one video, the crowd suspects him of being a federal agent and chants in unison “fed, fed, fed.” More disturbingly, Epps whispers into a man’s ear seconds before the man, along with others, overturns a police barricade of bike racks in what The New York Times considers  to be the “first attack” on the Capitol.

There is an established precedent for the outsized role the FBI plays in its own investigations. Buzzfeed news reported in July 2021 that the FBI had a nearly equal number of informants (12) as people charged (14) in federal and state court for the alleged kidnapping plot of Michigan Gov. Gretchen Whitmer. Well before any plot could be carried out, the alleged participants were arrested. Whitmer knew of the threat for weeks before arrests occurred in October 2020.

To the ordinary observer, unencumbered with a law degree and connections in the surveillance state bureaucracy, this ethically dubious practice would seem to border on entrapment. Indeed, one of the defendants “has formally accused the government of entrapment.”

Interestingly, the head of the FBI’s field office in Detroit overseeing the FBI’s involvement in the Whitmer cases was promoted to “assistant director in charge of the Washington Field Office” days after the October Whitmer kidnapping arrests. Steven D’Antuono is “now working on the Capitol riot cases,” according to Politifact.

The New York Times revealed in late September that there were at least two FBI informants present in D.C. on January 6th infiltrated among members of the Proud Boys, “suggest[ing] that federal law enforcement had a far greater visibility into the assault on the Capitol, even as it was taking place, than was previously known.” One of the FBI informants entered the Capitol on January 6th. The same one also shared screenshots in late December “from an online chat board know to be popular among Trump supporters” from people “planning to bring weapons to Washington in January.”

How many FBI agents and informants were present on January 6th? We don’t know. Matt Gaetz asked this question in a letter to FBI Director Chris Wray on June 15, 2021, but clarity has remained elusive. Rep. Thomas Massie  asked Attorney General Merrick Garland a similar question directly, but he refused to answer, citing Justice Department policy against public comment on pending investigations.

here are also accusations that police officers released pepper spray and tear gas and fired flash bangs without sufficient provocation. Sen. Ron Johnson sought answers from Capitol Police in a letter as to why police officers stood down in a particular entrance to the Capitol, where he estimates that 309 people entered the Capitol. The 14,000hours of video taken in the Capitol would go a long way to answering these questions, but the Capitol Police has refused to release them in their entirety.

The federal government has used the violence of January 6th to justify investigating and prosecuting “domestic terrorism.” The DOJ is seeking $101.2 million in fiscal year 2022, or 62.9% of all new money,  for “enhancements”  to the domestic terrorism budget. That includes hiring 299 new employees, 80 and 60 of which would be new U.S. “attorney/agents” and FBI “attorney/agents,” respectively.

In February 2021, Pentagon spokesman John Kirby said January 6th was the “wake-up call” that led Defense Secretary Lloyd Austen to issue “a directed standdown” of some military operations “to address the issue of extremism in the ranks.” In response to a letter from the National Association of School Boards letter in September accusing parents of “domestic terrorism” Garland directed the DOJ to partner with local law enforcement to “protect” public school employees from angry parents.

But with all the advanced warning of violence detailed by The Washington Post that the FBI received, it seems highly improbable that they could be caughtunawares by the violence on January 6th. And if they were indeed coordinating with a large amount of informants both before and on the day of the 6th, surely on the lookout for potential violence, their lack of readiness is even more inexcusable. The presence of elite federal law enforcement fighters positioned close to the Capitol– as detailed by the Newsweek report– suggests prior awareness and raises the question why those elite fighters were not helping Capitol Police maintain the integrity of their pathetically inept “barriers.”

The stigma associated with someone convicted of an offence on January 6th will be life-altering – whether it be a serious felony conspiracy charge that includes jail time or a misdemeanor for following the crowd and wandering peacefully in and out of the Capitol, hurting no one and destroying nothing and resulting in probation and a $500 fine. Will the convicted ever find employment? Will anyone think of them as anything other than an insurrectionist?

A 7-foot high metal fence and thousands of National Guard troops, many with automatic weapons, turned the Capitol into an army base just days after the 6th. But all the “red flags” documented by The Washington Post and known to the FBI warning of violence planned for the 6th – and the FBI’s secrecy as to the extent of their use of informants and what they knew – raise the question: is it possible the FBI really didn’t anticipate the violence on January 6th? Worse yet, could they have incited some of it?

A Whitmer-like goading of “insurrectionists” would obviously cast doubt on the government’s premise of the existence of a lethal right-wing militia threat that justifies calls for a new war on domestic terrorism. However, even if the FBI were innocent of any incitement, the kindest interpretation of the FBI’s actions – or lack thereof – is cause for concern, to put it mildly.

At best, the massive amount of intelligence received by the FBI prior to January 6th pointing to almost certain violence on that fateful day reveals an undeniable foreknowledge that exposes the FBI as a player in a “setup” or “trap.” How else can one describe a situation caused by the willingness on the part of the FBI to allow violence for political purposes by conveniently looking the other way?

The FBI has some answering to do – both to clear its name of charges of incitement and to explain their curious inaction in the face of so many violent threats.