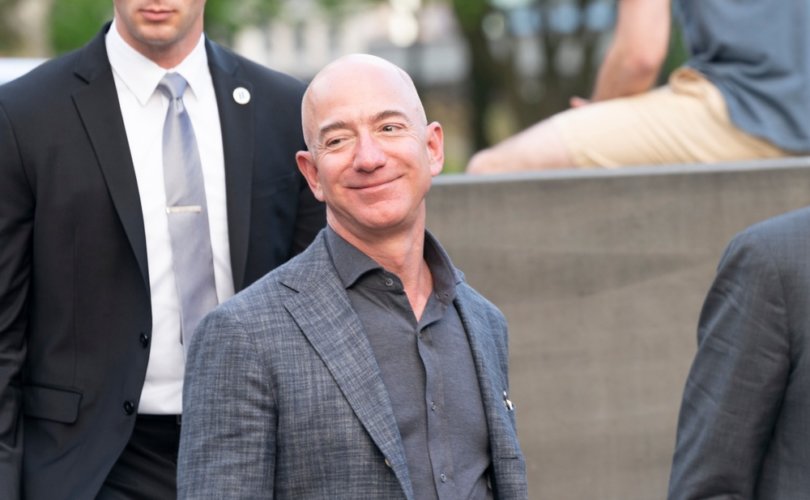 January 6, 2021 (LifeSiteNews) – The world’s 500 richest billionaires collectively added an eye-watering $1.8 trillion to their wealth in 2020, in direct contrast to the many small and mid-size businesses worldwide forced to close due to government-imposed COVID-19 lockdowns.

According to the Bloomberg Billionaires Index which was released on January 4, the world’s richest billionaires' growth in 2020 is the biggest gain in the eight-year history of their index report.

At the top of the richest list is Amazon founder and CEO Jeff Bezos, whose estimated net worth is $186 billion.

He is followed by the founder of Tesla Elon Musk, who increased his wealth to $175 billion. At the start of 2020, Musk was estimated to be worth around $26.4 billion.

According to a Bloomberg report, Musk’s wealth increase is “possibly the fastest bout of wealth creation in history.”

Microsoft co-founder Bill Gates, for the first time in the history of the Bloomberg Index, did not make it into the top two richest people. His wealth stands at $131 billion, which places him in third place behind Musk.

Facebook’s CEO and founder Mark Zuckerberg stands is the world’s fifth-richest person with a total net worth estimated to be around $104 billion.

According to a survey done by the International Trade Centre in 2020, it is mainly small and mid-sized businesses globally who have endured the burden of government-imposed COVID-19 lockdowns, not big corporations with billionaires at the helm.

Chuck Collins, who serves as the director of the Program on Inequality and the Common Good at the U.S.-based Institute for Policy Studies, said that the massive surge in wealth by billionaires undermines the common COVID catchphrase that we are all “in this together.”

“Surging billionaire wealth hits a painful nerve for the millions of people who have lost loved ones and experienced declines in their health, wealth, and livelihoods,” Collins was quoted as saying in the Bloomberg report.

— Article continues below Petition —
PETITION: No to government and corporate penalties for refusing COVID-19 vaccine
Show Petition Text
102965 have signed the petition.
Let's get to 125000!
Thank you for signing this petition!
Add your signature:
Show Petition Text

“Worse, it undermines any sense that we are `in this together’ — the solidarity required to weather the difficult months ahead.”

Klaus Schwab of the World Economic Forum, with the backing of the United Nations, has called for a “Great Reset” of the world’s economic systems, which has the backing of many major world leaders and billionaires such as George Soros.

Archbishop Carlo Maria Viganò has warned that the “Great Reset” is nothing more than a plan by the world's billionaires to bring about a globalist socialist surveillance state.

Viganò has described the “Great Reset” as the “final revolution.”

“The French Revolution wiped out the Western aristocracy…The Industrial Revolution obliterated the peasants and spread the proletarianization which led to the disaster of Socialism and Communism…The Revolution of ’68 demolished the family and the school,” wrote Vigano.

“This Great Reset, desired by the globalist elite, represents the final revolution with which to create a shapeless and anonymous mass of slaves connected to the internet, confined to the house, threatened by an endless series of pandemics designed by those who already have the miraculous vaccine ready.”

In December, Pope Francis called for a new “economic system” after launching a collaboration called the “Council for Inclusive Capitalism with the Vatican.”

This partnership with high-level global corporations such as the Rockefeller Foundation and Mastercard is based on the United Nations’ Sustainable Development Goals. The Council’s guiding principles state that “capitalism must evolve to promote a more sustainable, trusted, equitable, and inclusive system that works for everyone.”

In November, LifeSiteNews reported that the Gates Foundation has used its financial prowess to back Microchips Biotech, which is a company that designs a type of contraceptive microchip commissioned directly by Gates himself.

In March of 2020, Gates said “Eventually we will have some digital certificates to show who has recovered or been tested recently or when we have a vaccine who has received it.”

In June, Amazon temporarily blocked the sale of a booklet regarding COVID-19, which was penned by a journalist whose views on the virus run contrary to the mainstream media narrative.

This caused Musk to call for the breakup of Amazon, who implied that Bezos and his company Amazon is a monopoly, saying, it’s “Time to break up Amazon. Monopolies are wrong!”

Meanwhile Musk has also said that he will not take a COVID-19 vaccine and called Gates a “knucklehead.”

Last year Musk also called into question the accuracy of COVID-19 tests after testing positive and negative twice in the same day, with the same machine, saying that something “extremely bogus is going on.”