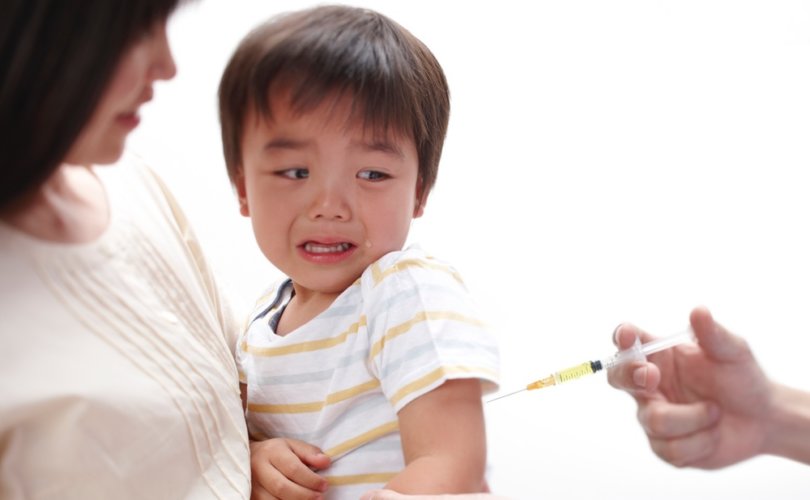 (LifeSiteNews) — Days before the federal government is set to decide whether to authorize the experimental COVID-19 shots for young children, an analysis of reports submitted to the U.S. government’s Vaccine Adverse Event Reporting System (VAERS) stated that at least 58 infants under age three have suffered life-threatening adverse events after receiving the mRNA coronavirus injections.

The analysis, conducted by Ranit Feinberg and Yaffa Shir-Raz and published by independent Israeli news outlet Real Time (RT) Magazine, noted that it’s “unclear why the infants were vaccinated,” since the shots are not yet approved for babies by the U.S. Food and Drug Administration (FDA).

2. The FDA is concealing 58 cases of serious adverse events reported to VAERS – most of them multi-systemic injuries and in some cases possibly even death >>

The FDA is slated to review the safety and efficacy of the COVID jabs for young children under age five on June 15 to determine whether to grant an Emergency Use Authorization (EUA) to vaccinate young children. The federal agency has stated the mRNA jabs made by Pfizer appear to be “safe and effective” for kids under five.

“Most reports do not specify under what circumstances the infants were vaccinated, and if they participated in the clinical trials,” the analysis noted.

In one report highlighted by Feinberg and Shir-Raz (VAERS case number 1015467), a two-month old British baby boy presented with cold, clammy skin and was found to have suffered chest pain and cardiac arrest just one hour after receiving a Pfizer-BioNTech COVID-19 shot.

The infant’s condition reportedly stabilized and he was transferred for additional treatment. However, the authors of the analysis noted that “the outcome of the events was unknown,” despite the fact that the case was reported as serious and life-threatening.

Feinberg and Shir-Raz explained that the individual who filed the VAERS report was uncertain whether the infant had been enrolled in Pfizer’s clinical trial to determine the efficacy of the jabs for babies and young children.

The authors argue, however, that since the report was ”received from a contactable Other Health Care Professional by Pfizer from the Regulatory Agency,” the two-month-old child may have been included in the pharmaceutical giant’s drug trial.

“Why did they not follow up on the 2-month-old baby’s condition, after going into cardiac arrest an hour after receiving an experimental vaccine?” Feinberg and Shir-Raz queried. “Why is there no further information? Is it because he died? Or was the baby removed [from] an experiment? Why would the author of the report not mention this?”

“Shockingly, it turns out that this incident is not isolated, but in fact one of many in the VAERS system, describing babies and children under five exposed to mRNA Covid vaccines, who suffered life-threatening adverse reactions,” they wrote.

While the section for noting whether or not the patient died was marked “No,” the recovery section was also marked “No.”

“What then happened to her?” Feinberg and Shir-Raz asked. “Is she alive or did she die?”

In this and many other cases, the authors of the analysis noted, the VAERS report fails to provide details or follow-up information.

In addition to highlighting individual cases, the authors of the RT Magazine analysis pointed out that the FDA appears to have concluded that the jabs are safe based on minimal data.

According to the analysis, despite the FDA’s claim that the COVID-19 vaccine efficacy rate for infants is 80.4%, “the claim is based on a total of 10 symptomatic cases of COVID-19 identified in the trial among 1415 participants – 7 of them in the placebo group vs. 3 in the vaccine group.”

The FDA’s briefing document — released ahead of the June 15 meeting in which the FDA will consider awarding an Emergency Use Authorization (EUA) for the Pfizer and Moderna mRNA jabs for young children — stated that there have been 245 U.S. reports of adverse events in children age six months to four years post-vaccination.

Observing that reports in children under four years old may have been instances of “unauthorized use of the vaccine or … a reporting error,” the document states that “the majority (96.3%)” of reports “were non-serious.”

According to the document, “No unusual frequency, clusters, or other trends for adverse events were identified that would suggest a new safety concern.”

However, Feinberg and Shir-Raz challenged whether that conclusion is “really the case.” Still, “regardless of the results, and despite the disturbing and shocking findings that are being exposed from Pfizer’s documents,” the authors believe “it is expected that both companies will receive the desired EUA very soon.”

“In fact, the CDC website, already in April, had advertised a protocol regarding children’s vaccination, which included babies 6 month to 4 years as well,” they pointed out.

While Moderna and Pfizer “have not yet released the safety data from their trials” on the six months to four years age group, Feinberg and Shir-Raz argue that “one thing is clear from the VAERS reports: There were many babies who were injured after receiving the vaccine.”

Meanwhile, this isn’t the first analysis to link the experimental COVID-19 shots with severe adverse events in babies. Prior reviews of clinical data have highlighted troubling indications that the jabs could be dangerous for pregnant women and their unborn babies.

LifeSiteNews reported that, according to another analysis of VAERS data conducted by Maria Ziminsky and Linnea Wahl at Daily Clout between December 2020 and March 2022, a total of 3,816 unborn babies were reported to have died after their mothers received COVID shots – 57% of the overall number spanning 25 years.

READ: COVID shots account for more than half of all vaccine-associated miscarriages: VAERS data

Almost 74% of the reports came from users of the Pfizer/BioNTech vaccine, with 21% having taken the Moderna shot and less than 5% the Janssen (Johnson & Johnson) injection.

The Daily Clout analysis was conducted using data obtained from the FDA after a Freedom of Information Act (FOIA) lawsuit. Before a court order requiring the release of the documents they reviewed prior to authorizing Pfizer’s COVID injections, the FDA had asked for 75 years to fully release the information.

Reports include babies that abruptly stop growing or experience a stroke in utero; malformed babies; a baby dying from an inflamed placenta; and a baby born fatally bleeding from its mouth, nose, and lungs.