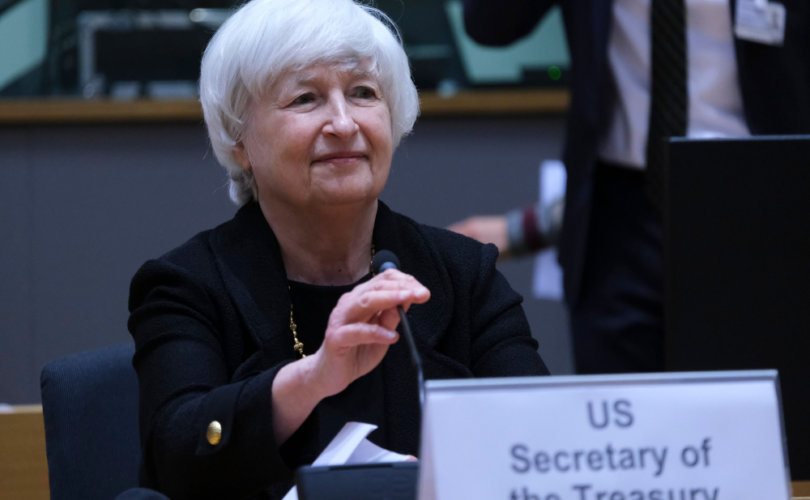 (LifeSiteNews) — A recent report released by Republicans on the Joint Economic Committee (JEC) proved that, beyond immorality, abortion has a long-term negative impact on the country’s economy.

The report came about in response to the Secretary of the Treasury Janet Yellen’s continued commentary and declarations that abortion is necessary for a thriving economy.

“The tragic loss of over 600,000 innocent lives in 2019 cost the U.S. about $6.9 trillion,” Republican U.S. Sen. Steve Daines of Montana told LifeSiteNews in a statement. “Aside from the deep moral scars that abortion leaves, killing unborn children undoubtedly shrinks our workforce, weakens our economy and costs the U.S. trillions of dollars.”

In its opening remarks, the new report outlines the opposing claims from Yellen.

“Since the Supreme Court’s 1973 Roe v. Wade decision, some economists have argued that unrestricted abortion provides economic benefits for women and the economy at large,” the report begins.

Most recently, during questioning at a Senate Banking Committee hearing, Yellen testified that restricting access to abortion “would have very damaging effects on the economy” by harming women’s labor market outcomes and increasing the odds they fall into poverty.

The Joint Economic Committee immediately countered this argument by listing its estimated cost of abortion.

“Applying standard valuation methods used by government agencies to assess the costs and benefits of policy actions that affect mortality risks, we estimate that the economic cost of abortion to unborn babies in the U.S. was $6.9 trillion in 2019, 32 percent of gross domestic product (GDP) that year,” the report states. “This cost is 425 times larger than the $16.2 billion loss in earnings that new mothers would be expected to incur over the first six years of the child’s life.”

The report begins by noting studies conducted before the Roe v. Wade decision in 1973. These studies examined the impact of abortion access in five states that had fewer rather than more restrictions.

“These studies generally find that increasing abortion access reduced the number of babies born, and increased women’s educational attainment, labor force participation, and wages,” the report states. “A study based on longitudinal data since 2008 finds that women denied an abortion due to narrowly missing the time limit based on the baby’s gestational age are more likely to experience financial distress during the next five years.”

Acknowledging the seemingly easier path to education and employment after choosing abortion, the Joint Economic Committee goes on to argue that the so-called “motherhood penalty” of limited income due to raising a child is greatly outdone by the losses caused by abortion.

“Studies of the economic benefits of abortion fail to consider its far greater cost, the increased risk of mortality of unborn babies,” the report continues. “Economists have developed rigorous methods for quantifying the cost of an increased risk of mortality, and federal government agencies use these values to estimate the costs and benefits of policies that involve mortality risk.”

According to the report, the senators used a value of statistical life (VSL) as their method of cost-benefit analysis, a commonly used method within the federal government. To determine an estimated economic cost of increased mortality risk because of abortion, the number of abortions in a year was multiplied by the Department of Transportation’s VSL ($10.9 million in 2019).

That same year, there were “629,898 legal abortions in the U.S., covering 47 states and the District of Columbia,” according to the Centers for Disease Control and Prevention (CDC) records. The total estimation from the calculation came to $6.9 trillion.

“This understates the total cost of abortion because it omits illegal and unreported abortions, including all abortions performed in California, Maryland, and New Hampshire.”

The report goes on to illustrate that if the income of first-time mothers drops roughly $26,000 during a child’s first six years, that average can be applied to “all mothers of the 630,000 aborted babies in 2019.” As a result, abortion is shown to “prevent $16.2 billion in lost earnings during the first six years of the child’s life.”

After outlining the details of the estimation, the report concludes with an acknowledgement that the problem of abortion affects more than one specific area of debate.

“Abortion at its core is a moral issue rather than an economic one. But even in economic terms, arguments that abortion positively affects the economy fail to recognize the cost of abortion to unborn babies and to society more broadly,” the report states.