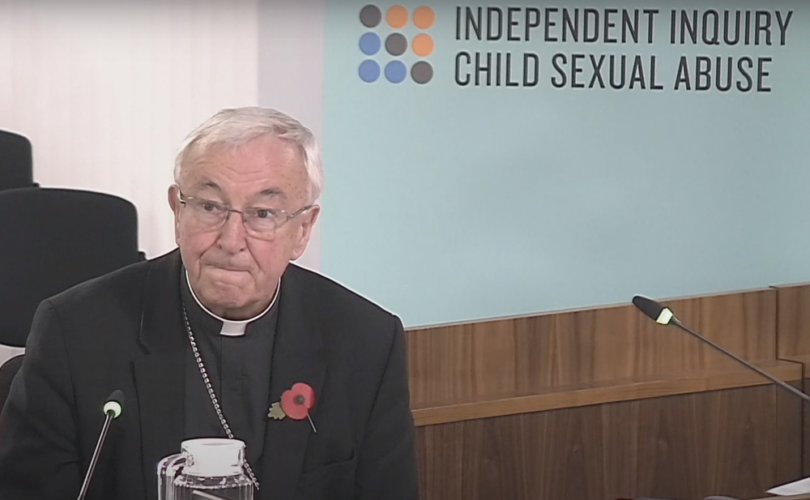 LONDON, U.K, November 17, 2020 (LifeSiteNews) – An independent inquiry into the Catholic Church’s response to child sex abuse in England and Wales has given a damning report on Cardinal Vincent Nichols as well as the role played by the Holy See and the papal nuncio. It also sheds further light on the cover-up of the investigation of Cardinal Cormac Murphy-O’Connor’s alleged sexual abuse.

Just hours before the McCarrick report was released, the Independent Inquiry into Child Sexual Abuse (IICSA) released its 150-page report, detailing the Church’s response to child sex abuse in England and Wales. It gave explicit details of the nature of such abuse, particularly outlining the failings of Nichols.

The new IICSA report states that between 1975 and 2015, the Catholic Church in England and Wales “received more than 900 complaints involving over 3,000 instances of child sexual abuse against more than 900 individuals connected to the Church, including priests, monks and volunteers. In the same period, there were 177 prosecutions resulting in 133 convictions.”

Between April 2014 and July 2019 there were a further 203 allegations of child sexual abuse reported.

The report notes that, historically, abuse “was swept under the carpet” and that more recently, “weaknesses in leadership were significant in the failures to address child sexual abuse.”

Chair of the inquiry, Professor Alexis Jay, stated that “[i]t is clear that the Church’s reputation was valued above the welfare of victims, with allegations ignored and perpetrators protected.”

However, the IICSA singles out Nichols, giving extensive evidence that he had a “misplaced desire to give priority to the protection of the reputation of the Church, the Pope and Cardinal Murphy-O’Connor,” instead of properly dealing with victims of abuse. It further mentions “nor did he demonstrate compassion towards victims in the recent cases which we examined.”

Richard Scorer, a solicitor for Slater and Gordon, who represented 32 victims, said: “This is an absolutely damning report. It highlights the shocking scale of abuse, the disgraceful slowness of the church’s response, the abject failures of leadership by Cardinal Nichols, and the Vatican’s appalling refusal to cooperate properly with the inquiry. Cardinal Nichols needs to resign right away – in any other walk of life he would be gone immediately.”

The report records two specific cases of neglect by Nichols, of which one details a woman, dubbed RC-A710, who claimed to have been abused in the 1960’s by Father Michael Hill. In 2008, she then also stated that Cardinal Cormac Murphy O’Connor had been involved in the abuse.

Murphy-O’Connor was named Bishop of Arundel and Brighton in 1977, and then made Archbishop of Westminster from 2000 until 2009, when he was succeeded by Nichols.

Murphy-O’Connor was an old friend of Cardinal Bergoglio and also a member of the Saint Gallen Mafia, which led to him being tasked with prepping Bergoglio for the group’s plan to elect him, as well as lobbying cardinals to support Bergoglio. In a book detailing the election of Pope Francis, Murphy-O’Connor was described as a “kingmaker.” He later died in 2017.

When questioned by police, Murphy O’Connor denied the abuse allegations levelled against him, although in a 2018 article, LifeSiteNews’s Maike Hickson and John-Henry Western, noted that “the police took the case so seriously that they interviewed Cardinal Murphy-O’Connor himself ‘under caution,’ which means that they made it clear to him that his answers could be used against him in court.” The police left the case open, awaiting further evidence.

In 2011, the case then went to the Congregation for the Doctrine of the Faith (CDF), but when asked by the CDF about the case, Nichols said that it “should now be regarded as completed and closed.” The CDF agreed with Nichols.

Despite this declaration from the CDF in 2011, an English source close to the case previously told LifeSiteNews that Portsmouth and Northampton Dioceses “complained to Rome” in 2013, to re-open the investigation. Both bishops knew the woman personally, as confirmed by the IICSA hearings.

Maike Hickson reported for LifeSiteNews that in 2013 Pope Francis directly told Cardinal Müller, then head of the CDF, to cease the newly opened investigations regarding the allegations RC-A710 made against O’Connor. When questioned about the incident, Cardinal Müller affirmed the investigation had been stopped, and added that it did not have the Pope’s approval. This event was corroborated by Archbishop Viganò in his September 27, 2018 letter.

The IICSA reports that in September 2018 RC-A710’s confidential details were then leaked to media, resulting in the story being widely reported in Europe and the U.S.

Bishop Egan of Portsmouth Diocese wished to apologise to the woman, but was told by Nichols to do nothing, and that Westminster would handle the case. Furthermore, the communications director of the Catholic Bishops Conference of England and Wales also told the bishops not to issue any statement. Nichols then pressured Bishop Egan and Bishop Doyle of Northampton, to say nothing.

The two bishops again wrote to Nichols in May 2019, requesting that the case be re-opened, to which Nichols did not reply. Egan stated that he believed Nichols refused to take action, due to his concerns that such a statement could be linked to the testimonies of Archbishop Carlo Maria Viganò, and be used to attack Pope Francis.

Despite Cardinal Nichols’ denial that such was his chief motive, his statement was contradicted by Bishop Egan, Bishop Doyle, the Portsmouth safeguarding commissioner, and by the IICSA report itself, which states: “the primary focus of Cardinal Nichols’ concern was the impact of Bishop Doyle’s statement on the reputation of the Church and the Pope.”

Doyle wrote to the victim, saying that there would be no public statement of apology issued to her, as Nichols believed it “would be used by sections of the media internationally to get at Pope Francis.” LifeSiteNews was specifically mentioned as one such media outlet, both in Doyle’s letter, and in Nichols’s hearing.

The IICSA noted that when questioned, Nichols still refused to “accept that he had let her down or left her without support.” He is quoted as saying, “I think she’s had substantial, fundamental, unfailing support given in the name of the Church.”

The report summarizes: “he was particularly concerned about the impact the leak would have on the reputation of Cardinal Murphy-O’Connor, rather than the impact the disclosure of RC- A710’s personal information had on her. In the 13 months between the leak and the final public hearing, RC-A710 had not received an apology from Cardinal Nichols. It appears that he did not do so as a result of his misplaced desire to give priority to the protection of the reputation of the Church, the Pope and Cardinal Murphy-O’Connor.”

Criticism of the Holy See

The IICSA report also commented on the response to the inquiry from the Papal Nuncio to the U.K as well as the Holy See itself.

As for the information which the Holy See did send the inquiry, the report described it as doing “little more than confirm the bishops’ authority within their own dioceses and provide documents already within the public domain.”

The report also criticised the Holy See heavily, stating that the actions of the Holy See in relation to the inquiry, were in contrast to the Pope’s 2019 words promising more action to resolve child sexual abuse: “the Holy See’s stance was contrary to the spirit of its public statements.”

In sum, the report concluded that: “The Holy See’s limited response on this matter manifestly did not demonstrate a commitment to taking action. Their lack of cooperation passes understanding.”

Previously, in the IICSA 2019 investigation into Ealing Abbey, Nuncio Adams had been approached for a statement, but, after much attempted contact with the Vatican “no information was provided” from either party prior to the hearing.

Just the day before the IICSA report was released, Nichols released a letter saying that his resignation as Archbishop of Westminster had been accepted by Pope Francis due to his age, although he was to remain in office until “other provision is made.”

However, the next day Nichols presented a different interpretation of his message when responding to calls for his resignation in the wake of the IICSA report: “I sent my resignation into Pope Francis and I have received a very unequivocal reply, and that is that he tells me to stay in office here…I do what I’m told. The Holy Father put me here and he tells me to stay here – that’s enough for me.”

U.K. media outlets even reported that Nichols had suggested that Francis had turned down the cardinal’s resignation.

In a video response to the report, Nichols spoke to victims of abuse, claiming “I understand something, something of what you live with, of what you’ve gone through.”

The BBC noted that one victim of sexual abuse who testified in the inquiry, said that “thousands of pounds have been spent by the Diocese of Westminster in employing lawyers to keep me at arm’s length.”

U.K. newspaper The Guardian reported that “[o]ne survivor represented by Slater and Gordon who gave evidence before the inquiry” stated: “Vincent Nichols will retire with a full pension – meanwhile, the victims that he denied justice to have to live on, still suffering.

“The fact is Nichols is a serial protector of paedophiles and he is the person that you should least expect it from,” they continued.

“The head of a church should have the greatest morals of all but instead they were sending paedophiles to other areas of the country – and America – in an attempt to cover the abuse up.”

A lawyer for Slater and Gordon noted that the report contains “some of the most severe criticisms of a public figure ever made by a public inquiry,” and that it “comes close to concluding that Cardinal Nichols misled the inquiry.”

Noting that Nichols was described as lacking moral leadership, Deacon Nick Donnelly, a prominent commentator on Catholic news, described the report as a “[d]amning conclusion about someone who claims to be a successor of the apostles & follower of Christ.”

Deacon Donnelly added, it “exposes the sham of the Vatican’s claim to take clergy sex abuse of children seriously. Lying comes easily in the Empire of Dirt.”