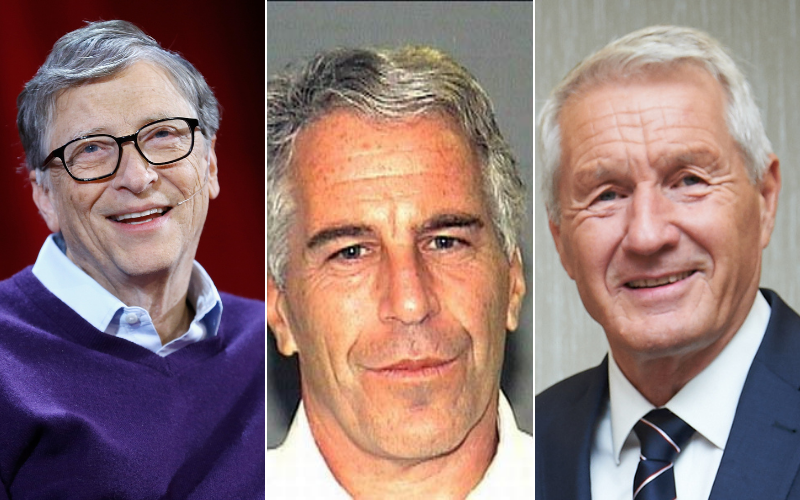 October 6, 2020 (LifeSiteNews) – Deceased convicted pedophile Jeffrey Epstein attended a 2013 meeting with Bill Gates and may have been instrumental in establishing connections between Gates and a think tank involved in the production of vaccines, according to a recently published investigative report by DN Magasinet (commonly referred to as DN), Norway’s third-largest newspaper.

“They came to my Residence with their respective delegations. Bill Gates and Epstein arrived together, followed by the others. I made an introduction on the European system for controlling medicines,” Thorbjørn Jagland, a former Prime Minister of Norway and Former Nobel Committee chair told the newspaper via email.

“Also present were representatives of the think tank International Peace Institute (IPI), who later that year partnered with Gates' foundation in the fight against polio,” the newspaper reports.

Jagland explained that “Bill Gates and IPI had entered a collaboration to provide polio vaccines to the vulnerable tribal areas in Pakistan and Afghanistan.” But the DN report notes that “[at] the time, IPI didn't have a relationship with Gates. The first grant came a few months later, in October 2013.”

At the time of the meeting Gates was considered to be a potential recipient of a Nobel Peace Prize because of his work with the Bill & Melinda Gates Foundation.

DN says that it “has spoken to a number of sources familiar with the meeting in Strasbourg, and has reviewed documentation that ties Epstein to the meeting” and that, according to their sources, “Epstein, who knew Gates, was the person that introduced the billionaire to IPI.”

“The meeting, where IPI introduced Gates to a polio eradication project, was to be very successful. Later the same year, Gates' foundation granted IPI 2.5 million dollar[s]. Since then, an addition 6 million dollars has followed, according to the foundation. The most recent grant was earlier this year, with an additional 250,000 dollars,” the DN report notes.

Epstein was arrested and officially charged in July 2019 with one count of sex trafficking of minors and one count of conspiracy to engage in sex trafficking of minors in a high-profile case that was believed to implicate many prominent figures around the world. He then allegedly killed himself in his cell at New York’s Metropolitan Correctional Center (MCC) in August 2019.

Epstein was previously accused of sexually abusing dozens of teenage girls in Florida in 2007. He avoided federal prison by striking a deal with state authorities that resulted in him being sentenced to 13 months in a county jail and registering as a sex offender.

Curiously, as recently as December 2019, Jagland claimed to have never had any contact with Epstein.

Last year DN wrote to Berit Reiss-Andersen, the current chair of the Nobel committee, asking if any of the committee (of which Jagland is still a member) had ever had contact with Epstein.

“I passed DN's questions to Jagland and he answered in the negative on any contact with Epstein,” Reiss-Andersen told DN.

“Yesterday, Jagland explained there was a misunderstanding, which I accept. Naturally, it's unfortunate that I gave an answer that turns out not to be correct,” she continued before adding that “it is obviously unfortunate that DN was misinformed.”

Jagland explained his original claim that he had never met Epstein by saying: “I had in mind DN's crazy and absurd conspiracy theory that I had had dinner with this person in Paris in June. There might have been a misunderstanding, which I take full responsibility for, and apologise.”

In September 2019 Gates told the Wall Street Journal that, although he had met Epstein, he “didn’t have any business relationship or friendship with him.”

In October 2019 the New York Times reported that “[in] fact, beginning in 2011, Mr. Gates met with Mr. Epstein on numerous occasions — including at least three times at Mr. Epstein’s palatial Manhattan townhouse, and at least once staying late into the night, according to interviews with more than a dozen people familiar with the relationship, as well as documents reviewed by The New York Times.”

In November 2019 Gates told the New York Times DealBook conference that he had “made a mistake in judgment” by spending time with Epstein and that he “thought that that those discussions would lead literally to billions of dollars going to global health.”

“Turned out that was a bad judgment, that was a mirage, none of that money ever appeared,” Gates said.

DN’s report says that The Bill & Melinda Gates Foundation responded to inquiries stating that “The foundation has never had any financial dealings with Epstein.”

“We work with the International Peace Institute, a grantee that supports our efforts to improve health in Pakistan and Afghanistan,” they told the Norwegian newspaper.

But the DN report then notes that “IPI has several links to Epstein, including through a donation of 375,000 dollars from one of his foundations. Several press releases from Epstein's organisations are about the partnership with the think tank.”

In April this year, while speaking about the coronavirus crisis and international lockdowns, Gates told the Financial Times that  “normalcy only returns when we’ve largely vaccinated the entire global population.” During the interview Gates interrupted his own reflections on the wide-ranging impacts of the coronavirus crisis, saying “you don’t have a choice,” although it is unclear exactly what he meant by the comment.

A number of other leading global figures, such as former U.K. Prime Minister Tony Blair, have called for the creation of digital IDs to track “disease status” as part of the plans for responding to the coronavirus crisis.

A December 2019 article in Scientific American reported that research at the Massachusetts Institute of Technology (MIT) for embedding vaccine records “directly into the skin” of children came about due a direct request from Gates.

Robert F. Kennedy, Jr., nephew of former U.S. president John F. Kennedy and an American environmental attorney and author, has been outspoken in outlining reasons for concern about various vaccine projects, including those that receive funding from Gates. Kennedy has been raising awareness about children injured by vaccines since before the coronavirus outbreak.

In an April 9, 2020 article, Kennedy wrote: “Vaccines, for Bill Gates, are a strategic philanthropy that feed his many vaccine-related businesses (including Microsoft’s ambition to control a global vaccination ID enterprise) and give him dictatorial control of global health policy.”

In a recent online debate on mandatory vaccinations Kennedy pointed out that a significant percentage of participants in a recent trial for a leading coronavirus vaccine have been hospitalized.

Kennedy also noted that several of the coronavirus vaccine developers, a number of which have received funding from Gates, have been forced to pay billions of dollars in criminal penalties related to their medical products.

Last month the World Health Organization (WHO) linked polio outbreaks in Africa to oral polio vaccines. Gates is one of the leading global funders of oral polio vaccines in Africa and around the world, with Devin Thorpe, a collaborator with Gates on polio related initiatives writing in Forbes last year that Gates has “personally [driven] the development” of new oral polio vaccines and plays a “strategic role beyond funding.”