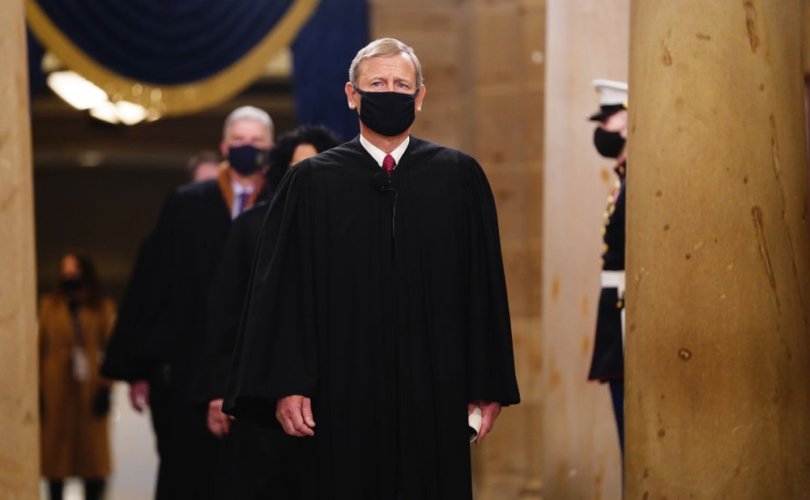 (LifeSiteNews) — U.S. Supreme Court Chief Justice John Roberts had attempted to lobby fellow conservatives on the Court not to overturn Roe v. Wade but was stymied by the leaked draft that indicated the justices were poised to roll back the 1973 decision, a recent CNN report suggested.

Chief Justice John Roberts privately lobbied his fellow conservatives to save the right to abortion until the end. An unprecedented leak sealed its fate https://t.co/Zemgs7bFFk

“Multiple sources told CNN that Roberts’ overtures this spring, particularly to Kavanaugh, raised fears among conservatives and hope among liberals that the chief could change the outcome in the most closely watched case in decades,” Biskupic reported.

According to Biskupic, however, after Politico published the leaked draft of the Supreme Court’s Dobbs decision in May, “Roberts’ persuasive efforts, difficult even from the start, were thwarted by the sudden public nature of the state of play.”

The CNN legal analyst noted that Roberts’ “best prospect” for switching a vote, Justice Kavanaugh, may have been more likely to steer clear of the monumental decision to roll back 49 years of federal abortion precedent. However, Biskupic said “[i]t appears unlikely that” Kavanaugh “was ever close to switching his earlier vote, despite Roberts’ attempts that continued through the final weeks of the session.”

Whether or not Roberts would have been successful in swaying Kavanaugh or any conservative justices to shy away from overturning Roe, CNN suggested the unprecedented leak of Justice Samuel Alito’s majority opinion sealed the deal.

“To the extent that liberals had hoped that the original vote by conservatives would change, that hope faded,” Biskupic wrote, adding that the leak had “accelerated the urgency of the conservative side to try to issue the opinion before any other possible disruptions.”

According to the CNN legal analyst, the “Alito draft leak seal[ed] the vote count.”

Apparently unsuccessful in any alleged attempts to get fellow conservatives to take a less significant position in the Dobbs case, Roberts nonetheless broke off from the Court’s majority himself, when he issued a separate concurring opinion arguing that the Court should have upheld Mississippi’s right to regulate abortion while stopping short of reversing Roe.

The Tuesday CNN report has drawn considerable attention back to the leak itself, an unprecedented move in what was arguably one of the Supreme Court’s most consequential decisions in decades.

After Politico published the leaked draft in May, the U.S. Supreme Court responded with shock and condemnation, calling the leak “the gravest, most unforgivable sin,” and predicting it would cause an “earthquake” inside the Court and erode “trust among the Justices and staff.”

In the immediate aftermath, conservatives decried the leak as a “tactic” to “intimidate” the Court, or even an “insurrection” to gin up opposition to a legitimate branch of government. Democrats largely expressed outrage over the contents of the draft, rather than the unprecedented way in which it became public.

Justice Roberts himself blasted it as a “singular and egregious breach,” and promised that Supreme Court Marshall Gail Curley would conduct an investigation.

Months after the leak, however, the identity of the leaker remains unknown.

“So are we ever going to find out who leaked the Dobbs decision? Or just like … nah?” wrote Daily Wire podcaster Michael Knowles in a July 14 tweet.

So are we ever going to find out who leaked the Dobbs decision? Or just like…nah?

“We’re several months in and law clerks and permanent employees have been asked to turn over electronic devices,” Biskupic said in the Tuesday CNN piece. “They’ve continued with the search. Nobody has been caught and there’s just a lot of skepticism inside, that despite how aggressive the investigation has gone, that they are not close to finding out who it is.”

While the investigation into the leaker’s identity appears to have hit a wall, Biskupic’s article has renewed speculation, largely on the left, that the leaker may have been conservative rather than a leftist staffer bent on intimidating the pro-life Court.

The notion that the leak was a conservative scheme to pressure the justices to reverse Roe was a parallel theory that emerged in the aftermath of the leak. Some left-wing publications had begun hypothesizing that the leaker may have been conservative, though The Slate admitted it wasn’t “necessarily the likeliest” scenario.

Despite supposition about a potential “anti-abortion” clerk, the immediate consensus among many appeared to have been that the leak was a left-wing job. In the early days after the draft was published, many leftists had even hailed the leaker as a “hero” who allegedly made a last-ditch effort to save the federal “right to abortion.”

Responding to CNN’s Tuesday report, NBC’s Joe Scarborough, however, took the opportunity to renew his long-held belief in the conservative leaker theory, demanding, “Who was the far right leaker?”

CNN and MSNBC commentator and attorney Tristan Snell similarly opined that “the SCOTUS leak came from the right, to lock in Kavanaugh,” suggesting that the leak forced Kavanaugh to stick with his initial, more hard-line vote, to avoid appearing to have “caved to liberal pressure.”

“It’s increasingly obvious that a conservative leaked Dobbs and achieved their goal of locking in Kavanaugh’s vote,” echoed Slate senior writer Mark Stern, going so far as to broadly hint that Justice Clarence Thomas had given the breach the green light.

It’s increasingly obvious that a conservative leaked Dobbs and achieved their goal of locking in Kavanaugh’s vote. Quite possibly with the approval of a Republican-appointed justice. Most likely Thomas chambers. https://t.co/Q2z46HhyIT

Meanwhile, some have said that the CNN article suggesting that the leak ultimately benefited conservatives, drawing the ire of the left, could speed up the investigation into the leaker’s identity.