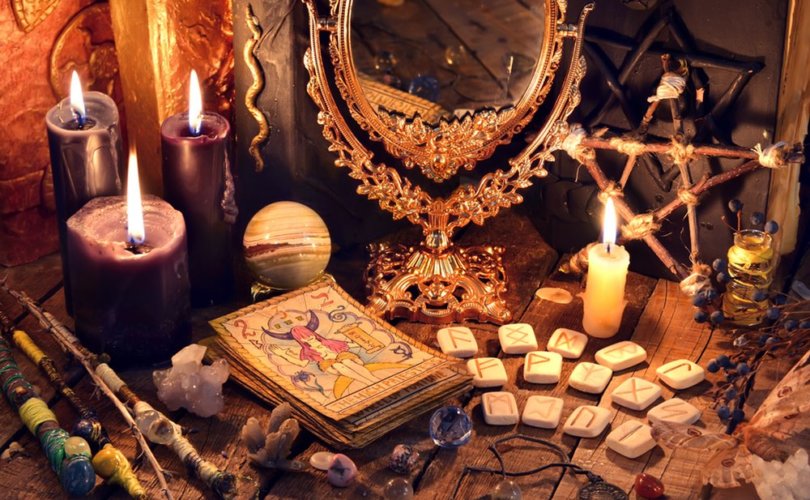 October 11, 2018 (LifeSiteNews) – Recent decades have seen a dramatic rise in paganism and the number of Americans identifying as witches while Christian denominations have been losing members, according to a new report.

Last week, Quartz published a piece reviewing religion survey data from Connecticut’s Trinity College covering 1990 to 2008, and from Pew Research Center covering 2014 to the present. They report that the United States’ Wiccan population skyrocketed from 8,000 in 1990 to 340,000 in 2008, a year that also found roughly 340,000 self-described Pagans.

“The best source of data on the number of witches in the US comes from assessments of the Wicca population,” Quartz’s Sangeeta Singh-Kurtz and Dan Kopf explain. “Not all people who practice witchcraft consider themselves Wicca, but the religion makes up a significant subset.”

Pew currently puts the percentage of self-identified Wiccans or Pagans at 0.3 percent, and those who self-identify as atheist, agnostic, or otherwise unaffiliated at 22.8 percent.

Singh-Kurz and Kopf suggest witchcraft’s popularity is due to a combination of factors, from the longtime allure of witches in media and literature to contemporary rebranding of witchcraft as having more to do with nature and individuality than demons and the occult.

“As [Quartz’s Alden] Wicker noted, witchcraft is the perfect religion for liberal millennials who are already involved in yoga and meditation, mindfulness, and new-age spirituality,” they write. “With that foundation, they might show up for pagan holidays or new moon gatherings, or begin to explore the more serious spiritual concepts at the root of these practices.”

Wiccan websites such as The Celtic Connection and the Church and School of Wicca promote this impression, with the former claiming that witchcraft “fosters the free thought and will of the individual, encourages learning and an understanding of the earth and nature,” and the latter invoking “self-empowerment through knowledge.”

The truth is far darker however, Christians say. The Catholic Church teaches that “all forms of divination are to be rejected,” and any efforts to “tame occult powers, so as to place them at one’s service and have a supernatural power over others” are “gravely contrary to the virtue of religion.”

“When it comes to what ultimately counts, witchcraft and Christianity (but not witches and Christians) are mortal foes,” Richard Howe of the Christian Research Institute explains. “Without the sacrifice of Christ to wash away our sins and reconcile us to our Maker, there is no hope in the world to come. Witchcraft teaches that our destiny is to return again to this world through reincarnation.”

More than 70 percent of Americans still identify as Christian, but religious affiliation has been on the decline for years. An ABC News/Washington Post poll released in May found that self-identification with Protestant denominations dropped eight percent over the previous 15 years (Catholicism held constant). The share of Americans with no religious affiliation almost tripled from 1990 to 2017.

“It makes sense that witchcraft and the occult would rise as society becomes increasingly postmodern. The rejection of Christianity has left a void that people, as inherently spiritual beings, will seek to fill,” author Julie Roys told the Christian Post. “It’s tragic, and a reminder of how badly we need spiritual revival in this country, and also that ‘our struggle is not against flesh and blood, but against the powers of this dark world.’”

“The Church needs to wake up to the reality of this realm and begin to approach it from a Kingdom perspective which understands its place and purpose,” Wanda Alger of Intercessors for America and Winchester, Virginia’s Crossroads Community Church argues. “The sad thing is that these millennials who are exploring the dark side of the supernatural have more faith and belief than most Christians. Because they are open and spiritually hungry, the spirit realm responds. The biggest hindrance to understanding the realities of the Spirit realm is unbelief.”

Another element in the rise of witchcraft is its use by the anti-Trump movement. There is a movement of at least 13,000 people who promise to cast “binding spells” against President Trump, an effort that has been celebrated by the liberal media. The rituals this movement practices invoke the assistance of “demons of the infernal realms” and other spirits.

In 2017, iconic fashion magazine Vogue encouraged women frustrated at the current political climate to recite a feminist spell and join the “witchy renaissance.” On Wednesday, Vox published an article promoting “magic as self-care after Kavanaugh,” encouraging those upset at the U.S. Senate’s confirmation of the newest Supreme Court justice to turn to witchcraft as a feminist coping mechanism.