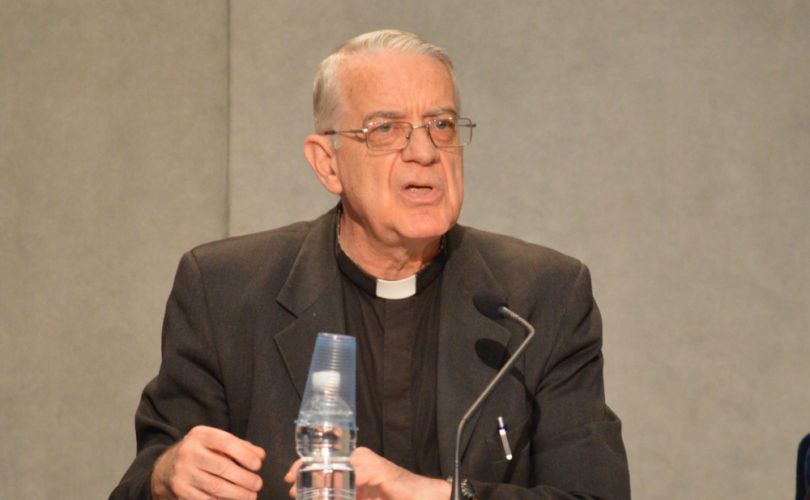 Father Federico Lombardi, director of the Holy See Press Office, speaks at a press briefing during the Vatican's Extraordinary Synod on the Family on October 11, 2014.Patrick Craine / LifeSiteNews.com

ROME – The Vatican has revised the English translation of some key words in the controversial section on homosexuality from Monday’s interim report from the Synod on the Family, in an apparent effort to quell concerns from English-speaking Synod fathers.

But reporters questioned the revision at today’s press conference, arguing that the original translation was more faithful to the official Italian version. Father Federico Lombardi, director of the Holy See Press Office, did not contest the reporters’ charge, but instead invited them to send in their critiques.

Even in the new translation, many of the controversial aspects of the paragraphs remain, including language asking whether the Church is capable of “accepting and valuing [homosexuals’] sexual orientation.”

However, the new English translation now speaks of “providing for” homosexuals rather than “welcoming” them, the latter of which is a more literal translation of “accogliere,” the word in the relatio’s official Italian version.

In his response to reporters’ challenges, Father Lombardi stressed that the official version is the Italian. He said some had pointed out errors in the original English translation so the General Secretariat, which is running the Synod, made revisions and the press office published them.

He said people should not worry too much about the translation because the interim relatio is only a working document; the final report on Saturday is what matters.

There could very well be a “third version” of the interim relatio’s translation, he said.

“Some mistakes are made,” he added. “Thank you for letting me know.”

Speaking of “providing for” homosexuals could suggest a need for pastoral care, in the sense of potentially helping the person overcome sin, which is not implied in the word “welcoming.”

The two reporters who raised the issue today emphasized the importance of the distinction. The Associated Press’s Nicole Winfield said that one “provides for” a stray dog by throwing it some food, whereas “welcoming” it means it's allowed in the door.

50.        Homosexuals have gifts and qualities to offer to the Christian community. Are we capable of providing for these people, guaranteeing […] them […] a place of fellowship in our communities? Oftentimes, they want to encounter a Church which offers them a welcoming home. Are our communities capable of this, accepting and valuing their sexual orientation, without compromising Catholic doctrine on the family and matrimony?

51.        The question of homosexuality requires serious reflection on how to devise realistic approaches to affective growth, human development and maturation in the Gospel,  while integrating the sexual aspect, all of which constitute an important educative challenge. Moreover, the Church affirms that unions between people of the same sex cannot be considered on the same level as marriage between man and woman. Nor is it acceptable that the pastor’s outlook be pressured or that international bodies make financial aid dependent on the introduction of regulations based on gender ideology.

52.        Without denying the moral problems associated with homosexual unions, there are instances where mutual assistance to the point of sacrifice is a valuable support in the life of these persons. Furthermore, the Church pays special attention to […] children who live with same-sex couples and stresses that the needs and rights of the little ones must always be given priority.

50.        Homosexuals have gifts and qualities to offer to the Christian community: are we capable of welcoming these people, guaranteeing to them a fraternal space in our communities? Often they wish to encounter a Church that offers them a welcoming home. Are our communities capable of providing that, accepting and valuing their sexual orientation, without compromising Catholic doctrine on the family and matrimony?

51.        The question of homosexuality leads to a serious reflection on how to elaborate realistic paths of affective growth and human and evangelical maturity integrating the sexual dimension: it appears therefore as an important educative challenge. The Church furthermore affirms that unions between people of the same sex cannot be considered on the same footing as matrimony between man and woman. Nor is it acceptable that pressure be brought to bear on pastors or that international bodies make financial aid dependent on the introduction of regulations inspired by gender ideology.

52.        Without denying the moral problems connected to homosexual unions it has to be noted that there are cases in which mutual aid to the point of sacrifice constitutes a precious support in the life of the partners. Furthermore, the Church pays special attention to the children who live with couples of the same sex, emphasizing that the needs and rights of the little ones must always be given priority.