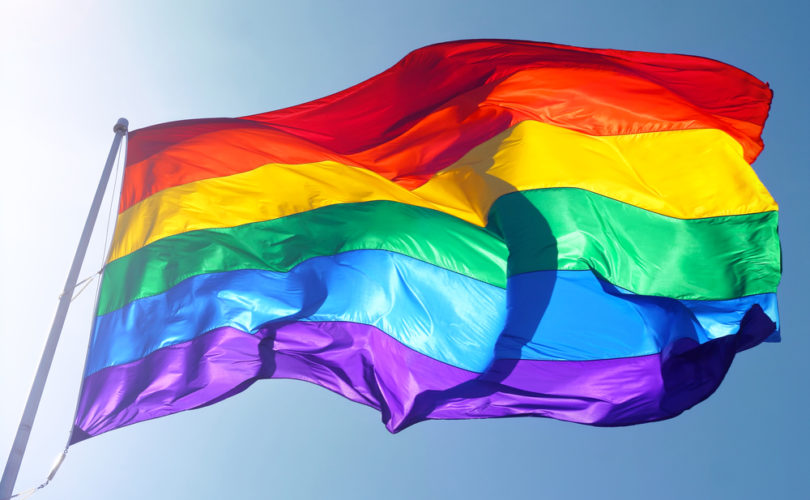 WASHINGTON, D.C., July 24, 2018 (LifeSiteNews) — Republicans in the U.S. House of Representatives are aiming to forbid U.S. embassies from raising “gay pride” flags, or any banner other than the Stars and Stripes.

Rep. Jeff Duncan, R-SC, is spearheading the effort in response to a handful of past instances in which American embassies around the world flew rainbow flags to promote homosexual “pride” or “rights,” the Washington Examiner reports.

Introduced last Thursday, the Old Glory Only Act does not single out LGBT flags; rather, it forbids the flying of any flag other than the American flag. As of Friday it has 26 cosponsors, all Republicans.

“The United States flag is the single greatest symbol of freedom the world has ever known, and there’s no reason for anything but Old Glory to be flying over our embassies and posts around the globe,” Duncan told the Examiner.

American embassies in Macedonia, Jamaica, Belize, Israel, and Iraqi Kurdistan are among the locations that have caused controversy in recent years for flying pro-LGBT flags, under both the Obama and Trump administrations. Many other embassies, such as in Prague, the Czech Republic, and even the Vatican, have promoted homosexual “pride” through a variety of other statements and gestures, as well.

While President Donald Trump has overwhelmingly pleased pro-lifers for consistently working against abortion and Planned Parenthood, his failure to crack down on Obama-era holdovers’ LGBT advocacy is part of a far more mixed record on LGBT issues.

Pro-family advocates have been heartened by most of the president’s judicial nominees, his attempts to bar gender-confused individuals from military service, his support for religious liberty, his refusal to recognize “pride month,” his deletion of special LGBT material from government websites, and selection of pro-family conservatives such as Mike Pence, Mike Pompeo, Roger Severino, and Howard Nielson, Jr for major posts.

Last month, the president nominated R. Clarke Cooper, an LGBT activist who has publicly attacked the Boy Scouts and National Organization for Marriage, to serve as Assistant Secretary of State for Political-Military Affairs. Trump has also praised the pro-gay Log Cabin Republicans, and declared the Supreme Court’s 2015 Obergfell v. Hodges ruling forcing all fifty states to recognize same-sex “marriage” to be “settled law.”