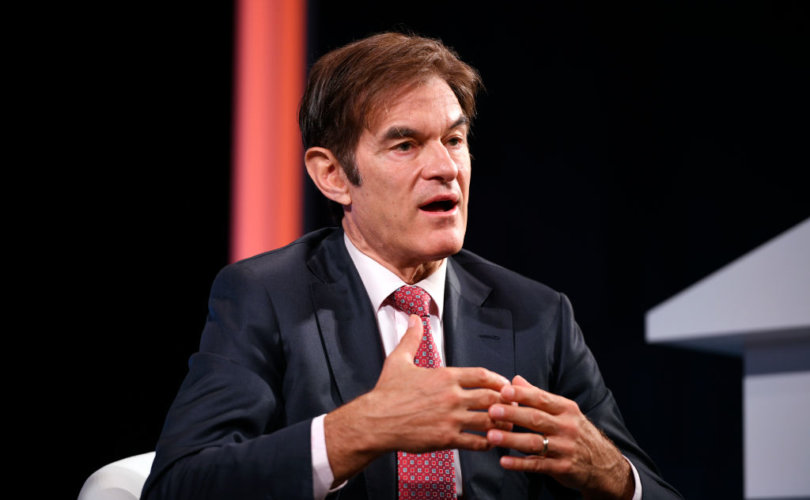 The celebrity doctor and host of The Dr. Oz Show made the comments on the New York City-based radio show The Breakfast Club, Jack Posobiec reported.

When asked what he thought about a heartbeat law recently passed in Alabama that banned abortion at six weeks, Oz responded, “I’m really worried about it.”

“The problem with law as it stands now,” he said, is that “most women don’t know they’re pregnant. It’s only two weeks past your last period when you have to decide by.”

“So you’re asking women to decide almost instantaneously if they’re pregnant or not,” Oz continued, “and it’s also banned in case of incest and rape.”

He predicted “a big sucking sound of businesses leaving there,” which never happened.

Oz also dismissed the scientific reality of fetal heartbeats, claiming that a baby’s heart six weeks into pregnancy is just “a cell” with “little electrical changes.”

“And the other thing is this whole thing about heart beating. I mean, they’re electrical changes at six weeks, but the heart’s not beating … If you were to say, starting [from] when we can hear the heart, like when the heart’s really doing something, that’d be different. That’s not six weeks, though.”

Actually, it’s even earlier. A baby’s heart begins beating and pumping blood through his or her vascular system to developing organs just three weeks after conception, according to the American Association of Pro-life Obstetricians and Gynecologists (AAPLOG). “By 21 days after conception, the heart starts beating and pumping blood; by 30 days, arms, legs, and brain begin to form; and by 35 days, mouth, nose, and ears begin to develop,” AAPLOG noted.

Oz nevertheless blasted pro-lifers for trying to stop abortions of babies with beating hearts early in pregnancy, saying, “If you can define life by a beating heart, then make it a beating heart, not little electrical changes in this, in a cell that’s not, that no one would hear, would think about as a heart.”

“Don’t make some surrogate version of it, when you know, cells are, you know, have the electrical path. That’s not what the average person thinks,” he later said. “The average person isn’t visiting a little acorn heart beating in there at six weeks.”

“I think people create some of these battles on purpose.”

When asked whether he would be willing to perform an abortion himself in Alabama despite pro-life restrictions, Dr. Oz said, “I think your primary responsibility is to your patient.”

During his rambling seven-minute attack on pro-life laws, Oz added that he had “a big time concern” that Alabama’s heartbeat bill would impede “safe abortions,” citing the mythic phenomenon of “coat hanger” abortions.

“I went to medical school in Philadelphia and I saw women who’d had coat hanger events,” he said. “I mean they’re really traumatic events [that] had happened when they were younger, before Roe v. Wade, and many of them were harmed for life.”

Abortion supporters have long inflated the numbers of illegal abortion-related injuries and deaths prior to Roe, as Dr. Bernard Nathanson, co-founder of pro-abortion lobby group NARAL, notably admitted. “The number of women dying from illegal abortions was around 200–250 annually. The figure constantly fed to the media was 10,000,” he testified before his death.

Abortion, whether legal or illegal, poses significant health risks for women, including hemorrhage, infection, damage to the cervix, uterus, or other abdominal organs, thrombotic embolisms, and fatal cardiac events.

During the 2019 interview, Oz also gave an indication how he would vote as a senator, saying that he didn’t “want to interfere with everyone else’s stuff.”

Polling has shown that a majority or plurality of American voters support strict abortion limits at as early as six weeks.

But his effective endorsement of Roe v. Wade’s “viability line” hints that Oz, who would replace outgoing pro-life Republican Sen. Pat Toomey, would be one of a few GOP senators willing to join Democrats to codify Roe or advance other pro-abortion priorities, if given the opportunity.

In a stunning reversal soon after announcing his Senate bid last week, Oz claimed in an interview with a local news station in Pennsylvania that he is now “pro-life, with the three usual exceptions,” referring to rape, incest, and the “health of the mother.”

He added that he was “okay with the Supreme Court making the right decision” on an upcoming ruling expected to overturn Roe, without explicitly stating whether he agreed that the 1973 decision should be scrapped or not.

As LifeSiteNews previously reported, Oz is pro-LGBT and devoted a full episode of his show in 2010 to promoting “transgender kids,” including a 15-year-old girl who had a full mastectomy at age 14 and an 8-year-old boy being raised as a girl. A pediatrician who appeared on the episode, titled “Transgender Kids: Too Young to Decide?” advised parents to give their children hormone drugs and let them undergo transgender surgeries.

The same doctor later noted that his Dr. Oz appearance ultimately led to the creation of his “gender-identity clinic” in Chicago, the first of its kind in the Midwest, for kids as young as 4. Some of the clinic’s “patients” have undergone “sex change” surgery by age 15.

Among other things, Oz has backed gun control efforts, including red flag laws, theories of “systemic racism,” and liberal probation and parole “reforms,” has called for Wuhan-style total lockdowns, and has aggressively pushed the COVID-19 vaccine.

The World Economic Forum, the globalist group behind the Great Reset, named Oz a “Global Leader of Tomorrow” from 1999 to 2004.

If elected, Oz, a dual Turkish citizen who identifies with Sufi Islam, would be the first Muslim senator in U.S. history.