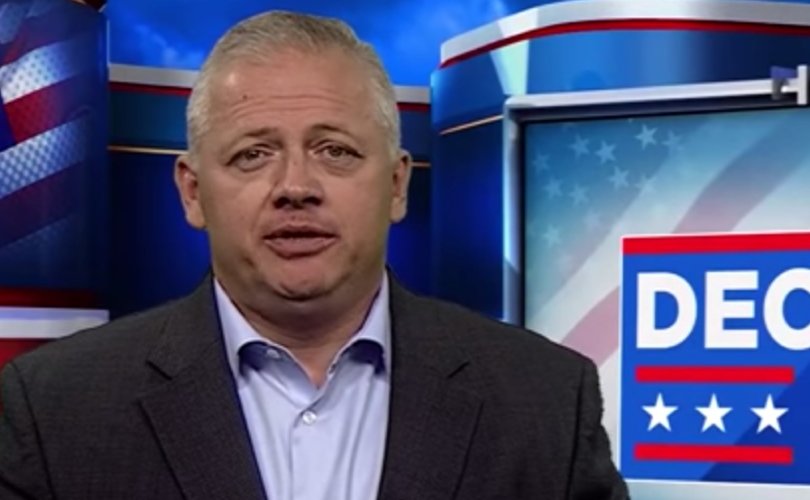 The men he “married,” Alex Pisciarino and Anthony LeCounte, describe themselves as “staunchly conservative” and believe that Riggleman shares their values. Both of them volunteered on Riggleman’s electoral campaign and attended several of his events in 2018. They met at a Log Cabin Republicans event.

Riggleman told the Washington Post, “My real belief is that government shouldn’t be involved in marriage at all, but if it is, everybody has to be treated equally before the law.” He added, “And that is part of our Republican creed. And it also comes down to love is love. I’m happy to join two people together who obviously love each other.”

Riggleman represents Virginia’s 5th Congressional District, which is near Charlottesville. Upon winning the 2018 GOP primary, Riggleman told reporters at a victory rally, “There’s three things I believe in. It’s free markets. It’s free agency. And it’s the freedom to keep your own money.”

Riggleman has been noted as a Republican who leans libertarian. He and his wife own a craft distillery. He has joined other distillers to push for deregulation in Virginia. A big contributor to his 2018 campaign was the Club for Growth, which kicked in $104,834 during the electoral cycle. The group has been opposed to President Donald Trump’s nationalist trade policies. The Club for Growth also opposed Trump’s presidential candidacy.

Riggleman’s campaign committee also received a donation from Koch Industries, a powerful business owned by brothers Charles and David Koch, both of whom favor libertarian causes. David Koch, while he has not been supportive of Democrats, is pro-abortion and has favored same-sex “marriage.”

The Washington Post pointed out Riggleman voted against the Equality Act, which would amend the Civil Rights Act of 1964 to make “sexual orientation” and “gender identity” protected classes like race and biological sex.

Pisciarino once worked for Club for Growth. The Virginia GOP has not commented on Riggleman’s involvement in the ceremony.