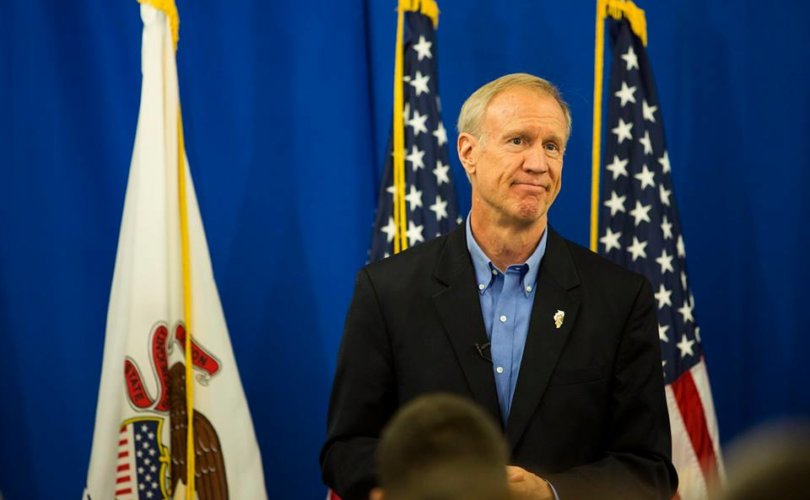 Rauner, a Republican, held veto power over the legislation — which Democrats pushed through on a strictly partly line vote and put on his desk May 31 — but he went against the grain of his own party in approving the legislation.

“We are extremely disappointed in Gov. Rauner for siding with pro-abortion Democrats by signing SB 1564 and expanding abortions in Illinois,” Emily Zender, executive director of Illinois Right to Life, said in a press release. “This radical bill is a direct assault on the consciences of medical professionals and the missions of community supported pregnancy help centers.

“Science tells us that abortion ends the life of a preborn child, and for Illinoisans to be forced to participate in any way in abortion is a tremendous injustice.”

Effective Jan. 1, 2017, the law requires medical professionals in all capacities to go against deeply held religious conscience by referring patients for abortions and counseling patients on what the legislation calls the “benefits” of abortion.

Zender’s organization, many others within the state, and national groups such as Alliance Defending Freedom (ADF), Americans United for Life, Thomas More Society, Heartbeat International and more have voiced their disapproval of the law.

Illinois Right to Life delivered over 6,000 signatures to the Governor’s desk opposing the bill, while ADF and Thomas More Society are expected to be among the first challenging the bill as unconstitutional in the courts.

“This is sad and tragic news,” Ann Scheidler, vice president of the Illinois-based Pro-Life Action League, said in a press release. “The medical professionals in the state of Illinois deserve to practice their healing art within the freedom of conscience. The pro-life pregnancy centers should be protected from giving exactly the advice that goes against everything they stand for. They will not do it.”

In early June, a nurse who had been forced to resign from her position with the Winnebago County Health Department rather than participate in an abortion sued her former employer based on the protections of the act.

Under the newly introduced change to the Health Care Right of Conscience Act, the nurse, Sandra Mendoza, would have no legal recourse, but instead would be exposed to further loss because of her pro-life stance.

California currently is defending a new state law in the 9th U.S. Circuit Court of Appeals, the so-called “Reproductive FACT Act,” which forces pregnancy medical clinics to advertise where and how a client can receive a state-funded abortion through Medi-Cal.

Last week saw the City of Los Angeles begin to enforce the law, even while it is currently under review in the court system.

“Women desperately need emotional support and practical resources during an unexpected pregnancy,” Jor-El Godsey, president of Heartbeat International — the world’s largest network of pregnancy centers and medical clinics — said. “This legislation accomplishes none of these goals and only serves to rob women in Illinois of the life-affirming choices they so desperately need during this difficult time.”

Illinois Right to Life has launched an informational page for pro-life medical professionals in Illinois here.