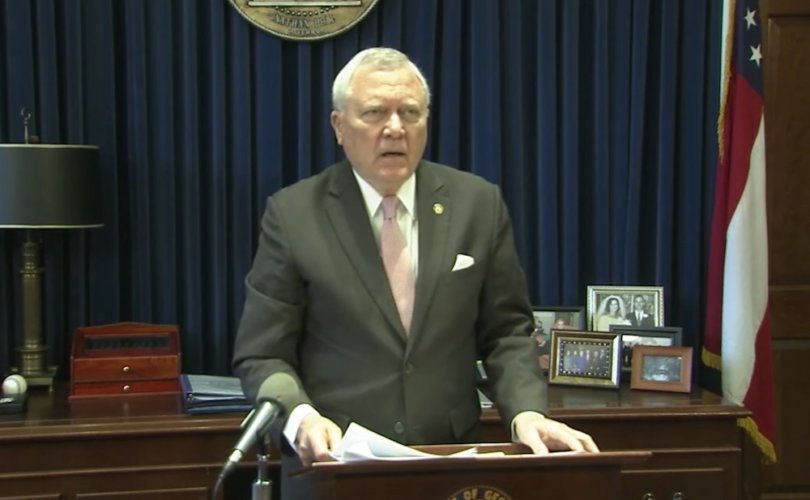 Gov. Nathan Deal announces his veto at a press conference on March 28, 2016.

ATLANTA, Georgia, March 29, 2016 (LifeSiteNews) – Facing a nationwide boycott that threatened the economic well-being of his state, the governor of Georgia announced Monday that he would veto a bill to enshrine First Amendment protections for pastors and religious organizations with a traditional view of marriage.

The Free Exercise Protection Act (H.B. 757) would have specified that clergy do not have to perform same-sex “marriages,” and that religious organizations do not have to rent out their facilities for such a ceremony, nor do they have to hire anyone if doing so would violate the group's sincerely held religious beliefs about human sexuality.

The bill also forbade the state from requiring businesses to remain open on Saturday or Sunday if doing so would prevent attendance at religious services.

Gov. Deal, a Republican, said Monday that he favored the early version of the bill. But the NFL threatened to pull the Super Bowl out of the state if it passed. A coalition of Hollywood studios including Disney and Marvel Studios, as well as 400 businesses ranging from Apple to Delta to Coca-Cola, made similar threats to cut all business ties in the Peach State. The film industry alone generated $1.7 million in 2015, according to the state.

By early this month, Gov. Deal invoked the New Testament to condemn the bill.

“If Gov. Deal were honest, he would say that the pressure coming from the corporate elite was overwhelming and that it threatened to cause economic ruin to his state,” said Bill Donohue. “Even men and women of faith could understand why he would veto the bill.”

Instead, the two-term Republican cast himself as a steadfast leader who refused to be cowed by the state's religious lobby.

“I do not respond well to insults or threats,” he said at a 10-minute-long press conference yesterday announcing his decision.

“That is a lie – he responds very well to threats,” Donohue said. “It is precisely the kinds of threats issued by the NFL, Disney, and Marvel Studios that made him cave.”

The governor implied that signing the bill would undermine “the character of our state,” “could give rise to state-sanctioned discrimination,” and may even lead to a widespread rebirth of racial and religious discrimination in the once-tranquil state.

“Georgia is a welcoming state filled with warm, friendly and loving people. Our cities and countryside are populated with people who worship God in a myriad of ways and in very diverse settings. Our people work side-by-side without regard to the color of our skin, or the religion we adhere to,” he said. “I intend to do my part to keep it that way.”

But constitutional watchdogs and clerical associations said the move put them in a “precarious position.”

Others said the real victim was the Constitution.

“Religious freedom is the principle on which this country was founded,” said Kelly Shackelford, the president and CEO of First Liberty institute, which is dedicated to the free expression of religion in the United States. “Through this veto, Governor Deal turned his back on our founding freedom. Regardless of our differences on certain issues, we should all agree that …the free exercise of religion is good for society, good for business, and good for the citizens of any state.”

“The devil has gone down to Georgia again, but this time it was in the form of Big Business and cowardly politicians,” he said. “Governor Deal’s veto of a watered down religious liberty bill, which would have barely afforded pastors and priests protections from the state over their beliefs over natural marriage, reveals how LGBT activists and their allies in big business are now not even willing to allow religious freedom within the four walls of a church.”

Polls show the measure had broad support among the people of Georgia. “Two-thirds of Georgians support it, and even a majority of Democrats responded that they wanted the governor to sign it,” said Jane Robbins, a senior fellow at American Principles Project.

However, all Democratic legislators and a few Republicans voted against the bill.

Some of the bill's sponsors spoke of holding a special session to override the governor's veto. But calling such a session requires three-fourths of legislators, and overriding the veto would take two-thirds. Both margins are likely unreachable.

The veto follows similar actions by Republican Governors Mike Pence of Indiana and Asa Hutchinson of Arkansas when faced with similar boycotts.

“No person or nonprofit should lose tax exempt status, face fines, lose a professional license or be punished by the government simply for believing what President Obama believed just a few years ago: that marriage is the union of a man and a woman,” Perkins said. “State coercion of faith-based organizations and their millions of adherents for the sake of a radical ideological agenda – all in the name of ‘freedom’ – is an affront, not just to Georgians, but to all Americans.”