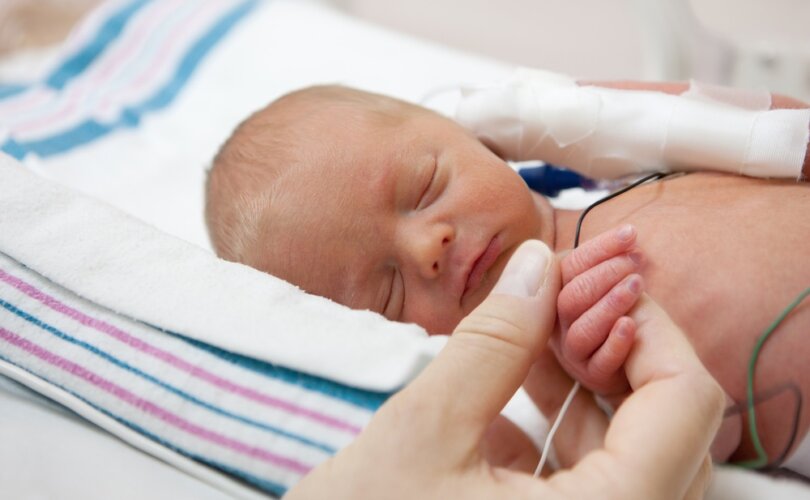 WASHINGTON, D.C. (LifeSiteNews) — In one of the first acts of the new Congress, the Republican-led U.S. House of Representatives tallied their votes Wednesday to pass two pro-life initiatives. One would secure legal protections for babies born alive after botched abortions and the other would articulate the House’s condemnation of attacks on pregnancy centers.

While the votes signal strong pro-life sentiment among the Republican majority in the House, the measures are unlikely to progress in the Democrat-controlled Senate.

The House voted 220-210 on Wednesday to pass H.R. 26, also known as the “Born-Alive Abortion Survivors Protection Act,” which had been introduced in the House on January 9. It would amend Title 18 of the United States Code in order “to prohibit a health care practitioner from failing to exercise the proper degree of care in the case of a child who survives an abortion or attempted abortion.”

I was honored to preside over the House today as we PASSED The Born Alive Abortion Survivors Protection Act AND the sense of Congress condemning the recent attacks on pro-life facilities, groups, and churches. Republicans will always stand to protect America’s pro-life values. pic.twitter.com/21Vsio2QwY

According to the legislation, if an abortion fails and “results in the live birth of an infant, the infant is a legal person for all purposes under the laws of the United States and entitled to all the protections of such laws.”

While federal law does provide protections for babies born after botched abortions, the measure would specifically require healthcare practitioners to treat such babies like “any newborn, or for any person who comes to a hospital, clinic, or other facility for screening and treatment or otherwise becomes a patient within its care.”

The House’s vote to pass the measure came despite vehement opposition from pro-abortion Democrats.

Democrat House Minority Leader Hakeem Jeffries, who replaced Nancy Pelosi after she stepped down from the role last year, complained the bill to protect babies born alive after failed abortions was part of “a march towards criminalizing abortion care, a nationwide ban.”

In a press release shared with LifeSiteNews ahead of the vote, Susan B. Anthony Pro-Life America (SBA) president Marjorie Dannenfelser affirmed that “Our government’s most sacred duty is to safeguard the lives of all Americans.”

“We thank GOP leadership for recognizing the federal government’s crucial role in protecting our most vulnerable children and their mothers in the Dobbs era,” Dannenfelser said, referring to the landmark June 2022 Supreme Court ruling in Dobbs v. Jackson Women’s Health Organization, in which the Court overturned Roe v. Wade and thereby eliminated the federal “right to abortion.”

MAP: Most abortions are banned in 13 states, more states to follow

Dannenfelser compared Republicans’ out-of-the-gate actions to advance a pro-life agenda to the priorities of Democrats, who she described as “pushing abortion on demand until birth and even infanticide, paid for by the taxpayer.”

She highlighted the fact that Democrats in the House immediately pushed for a vote on the Women’s Health Protection Act, which she said “would mandate abortion on demand throughout pregnancy in all 50 states.” Dannenfelser noted that the “extreme legislation” failed time and again to gain traction last year in the Senate.

During floor speeches Wednesday, Democrats repeatedly played into the hands of their opponents by defending late-term abortion and conflating miscarriage treatment with abortion.

In one instance, Rep. Frederica Wilson made her pitch for abortion by suggesting that Republicans want to prevent women from getting proper care in the event of miscarriages. During her speech, she showed a chart that depicted a fully formed unborn infant in his mother’s womb.

This floor chart as a backdrop for a floor speech promoting abortion … is certainly a choice. pic.twitter.com/3xIhqhpv1M

Rep. Sheila Jackson also explicitly defended partial-birth abortion (which is already illegal in the U.S.), something she framed as a “medical choice.”

The Daily Signal’s Mary Margaret-Olohan pointed out that partial-birth abortion, according to the Partial Birth Abortion Act of 2003, is a procedure in which an abortionist “‘deliberately and intentionally vaginally delivers a living fetus until … the entire fetal head is outside the mother’s body’ before snipping the baby’s neck.”

While Americans remain divided on the issue of abortion, a May 2022 NPR/PBS NewsHour/Marist poll found that although about two-thirds of respondents said they opposed the overturning of Roe v. Wade, about 68% of U.S. adults, including 52% of Democrats, favored at least some restrictions on abortion.

Unlike the Democrats, Dannenfelser said Republican lawmakers “are aligned with the majority of Americans who reject pro-abortion extremism.”

Dannenfelser said HR 26, along with additional pro-life resolution (H. Res 1233), “would affirm the sanctity of human life – born and unborn – by supporting our heroes serving women, children, and families in communities nationwide and ensuring that any baby who survives an abortion receives the same standard of care as any newborn of the same gestational age.”

The other initiative referenced by Dannenfelser addresses the recent fire bombings, vandalism, and violent threats lodged against pro-life pregnancy centers and places of worship.

The lower chamber on Wednesday voted to pass H. Res. 1233, which expresses “the sense of the House of Representatives condemning the recent attacks on pro-life facilities, groups, and churches.”

The resolution provides a long list of attacks on pro-life establishments and churches recorded since May 2022, and ends with a condemnation of the assaults, a recognition of the sanctity of life, and a call to action for the Biden administration to “uphold public safety and to protect the rights of pro-life facilities, groups, and churches.”

The Biden administration has faced consistent pressure from pro-life groups to appropriately investigate the attacks and threats against pregnancy centers and churches.

While the Biden DOJ has aggressively prosecuted pro-life activists, even sending armed agents to arrest them at their homes in front of their children, it has been far less assertive in pursuing investigations against those who have attacked and threatened pro-lifers.

The inaction on the part of federal law enforcement has led some pro-lifers to hire their own detectives to investigate the attacks, LifeSiteNews reported.