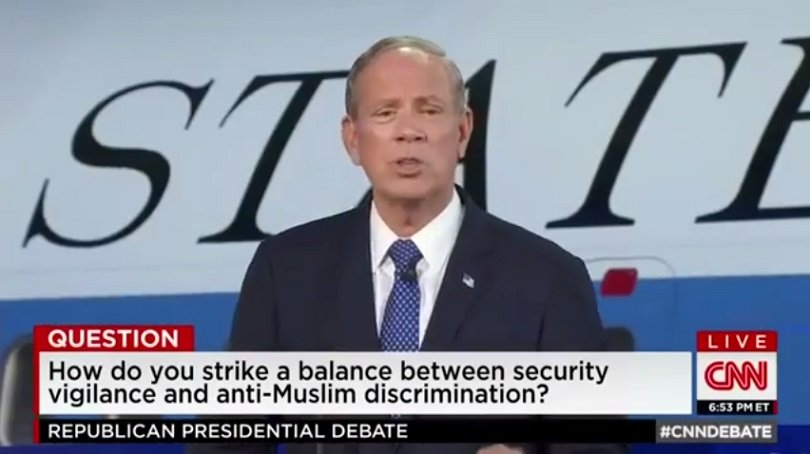 SIMI VALLEY, CA, September 17, 2015 (LifeSiteNews) – While most of the the Republican presidential candidates defended Kim Davis' right to uphold her religious beliefs, one candidate likened her to officials in the Iranian government and said he'd put the Rowan County clerk in the unemployment line.

Former New York Gov. George Pataki had a heated exchange with former Sen. Rick Santorum, in which he said Kim Davis deserved to be fired – and if she worked in the Empire State during his three terms in office, he would have pulled the trigger himself.

“Yes, Kim Davis is different from Islamist radicalists from the Middle East,” he said. “But on the other hand, we have a rule in America” that elected officials must uphold “the rule of law.”

“I think she should have been fired, and if she worked for me, I would have fired her,” Pataki said. “There’s a place where religion supersedes the rule of law. It’s called Iran,” he added. “It shouldn’t be the United States.”

Santorum, an outspoken advocate of religious liberty, replied that Davis deserved an accommodation, and people of conscience should not be jailed for their views of marriage.

“We need a president who’s going to fight a court that is abusive, that has superseded their authority,” he said. “Judicial supremacy is not in the Constitution, and we need a president and a Congress to stand up to a court when it exceeds its constitutional authority.”

Moderator Jake Tapper allowed the exchange to carry on for a while. It took place during CNN's “undercard” debate of four lower-ranking presidential candidates – Pataki, Santorum, Lindsey Graham, and Bobby Jindal.

Pataki – who describes himself as “pro-choice” – responded, “My response is, kind of, 'Wow.' You know, we’re going to have a president who defies the Supreme Court because they don’t agree?”

“I hope so. If they’re wrong,” Santorum replied.

According to multiple presidential polls, Pataki is the lowest rated of all Republican presidential hopefuls, registering at zero percent.