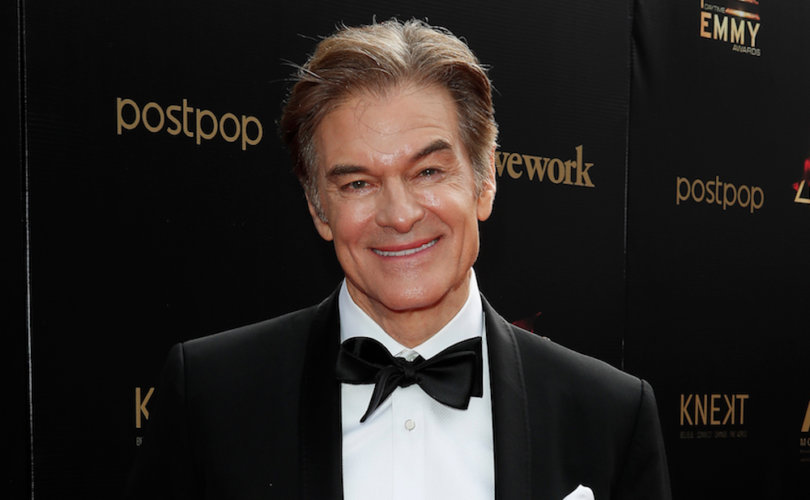 (LifeSiteNews) – Pro-LGBT talk show host Dr. Mehmet Oz announced his candidacy for a hotly-contested Senate seat in Pennsylvania next year, running as a Republican despite a history of transgender activism and support for other liberal causes.

The celebrity doctor and host of The Dr. Oz Show made the announcement Tuesday and has been quickly embraced by several high-profile Republicans, including Sens. Lindsey Graham of South Carolina and Kevin Cramer of North Dakota. Top GOP strategists have already joined his campaign, which appears to be gaining traction with President Donald Trump, as well.

But while Oz and his supporters have tried to claim that he’s a “conservative Republican,” his record says otherwise.

A decade ago, Oz emerged as a critical, early backer of the transgender movement, running a special about “transgender children” during his show’s first season on the air in 2010. The hour-long program promoted a fifteen-year-old girl who had undergone a double mastectomy at age fourteen and an eight-year-old boy being raised as a girl named “Josie.”

Garofalo later described his Dr. Oz appearance as a breakthrough for his career that led him to shift his focus specifically to experimental transgender drugs and surgeries for children.

“Following the episode, families with gender nonconforming children as young as 4 or 5 years of age suddenly began to use the Internet to contact me” from “as far away as Arkansas and Kansas,” he wrote in 2016. “This experience combined with the mentorship and encouragement of colleagues and friends such as Johanna Olson, MD, and Stephen Rosenthal, MD, led to a change (some might say addition to) in my career path to think more broadly about the transgender health and specifically to the inclusion of children and families.”

To that end, Garofalo launched a “gender-identity clinic” in 2013 that has been “pushing the boundaries” of transgender procedures, according to an article in Chicago Magazine.

The article noted that Garofalo “immediately” prescribed hormone blockers to a twelve-year-old boy who decided he was “transgender” after watching an episode of Oprah, where Oz had begun his TV career as a regular medical guest. Some of Garofalo’s “patients” have been as young as four, and some have had mutilating, irreversible transgender surgeries by the age of fifteen.

And it was all thanks to Dr. Oz, whose program “changed the course of [Garofalo’s] career,” Chicago Magazine said. Garofalo convinced Lurie Children’s Hospital of Chicago to open his clinic – the first in the Midwest – soon after the episode.

Oz’s “transgender kids” special also drew the attention of GLAAD, which praised it for “rais[ing] the bar for transgender talk show coverage.” GLAAD was present at the live taping and later nominated the episode for an award, as it had for a Dr. Oz episode the previous year titled, “The Science of Intersex.”

He later interviewed a “transgender” plastic surgeon about “sex change” surgeries and, in 2015, a “woman who spent most of her life trapped in a man’s body.” At the insistence of GLAAD and other LGBT groups, he publicly denounced reparative therapy for homosexuality in 2012.

“Sex changes” and “transgender families” are far from Dr. Oz’s only radical, left-wing interests. In a more recent show on red flag laws, he appeared to back legislation that would allow courts to strip people of legally-owned firearms based on their “social media postings.”

WATCH: Dr Oz says we should have Red Flag Laws that take people’s guns away by surveilling their social media posts
pic.twitter.com/S9uWSeu6ko

Dr Oz is a full-throated supporter of CRT https://t.co/aPCDB94joA

And though he has largely framed his Senate bid around fighting lockdowns and COVID mandates, Dr. Oz once accosted fellow talk show host Wendy Williams for choosing not to get an experimental coronavirus jab.

Oz rose to fame in the 1990s as a cardiac surgeon who peddled medically baseless “alternative therapies,” like Reiki, a superstitious Japanese practice that claims to channel “healing energy.” Reiki, which Dr. Oz has incorporated into open-heart surgeries, has been condemned by the U.S. Catholic Church as “not compatible with either Christian teaching or scientific evidence.”

Oz has also endorsed mediums and lent credence to Brazilian occultist and spiritist João Teixeira de Faria (João de Deus/John of God) who “incorporates spirits into his body to perform spiritual and physical healings,” according to his website. Faria was sentenced to 63 years in prison between 2019 and 2020 for raping numerous women and has faced hundreds of abuse allegations.

A Muslim, Oz has said that he identifies with a form of Islamic mysticism known as Sufism. His wife, Lisa, is a Reiki master and an adherent of the Protestant cult Swedenborgianism.

“He’s got an incredible background and personal story,” said Sen. Lindsey Graham. “It’s good news for the Republican Party, and I think he’d be very competitive.”

“It’s great to have someone who certainly is a game-changer the very first moment,” Sen. Cramer concurred. “Who doesn’t love a guy that’s got 100 percent name ID and a whole bunch of money?”

Oz is “obviously intelligent,” Louisiana’s Sen. John Kennedy said, adding that he “seems to have a clean grasp of the issues.”

Former executive director of the National Republican Senatorial Committee, Chris Hansen, and Erin Perrine, a Trump campaign spokesperson, have already jumped onto Dr. Oz’s campaign, according to Politico. Oz has also enlisted the national finance director of both Sens. John Cornyn of Texas and Tim Scott of South Carolina.

Even President Trump has apparently warmed to his candidacy, according to a Politico report that said Trump believes Oz’s name recognition would be an asset in the race. Trump previously endorsed U.S. Army veteran Sean Parnell, who dropped out last month amid a custody battle. He appointed Dr. Oz to the President’s Council on Sports, Fitness, and Nutrition in 2018.

Oz is now the current GOP frontrunner to replace outgoing Republican Sen. Pat Toomey, who announced his retirement just around a month before Oz, a long-time New Jersey resident, began renting his in-laws’ house in Pennsylvania.