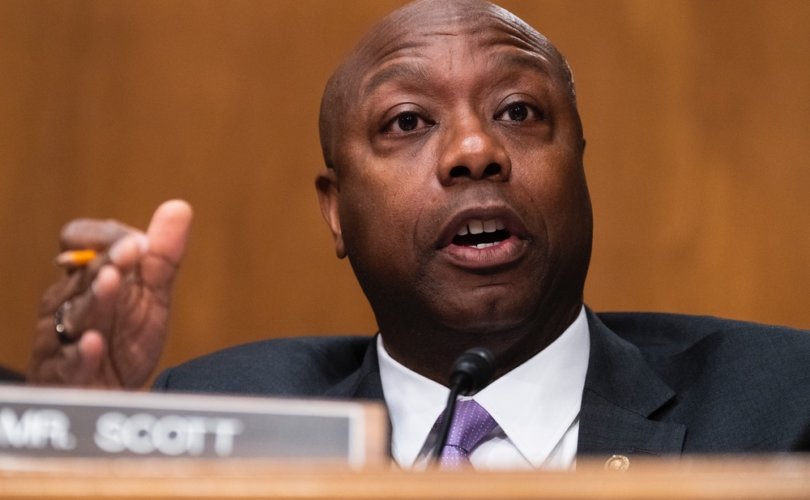 WASHINGTON, D.C. (LifeSiteNews) – A bill introduced in the U.S. Senate on Tuesday by South Carolina Republican Senator Tim Scott would prohibit federally funded elementary and middle schools from changing the pronouns or names of students or allowing them to use bathrooms and locker rooms of students of the opposite sex without parental permission. Violations of the bill’s provisions at any federally funded elementary or middle school would result in the loss of federal funding.

“Parents across the country have grown rightfully concerned by school policies that push a radical agenda that’s kept secret from parents,” Scott told Fox News in a statement.

“It shouldn’t be controversial to say that parents should have the biggest voices in their kids’ education, yet powerful unions and bureaucrats continue to keep parents in the dark about curriculum and administrative policies. It’s unacceptable. My common sense bill sends a clear message that parental rights must be a top priority for student safety and success.”

Scott argues in the bill that parental rights are constitutionally protected rights under the Fourteenth Amendment. “Public schools across the country are violating these fundamental parental and familial rights by deliberately hiding information about gender transitioning children from their parents,” the bill states.

The bill cites three examples of what would be considered a violation of these rights. In October 2020, parents sued Montgomery County Public Schools in Maryland over the district’s gender support plans. According to the parents, the plans went beyond what was demanded by Maryland’s guidelines by demanding secrecy. A judge threw out the case last month, citing fears of abuse, the Washington Times reported. The parents are considering an appeal. The bill also sites a similar incident that occurred in Iowa, where a school district was also sued over its pronoun guidelines.

The bill also mentions a mandatory training session by Fairfax County Public Schools in Virginia which instructed teachers to use the preferred pronouns and names of gender-confused students while in class and while dealing with student records, and allow students to use the locker rooms and bathrooms in conformity with their “identity,” all without the permission of the students’ parents.

By introducing the bill, Scott finds himself opposed to President Joe Biden’s attempt to redefine “sex” to include gender identity in Title IX, the federal law that forbids discrimination on the basis of sex.

If Biden is successful, teachers would have to use the preferred pronouns and names of gender-confused students, and schools would have to allow gender confused athletes to play on teams in conformity with their so-called “gender identity.” The proposed rules would also endanger freedom of speech and religion and would impose abortion mandates and force doctors to perform gender “reassignment” surgery and give puberty blockers and other transgender drugs to children.

The bill comes shortly after Virginia changed its public school model policies regarding gender-confused students to take into account parental rights. According to the new policies, released Friday, students must use their birth names and pronouns while in school and use bathrooms and locker rooms and participate in sports in conformity with their biological sex.

The new policies replace those put in place by the administration of Democrat Ralph Northam, which would have allowed students to use all accessible bathrooms and locker rooms, regardless of sex, and permitted students to “change genders” with nothing more than a verbal declaration of their “gender identity,” and instructed teachers to help students hide their “identity” from parents.