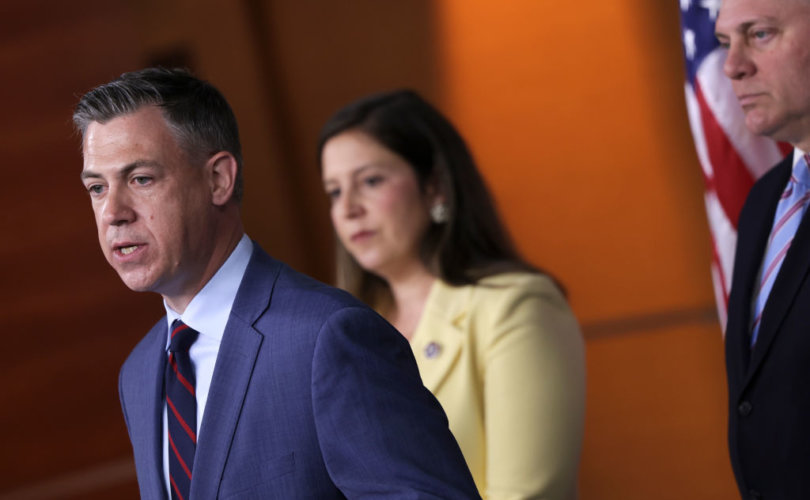 WASHINGTON, D.C. (LifeSiteNews) — Republicans in the U.S. House of Representatives have introduced a bill permitting adults to file lawsuits against doctors who performed “sex-change” procedures on them while they were under the age of 18.

Republican legislators introduced the “Protecting Minors from Medical Malpractice Act” Wednesday to combat the Biden administration’s push to promote drugs and surgeries for children who want to look more like the opposite sex, Breitbart reported.

The measure, written by Rep. Banks, is designed to “protect children from medical malpractice in the form of gender transition procedures.”

Children must be protected from radical doctors coercing them into dangerous, experimental, and sterilizing gender procedures. I am pleased to join with @RepJimBanks and @SenTomCotton in leading the effort to ensure victims can seek legal recourse. https://t.co/9EHkiAL0Jv

According to the language of the legislation, individuals who received a “gender-transition procedure from a medical practitioner” as a minor may bring suit against the doctor within 30 years after turning 18, if they have suffered “physical, psychological, emotional, or physiological harms” as a result of the surgical or pharmaceutical intervention.

Under the act, successful litigants may receive declaratory or injunctive relief, compensatory damages, punitive damage, and attorney’s fees and costs.

“Every time a doctor performs a gender-transitioning procedure on a minor, they endanger a vulnerable child, potentially sterilize them for life, and break their oath to ‘do no harm,’” LaMalfa said.

RELATED: ‘Detransitioner’ tells all in horrifying account of what ‘gender affirmation’ really means

“Our bill allows children who grow up to regret these procedures to sue for damages,” Sen. Cotton said in the statement. “Any doctor who performs these irresponsible procedures on kids should pay.”

In the same statement, Banks, who last year had his Twitter account suspended for accurately referring to top Biden administration health official Richard “Rachel” Levine as a man, argued that “If Democrats truly supported gender-confused children, they’d support our effort to give them legal recourse.”

“Today, to mark Pride Month, President Biden will sign an Executive Order Advancing Equality for LGBTQI+ Individuals, and he will welcome LGBTQI+ families, advocates, elected officials, and leaders to the White House for a reception,” the White House said in a June 15 announcement.

President Biden and his administration have consistently backed irreversible, life-altering pharmaceuticals and surgeries for gender-confused children and adults.

In April, then-White House Press Secretary Jen Psaki declared that drugging and performing “gender-affirmation” surgery on children is “best practice,” regardless of evidence to the contrary.

Jay Greene, Heritage Foundation senior research fellow with the Center for Education Policy, told The Daily Wire earlier this month that the “claim that puberty blockers and cross-sex hormones prevent suicides is being used by the Biden administration and state policymakers to ease access to those drugs.”

“As it turns out, the science behind that claim is extremely weak and when the evidence is examined properly, it shows that making cross-sex treatments more widely available risks raising youth suicide rates rather than reducing them,” Greene said, citing a report titled: “Puberty Blockers, Cross-Sex Hormones, and Youth Suicide.”