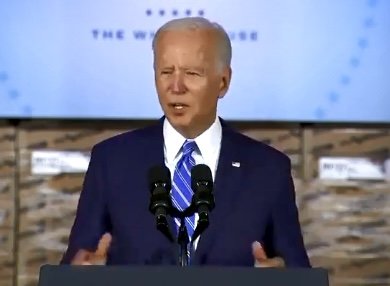 It is “unacceptable that your administration is using the threat of contractual measures as a coercion to single out American workers in a vital national industry,” House Transportation & Infrastructure Committee ranking member Rep. Sam Graves and aviation subcommittee senior member Rep. Garrett Graves (no relation) wrote in a letter to President Joe Biden, Reuters reported.

“We strongly urge you to rethink this ill-conceived mandate which will result in the termination of employees whose jobs were saved over the last 18 months at enormous taxpayer expense,” the lawmakers continued. “This unilateral mandate and arbitrary deadline [of December 8] will serve only to disrupt airline operations and increase the likelihood of canceled flights.”

Biden declared Thursday that he considers those job terminations an acceptable trade-off:

BIDEN: "When you see headlines and reports of mass firings, and hundreds of people losing their jobs, look at the bigger story…United went from 59% of their employees [vaccinated] to 99%…" pic.twitter.com/nOAKjLkfVM

On September 9, Biden announced that he was directing the U.S. Department of Labor’s (DOL’s) Occupational Safety and Health Administration (OSHA) to draft a rule that will, according to the White House, “require all employers with 100 or more employees to ensure their workforce is fully vaccinated or require any workers who remain unvaccinated to produce a negative test result on at least a weekly basis before coming to work.”

Biden also announced new vaccination rules for federal employees and government contractors, but the bulk of the controversy focused on the administration’s intrusion into the decisions of private-sector employers and employees, which is expected to affect more than 80 million Americans.

A month after that announcement, OSHA still has yet to give employers a specific, finalized guidance on the mandate, but the Republican lawmakers were reacting to news that White House COVID-19 coordinator Jeff Zients called the CEOs of American Airlines, Delta Air Lines, and Southwest Airlines to urge them to impose vaccination mandates on the grounds that “vaccination requirements work. New data reinforces that fact each day.”

After that call, Southwest and American announced that they will comply by the deadline for federal contractors, while Delta says it has not yet decided. United Airlines previously imposed its own mandate with a deadline of October 2; that deadline has since been delayed pending lawsuits by pilots and other employees.

Since taking office, Biden has attempted to rhetorically pressure and legally coerce COVID vaccinations instead of answering concerns about their safety and effectiveness, which stem from the fact that they were developed and released far faster than any previous vaccine.

May reporting from NBC News quotes several mainstream experts acknowledging “gaps” in federal vaccine monitoring, and a Project Veritas investigation released in September shows insiders at a federal medical facility speaking candidly about serious medical complications they’ve seen after COVID vaccination that are not being reported.

Nevertheless, on Thursday Biden reiterated the false claim that the COVID-vaccinated “cannot spread it to you,” despite his own CDC director, Rochelle Walensky, admitting two months earlier that “what [the vaccines] can’t do anymore is prevent transmission.”