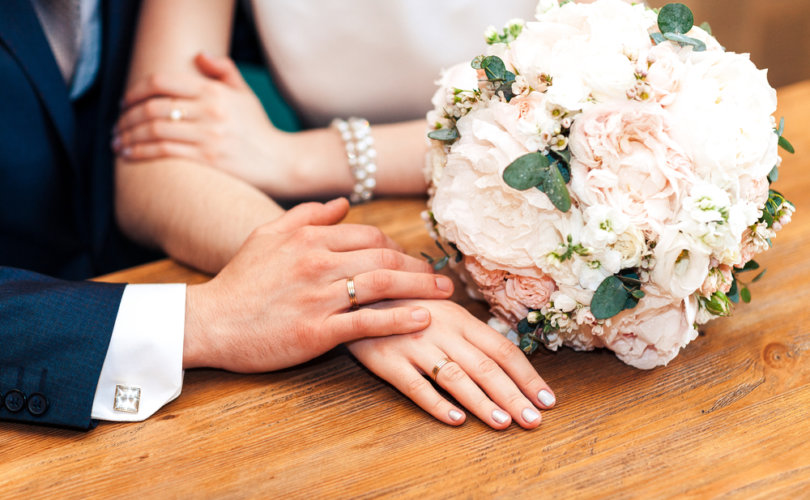 Writing in The Federalist, Glenn T. Stanton of Focus on the Family reviewed the current literature indicating that marriage has replaced employment and education as the central factor in the financial well-being of families. His findings are startling.

The marriage rate is “sinking” among lower and middle-class American adults; it’s now down to 48%. It has, however, remained stable among the wealthy.  And it’s “the proliferation of single-parent households” that “accounts for virtually all of the increase in child poverty since the early 1970s,” as Stanton quotes Jonathan Rauch.

In the early 1990s, sociologist Bill Galston said that to stay out, or climb out, of poverty, Americans needed to do only three things: graduate from high school, marry before having a child, and have that first child after the age of 20. Only 8% of Americans who follow these rules will be poor, Galston claimed, whereas 79% who fail in all three respects will certainly live in poverty.

This “success sequence”–high school, marriage, and only then baby carriage–still holds true today, and “working-class” women are three times more likely to have babies out of wedlock than wealthy women. Poor women are five times more likely than wealth women to have babies outside marriage. Both poor and working class women are twice as likely to be cohabiting than their richer sisters.

“Marriage is an essential active ingredient in improving one’s overall life prospects, regardless of class race, or educational status,” Stanton observed. Astonishing as it may seem, the poverty rate for children living with two unmarried, cohabiting parents is similar to that of single-mother led households. Even so-called “shotgun” marriages, contracted when the bride was pregnant, help keep women and children out of poverty.

But doubters have asked if this is putting the cart before the horse. Does marriage really generate wealth, or does wealth generate marriage?

“That’s the criticism some scholars have had–the liberal scholars,” Stanton told LifeSiteNews. “But marriage itself is a wealth creating institution. That’s what the research is finding.”

Marriage creates wealth because marriage encourages men to become better, more committed workers, providers and savers. Married men are less likely to fall into substance abuse, they are less likely either to commit or fall victim to crime, they have better health and they’re even less accident-prone. “A married man is a far different kind of man than the single or cohabiting man,” Stanton told Lifesitenews.

He said that one of the factors helping married people do better financially than cohabiting or single people is that they manage their money in a better way. For example, the cohabiting man is less likely than the married man to hand over his pay to the woman he lives with, for banking and settling household expenses. The cohabiting man is very aware that the woman he lives with is not his wife and is reluctant to allow this non-wife to manage his money. “It’s curious that cohabiting women are more likely to have to work but are more likely to live in poverty,” said Stanton.

Meanwhile, the married man is more likely to be given a job than the cohabiting or single man because employers know that married men tend to be more stable workers.

“When you’re married, your wife reminds you that you have to stick with your unfulfilling job until you have a new one,” said Stanton. “Married men settle down; unmarried men don’t settled down. This is shown time and time again in the [research] literature.”

Stanton argued against the idea that young men no longer want to marry, fearing marriage leads straight to divorce and financial ruin. “Most young men do want to get married,” he told LifeSiteNews. “If they could wave a magic wand to make it happen, they would.”

The problem is that marriage intimidates contemporary young men–and in today’s world, where more women than men graduate from college,“there’s not a lot going for them.” Stanton thinks that contemporary young men are intimidated by “strong, capable women.” Meanwhile, he said, young women are just as afraid of divorce. Stanton says that the thought “I don’t want to fail at marriage like my parents did” is what leads young adults to cohabit rather than marry.

Stanton thinks women are compromising on the quality of men they marry or live with. However, there is reason to believe the married men will improve. “The irony,” Stanton told LifeSiteNews, “is that with so many [successful, married] men, it was their marriage that made them what they became.” A man who isn’t married by his late twenties hasn’t been developed by marriage and family.