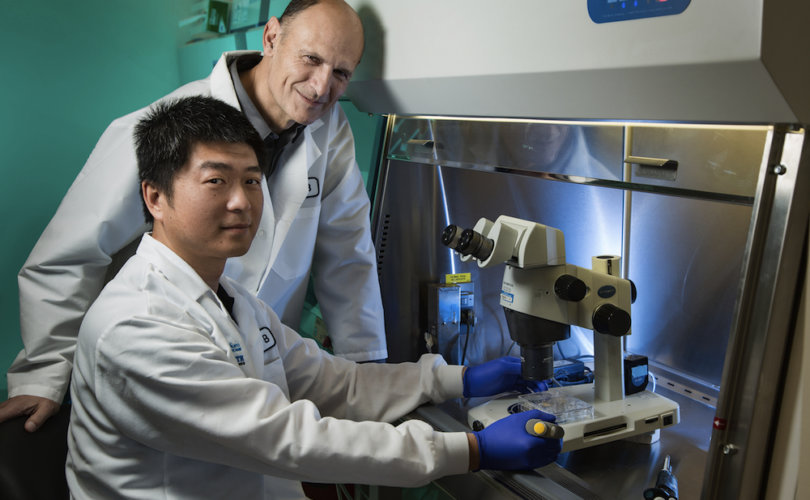 LA JOLLA, California, January 30, 2017 (LifeSiteNews) – Researchers at the Salk Institute have successfully grown human tissue inside a pig embryo, but ethicists are keeping close watch on the four-year project out of concern that half-human beings or human-animal hybrids could result.

Catholic ethicists in Canada and the U.S. told LifeSiteNews that the research, reported in the latest issue of Cell, appeared not to have strayed beyond lines drawn by the Church for “Xenotransplantation,” as interspecies transplants are called. These guidelines are designed to preserve human identity and preclude the use of aborted embryos.

But human stem cells that were crucial to the experiments were donated by adults, then regressed by the team from the Salk Institute for Biological Studies to an earlier stage resembling embryonic stem cells before being planted in pig embryos.

“They say they used ‘pluripotential stem cells,'” Moira McQueen, the director of the Canadian Catholic Bioethics Institute in Toronto, told LifeSiteNews. “That should mean adult stem cells. So as long as the stem cells aren’t embryonic stem cells … and you’re not duplicating the brain and as long as it has nothing to do with the genitals, you’re not doing anything morally wrong.”

“The neuro-cells and the gonadal cells are seen as special areas unique to human identity,” Furton said, adding that no mixture of human and animal cells should take place in these areas.

The Salk team took stem cells from 40 people and implanted them in pig embryos, which were then replaced in sows’ wombs. A few survived and fewer still grew small amounts human tissue. This was enough, however, to open up the possibility that pigs or other animals can be produced with human organs for transplanting into the same human who originally donated the stem cells, thus reducing the risk of organ rejection.

“We underestimated the effort involved,” the lead researcher, Professor Juan Carlos Izpisua Belmonte, told The Telegraph of London. “This is an important first step. Our next challenge is to guide the human cells into forming a particular organ in pigs. The ultimate goal is to grow functional and transplantable tissue or organs.”

That has already been done by the team, but with rat hearts grown in mice embryos. The technique involves creating a “vacuum” in the host’s DNA that is filled in by the donor’s stem cells, creating a “hybrid” or “chimera.”

But McQueen noted that the Catholic Church had considered the possibility of transplanting animal hearts and artificial organs to humans and found it morally licit. “Off the top of my head,” she said, “this isn’t different from giving someone an artificial heart.”

The two lines that must not be crossed, she insisted, are putting human brain cells or gonadal material into animals.

“The brain, the ability to reason, that is what makes us distinctly human,” McQueen said.

But McQueen also warned against transferring reproductive organs or fertilizing the eggs of one species with sperm of another.

“Then you would be transferring something of the species and DNA and something born from it who would be called human,” she said.

Dr. Michelle Cretella, president of the American College of Pediatricians, told LifeSiteNews, “The gravest ethical concern I have is failure to prevent human stem cells from integrating into the developing embryonic animal's brain. We would then have a human-animal hybrid with some amount of human intellect, awareness and personhood who would not only be used as a means to an end but also killed in the process of organ harvesting.”

Furton said the Salk research did not appear to be “fooling around with what it means to be a human being in any sense of the word,” while it could well be “a plentiful source of transplantable organs, taking some of the pressure off living donors” and off medical institutions to push for euthanasia or declarations of brain death.

Furton pointed out the “the Catholic Church was way ahead of the science” with the 2001 report from its Pontifical Academy for Life titled, “Prospects for Xenotransplantation: Scientific Aspects and Ethical Considerations.”

Contradicting the position of secular environmentalists that humans are just one species among many, the document expresses the traditional Biblical teaching: “Everything that exists is intended for him [humanity],” though not merely to exploit, “but also because woman and man have the task of cooperating with the Creator in leading creation to its final perfection.”

While the document stresses that researchers bear a serious moral responsibility to take great care against genetic mutations escaping the laboratory, its main finding is that “Catholic theology does not have preclusions, on a religious or ritual basis, in using any animal as a source of organs or tissues for transplantation to man.”

Therefore, the document continues, “God placed … nonhuman creatures at the service of man so that man could achieve his overall development also through them.”

The document notes that only some organs can be transplanted morally from animals to humans. “The implantation of a foreign organ into a human body finds an ethical limit in the degree of change that it may entail in the identity of the person who receives it.”

Some, like the face, are linked symbolically to personality. Others, like “ the encephalon [brain] and the gonads, are indissolubly linked with the personal identity of the subject because of their specific function.”

In sum, the document says, the risks and benefits are both great but uncertain and to proceed with extreme caution.

The erosion of ethics in organ transplantation: what's a Catholic to do?