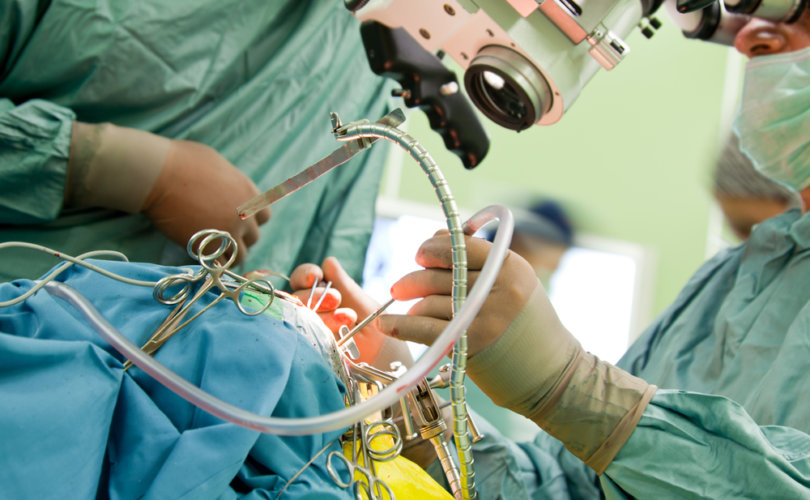 One test subject is Sonia Coontz, 36, of Long Beach California who was so fearful she wouldn’t be able to walk unaided down the aisle, she postponed her marriage. After the brief treatment under partial anaesthesia she married and is now pregnant.

“My right arm wasn’t working at all,” she said, according to a Stanford University press release, describing the impact of her 2011 stroke. “It felt like it was almost dead. My right leg worked, but not well. I used a wheelchair a lot…After my surgery, they woke up.”

Coontz is among 18 patients given the treatment as a human trial run whose main purpose was to check for adverse side effects before researchers went ahead with a much more extensive test run. They all had holes drilled in their skulls so that donated bone marrow could be injected to the areas adjoining the damaged brain tissue.

Lead researcher Gary Steinberg described the test group as “People who had a hard time moving their arm or leg, or walking. People for whom we have no real treatment.”

Each of the test subjects had experienced their stroke at least six months prior. Ordinarily, after six months there is no hope of recovery from stroke, so any improvements in the test subjects could be ascribed to the stem cell treatment rather than any natural recovery.

“But after the injections we saw improvement in all 18 patients as a group, within a month,” Steinberg reported, according to the university release.  “Within days some were lifting their arms over their head. Lifting their legs off their bed. Walking, when they hadn't in months or years. The results were very exciting.”

There are treatments to mitigate the impact of strokes if administered within days. This treatment is the first that works long afterwards. The injected bone marrow, used for decades as a safe treatment for leukemia and other cancers, surprised the research team by disappearing from the brain within a month (while in leukemia treatment the marrow remains in the patient, producing red blood cells, but requiring the patient to take drugs to suppress his or her immune system).

But before the stem cells from the donor disappear, Steinberg says, they likely emitted “factors” that stimulated the “regeneration or reactivation” of nervous tissue in the damaged area. The particular kind of stem cells harvested from the donor’s bone marrow—mesenchymal stem cells—do not stimulate a strong immune response and may even suppress it.

The treatment flows from two converging currents of medical research: one, into the curative powers of adult stem cells; and the other, into the ability of the brain to repair itself.

Though brain marrow transplants for cancer come with a host of side effects, the Stanford test subjects reported nothing more serious than headaches, according to the study published on June 2 in Stroke, and this was likely due to the drilling and immobilizing of the head, rather than the stem cells.

Dr. Ray Bohlin, who holds a Ph.D. in molecular and cell biology and is head of Probe Ministries in Texas, told LifeSiteNews that the Stanford study is the latest evidence of the effectiveness of adult stem cells compared with embryonic stem cells. Advocates of embryonic stem cell research pointed to their versatility, since they have the potential to turn into any kind of tissue needed as the body develops. “But their versatility and the very fast rate of reproduction also means they produce tumors and cancers,” said Bohlin, hence their failure to produce cures.

Adult stem cells grow more slowly, and can only regenerate a narrow range of tissues, said Dr. Bohlin, but a wider range than initially expected. What’s more, “They have the ability when you introduce them into someone’s system to seek out the damaged tissue and repair it.” In many cases they can be extracted from the patient himself and then reintroduced, without arousing the autoimmune system.

For Christians like Bohlin there is another disadvantage to embryonic stem cells:  “You have to kill the embryo to get them.” For this reason pro-life advocates and Christian churches have condemned this line of research and President George  W. Bush restricted it. His successor President Barack Obama restored federal research funding but there are no reported results in terms of successful treatments.