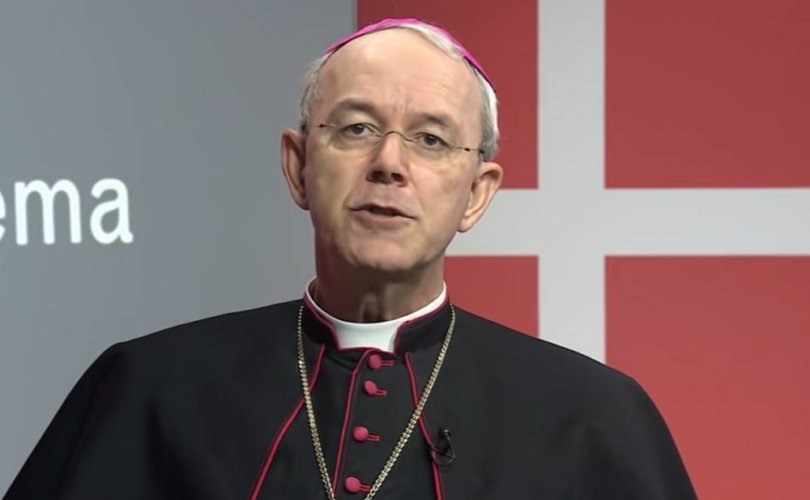 (LifeSiteNews) — In an interview published Thursday, Bishop Athanasius Schneider decried the acceptance of abortion-tainted “vaccines” as a way to “normalize the horror of genocide,” the genocide of abortion.

This normalization of the murder of abortion by the Church and the world, Schneider told Michael Matt, editor of The Remnant, comes about through the “grave sin of omission” of failing to “unambiguously protes[t] against the fetal industry and their products.”

Schneider pointed out that “churchmen and good Catholics forget or simply ignore” that available COVID-19 shots are a product of the fetal industry, which he describes as essentially “cannibalism,” that is, “to use, exploit, market the tissues of the bodies of the innocent children which are murdered.”

Without minimizing the seriousness of the fact that currently available COVID vaccines are ultimately a “product” of abortion via their testing and development on the cell lines of aborted babies, Schneider noted that this connection “can be” remote, whereas “we are not far away from the fetal industry, which is every day growing.”

“And so,” said Schneider, “when we accept” these so-called vaccines, “we support them.”

“And this horror is so monstrous that it cannot be compared with other evils which we in some way accept [in] this naturalistic, materialistic society, like products of slavery work. It is incomparable with the horror of murdering innocent children,” said Schneider.

He added that aside from a strictly moral point of view, the fact that these COVID-19 shots are still “experimental” and that their manufacturers are not held accountable “for negative possible effects, should make every human of common sense” “reflect … that there is something wrong, or at least, let us be cautious.”

When Matt suggested that there is more than a money-making incentive behind current radical COVID measures, Schneider agreed.

While there may be a “question of money” involved, Schneider believes this motive is “secondary.”

He pointed out that the methods used to drive vaccination “are already” those “of a real dictatorship,” because “second-class citizens,” who object to the “vaccines” either because of moral or medical reasons, are already being created in some countries where access to certain places, such as restaurants and theaters, is limited to the vaccinated.

Schneider compared these policies to the “apartheid in South Africa,” as well as the policy in Nazi Germany whereby in some places “it was written, ‘Jews are forbidden to enter.’”

“Now we are in a new dictatorship where it [is] written, “For [the] unvaccinated, it is forbidden to enter.”

Schneider believes the new “dictatorship of discrimination,” similar to these historical cases, demonstra[tes] that the push for vaccination “is not a question primarily of money.”

Schneider noted that some say “it is probable that one of the main aims behind this global vaccine campaign is to reduce the world population. A kind of population control.” Schneider does “not exclude” this possibility, because of the similar goals and methods used in dictatorships of “recent history.”

“There are two pillars, let’s say, which characterize these dictatorships. The first is lying. And this is diabolical. Because our Lord said the devil is the father of the lie,” said Schneider.

“And the second pillar of them is murder. And again, this is a diabolical, because our Lord said the devil is ‘a murderer from the beginning,’” Schneider continued, pointing out that “the devil hates human beings.” He cited the French Revolution terror as “the first great anti-human dictatorship,” “then, the Soviet communist terror, then the Nazi terror.”

“Now we have another very sophisticated terror,” said Schneider, that of “discriminating” against people and attempting to force “vaccinations” upon them.

“And so in this case the state is appropriating our body. So we are losing not only our property, now we are losing the right [over our] own body, which is a temple of the Holy Spirit,” said Schneider, calling the methods used a “neo-communist world dictatorship.”

Schneider hopes for “a world-wide alliance of people” who will “resist this new dictatorship” enforced under the “pretext of health care.”

“We have to resist them with all the means which we have.”