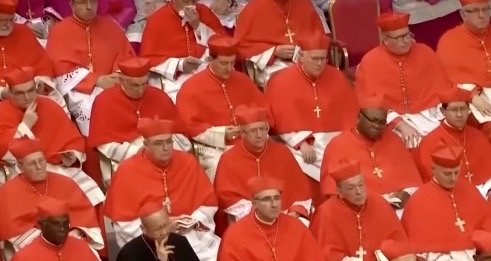 Edward Pentin, British journalist and author of the new book The Next Pope: The Leading Cardinal Candidates, told EWTN’s Raymond Arroyo last night that a College of Cardinals filled with Francis’ own choices does not necessarily mean the continuation of his policies in the next papacy.

“I think the fact that (the new Cardinals) come from the peripheries adds an interesting element, a surprising element, perhaps,” Pentin told the “World Over” host.

“The Global South, where these new cardinals come from, tends to be more conservative.”

Pentin added that whether one of these cardinals, if elected pope, would have to follow Francis’ “more progressive line” is “unclear and perhaps not likely.”

“I think, as the Roman saying goes, a fat pope follows a thin one, and I think we may well get the pendulum swinging back towards a more conservative pope, as that’s what usually happens,” he said.

“That is likely to happen.”

Pentin’s 700-plus page book gives an in-depth look at the 19 men he believes are the current front-runners for the papacy among the 124 cardinals eligible to vote. The author told Arroyo that the cardinals were chosen for their reputation for sanctity, teaching, fame, and having been mentioned by others as potential candidates. Pentin and his collaborators also looked at the 19 cardinals in relation to the three offices of every bishop: sanctifying, teaching, and governing.

“We looked at those three areas to see if they were qualified in these areas,” he said.

“Each profile in the book we divided into those three offices, and I think you get an idea into how they fare … ”

One of the frontrunners is Cardinal Robert Sarah of Guinea. Arroyo noted that if Sarah is elected, he will be the first African pope since Pope Gelasius I (492-496). Pentin said Sarah is seen not so much as an opponent of Pope Francis but as a prophetic voice.

“A lot of people here and elsewhere see him very much as a prophetic voice,” he told Arroyo.

“Someone who is speaking very much to the people at a time when the Church doesn’t have so much of a strong voice.”

Pentin indicated that Sarah’s willingness to speak “against the spirit of the times” has found favor with a “growing number of cardinals, bishops and lay faithful as well who feel that’s needed now.”

Cardinal Pietro Parolin, the Vatican Secretary of State, is also considered a frontrunner despite being connected with a Vatican financial scandal and the Holy See’s secret agreement with China. Pentin explained that this is because, after the “turbulence” of the Francis years, cardinals may want to go back to a known quantity, an Italian senior cardinal.

“Being Secretary of State does give him that sort of seniority and weight, of course, and there have been other previous Secretaries of State who have gone on to become pope,” Pentin said.

“We felt that he had a certain likelihood of being chosen because of that.”

Parolin is very respected for his diplomatic career, especially among diplomats in Vatican City, but Pentin acknowledged that there are “big marks against” the cardinal’s name because of the financial scandals and the China accord. He believes, however, that it’s hard to say that Parolin is responsible for these things, as his job is to execute the orders of Pope Francis.

Cardinal Luis Tagle, the former Archbishop of Manila, is also in the running, having appeared to be quite popular during the Youth Synod. Moreover, he is a known favorite of Pope Francis.

“He does have the quality of appealing to the youth, but there are obviously some concerns about him, too, which I have put in the book,” Pentin said.

These include Tagle’s murkiness on some aspects of moral teachings as well as belonging to the “Bologna School” of thinkers who see Vatican II as a “progressive” council.

Pentin brushed off potential criticism that publishing a book now about the next conclave is disrespectful to the current, very much alive, pontiff by pointing out that cardinals need in-depth knowledge about each other in advance.

“There’s been criticism in the past that the College of Cardinals don’t really know their brother cardinals very well, and they get placed in this conclave where they really don’t know who to vote for,” the author explained.

“They’re not equipped to know who to vote for, and we heard this at the last Conclave.”

The Cardinals’ lack of familiarity with each other has been “exacerbated,” Pentin said, by Pope Francis’ decision to do away with the usual pre-consistory meetings before new cardinals are made.

The author pointed out that conclaves happen very quickly after they are announced, and that does not give anyone enough time to research potential candidates.

“That’s why we wanted to do it now,” he concluded.