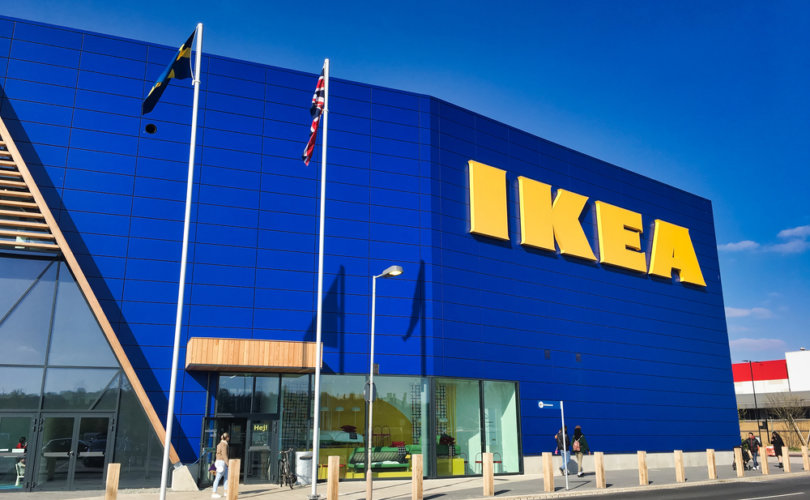 (LifeSiteNews) — Ikea, the world’s largest furniture retailer, has revealed plans to withhold full sick pay for any of its U.K.-based staff who haven’t taken a COVID shot if they are forced to isolate at home after coming into contact with a person who has tested positive for the novel coronavirus.

A report in the Mail on Sunday showed that the company, which employs over 10,000 people across 21 warehouse-sized stores in Britain, intends to cut sick pay benefits to workers who have not taken an experimental shot for COVID-19 if they are forced to isolate at home. Full benefits will still be afforded to the “fully vaccinated.”

As things stand in the U.K., anyone who has not received one of the abortion-tainted COVID shots is required to isolate for ten days if they are contacted by the National Health Service’s (NHS) Track and Trace team, informing them of their contact with a person who has tested positive for the virus. Anyone who has received a COVID jab is no longer required to quarantine, according to the ever-shifting coronavirus rulings.

Under British law the Swedish multinational company is still required to pay a minimum Statutory Sick Pay (SSP) to anyone who must take time away from work owing to the government quarantine requirement, meaning they could pay as little as £96.35 ($131) per week of absence. According to the Mail on Sunday, the average weekly wage of a full-time Ikea employee is between £404 and £452 per week ($550–615), representing a possible 77 percent drop in sick pay for the un-jabbed.

— Article continues below Petition —
PETITION: The Supreme Court MUST Block Biden's Vaccine Mandates!
Show Petition Text
24892 have signed the petition.
Let's get to 25000!
Thank you for signing this petition!
Add your signature:
Show Petition Text

According to an Ikea spokeswoman, the company has experienced an increased level of staff shortages due to the government’s quarantine rules for the unvaccinated, leading to the decision.

“Following the vaccine rollout and changes in the government’s isolation requirements, our approach to COVID-related absences evolved from September 20, 2021 — an approach developed with our social partners and national co-worker committee,” the spokeswoman said.

In comments to journalists, the company spokeswoman confirmed that “[u]nvaccinated co-workers without mitigating circumstances who have been identified as close contacts of a positive case will be paid statutory sick pay.”

“We appreciate that this is an emotive topic, and all circumstances will be considered on a case-by-case basis, therefore anyone in doubt or concerned about their situation is encouraged to speak to their manager,” she added. The company also recently rolled out an incentive for staff to take the experimental shots, offering paid leave for employees to book an inoculation appointment.

The push to vaccinate the majority of the world’s population, a project that has been willingly taken up by a number of large corporations, comes despite the Centers for Disease Control and Prevention (CDC) reporting an infection survival rate of greater than 99.95% for those under age 50. Additionally, there is no evidence that the shots stop infection or transmission.

Trial data for the jabs do not even claim to reduce hospitalization, but the measurement of success is in preventing severe symptoms of COVID-19 disease. Moreover, there is strong evidence that the vaccinated are just as likely to carry and transmit the virus as the unvaccinated.

Meanwhile, the list of FDA-recognized adverse events has grown from severe anaphylactic reactions to include fatal thrombotic events, the inflammatory heart condition myocarditis, and neurologically disabling disease like Guillain Barré Syndrome, as well as tens of thousands of recorded deaths and permanent disabilities.