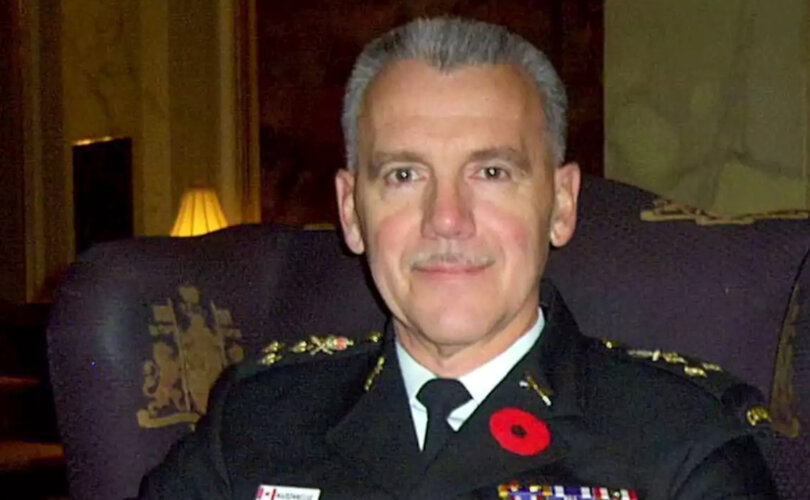 OTTAWA (LifeSiteNews) — A retired Canadian general who was asked to resign from a job helping veterans after being criticized by legacy media for giving a fiery anti-woke speech is fighting back before he is completely “canceled.”

In a Thursday column for the National Post, Lt.-Gen. Michel Maisonneuve, who is a 35-year Canadian Armed Forces veteran, spared no words in defending his recent anti-woke speech while clarifying some misinterpretations of his words.

“I said that mainstream media does not always provide a balanced view of all sides of an issue. Having seen the distortion of my words these past weeks I rest my case,” Maisonneuve noted in his essay.

“I will note, however, that while there is a dearth of unbiased journalism, there remains a segment dedicated to the truth, and for that I am grateful.”

On November 9 Maisonneuve drew headlines after he gave a rousing speech before a room full of military personnel in which he blasted cancel culture, climate change policies, divisive politicians, and “woke” aspects of the armed forces.

He also took a swipe at today’s mainstream press, saying that “balanced journalism is difficult to find,” adding that the practice of presenting the truth or “facts” is “no longer compulsory in mainstream media.”

The popular speech by Maisonneuve was made during a gala in Ottawa at which he accepted the prestigious Vimy Award.

In his National Post column today, Maisonneuve remarked that he takes “full responsibility for my remarks,” but did not apologize for his words.

“If you read any of the multitude of excerpts, tweets or blogs about my speech you will have gathered that I am unhappy with much of the current state of our country; I am. However, if you listened to my speech or read it in its entirety, you would also know that I believe in this country, its military and its citizens,” wrote Maisonneuve .

“I have faith that we can fix what ails Canada with leadership, service, unity and courage.”

Maisonneuve again stressed how he laments that “cancel culture” has become so prevalent today.

“There needs to be a plan in place for those who are found not guilty in order to resume their lives,” wrote Maisonneuve

“Cancel culture deems an accusation is as good as a guilty verdict. This is a blight on our society, as well as a direct contravention of the Canadian Charter of Rights and Freedoms.”

After he gave his anti-woke speech, Maisonneuve said people accused him of a “mistreatment of our First Nations” along with brushing aside issues of sexual “misconduct” in the military.

Maisonneuve clarified that despite what many legacy media writers claimed, “there is not one Canadian today, I am sure, who would want to resurrect residential schools or who believes we should try to assimilate Indigenous peoples.”

“But simply continuing to apologize moves us into the realm of virtue signalling. Isn’t it time to replace apologies with promises kept,” he added.

Maisonneuve said in direct terms that those in the military who are guilty of sexual misconduct must be punished.

“There are those who concluded from my remarks that I refuse to acknowledge issues of sexual misconduct in the military. Putting aside the outright stretch of imagination this deduction requires, I believe predators exist in every organization — our military included,” wrote Maisonneuve.

“I believe these predators must be found, charged and punished to the fullest extent of the law.”

As reported by LifeSiteNews, after the initial speech, Maisonneuve was suddenly asked to resign from a new role with a veteran pain research center.

Reacting to his life since the viral speech, Maisonneuve noted that the most “damaging translation of my remarks concerns its impact on my work with our veterans.”

“I have long been an advocate for our veterans and that will never change; there is no debt owed by a country greater than that owed to those who fought under its flag. Our veterans need help, not just with policies but also with Veterans Affairs Canada employees who have an understanding of the profession of arms and who demonstrate care and compassion for former service members,” wrote Maisonneuve.

During his speech, Maisonneuve was direct in his take on the current leadership of Canada under Prime Minister Justin Trudeau, without directly naming anyone.

In one notable moment from the speech, Maisonneuve asked, “Can you imagine a military leader labeling half of his command as deplorables, fringe radicals and less-thans and then expect them to fight as one?”

“Today’s leaders must find a way to unite; not divide,” he added at the time.

In his National Post column today, Maisonneuve said he “stands by” his assertion regarding leadership in Canada.

“I accused today’s leaders of dividing rather than uniting. Online searches of the terms ‘fringe radicals’ and ‘deplorables’ resulted in gleeful identification of the leaders who used these terms, which further cemented my dismissal as a right-wing extremist,” wrote Maisonneuve.

“I stand by my challenge to the leaders of today.”

Toward the end of the column, Maisonneuve said that he believes Canada is the “greatest country in the world with almost unlimited resources, and a tolerant, diverse and educated population who can aspire to the greatest heights.”

“We should be prepared to serve our country and be proud to do so. And our leaders must strive to unite us in sharing that vision. These are my words and I stand by them.”