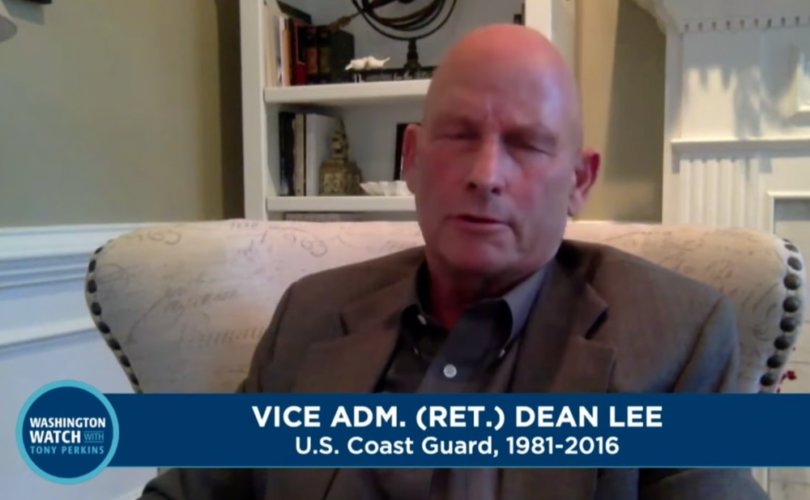 (LifeSiteNews) – A retired Coast Guard admiral released an open letter to all members of the Coast Guard demanding that the Department of Defense’s (DOD) military COVID-19 jab mandate be rescinded, calling it an “ideological purge” and voicing concerns that the mandate would hamper recruitment efforts in the midst of a recruitment crisis.

Retired Vice Admiral William “Dean” Lee of the Coast Guard posted the letter to Facebook Monday, American Military News reported. Lee began by disclosing that he received a shot for COVID-19 and is not averse to the vaccines themselves, but stated that removing military members for refusing to take the jabs violates constitutionally protected rights and hampers preparedness.

“Reports of recruiting struggles across the services indicate that the vaccine mandates are an impediment to recruiting, exacerbating the current recruiting and retention problems that are already impacting force strength in some DOD components,” wrote the three-star vice admiral. “Enforcement of the blanket mandate is also resulting in separations of thousands of personnel and therefore is exacerbating force strength issues, and thus readiness concerns.”

Lee also noted that the DOD’s policy with regard to the shots is outdated, referring to comments made by President Joe Biden on 60 Minutes last month (“the pandemic is over”) and the Centers for Disease Control and Prevention’s (CDC) updated guidelines. The latter essentially makes no distinction between vaccinated and unvaccinated individuals.

“The American people have moved on,” Lee stated. “The President himself has declared ‘the Pandemic is over.’ Yet, we continue holding fast to an outdated mandate, purging hundreds of dedicated sailors, even though we struggle to meet our recruiting goals. The legality of the order itself is under significant scrutiny, with at least three federal injunctions in place. The CDC just issued new guidance that advises that the vaccinated and the unvaccinated need not be treated differently.”

“It’s time to pause and reevaluate whether, for some demographics at least, the cure has become worse than the (diminishing) disease, and, in the case of the military’s mandate, whether material violations of law have occurred,” Lee continued. “Science has rapidly moved forward, but DOD inexplicably is not keeping up.”

Speaking to FOX News, Lee said that he wrote the letter to bring further awareness to the military’s vaccine mandate. “What I believe we’re seeing here is an ideological purge. This is just one way to get rid of people with ideologies that don’t match the current culture. We need people who have their moral compass set right,” Lee stated.

“And when we’re getting rid of the very people who are so convicted, they’re willing to give up their jobs, and I’m talking about lifelong pensions… They’re willing to walk away from that rather than turn their back on their religious convictions. These are the kind of people we want to keep in the military, and yet we’re purging,” he continued.

Lee further called the mandate a form of “harassment,” stating “It’s harassment at the hands of a government that has overreached their constitutional rights … My hope is that my own organization will stand up and address this and take root within the other military branches.”

The military has attempted to impose harsh COVID policies since the start of Biden’s term.

In August 2021, Defense Secretary Lloyd Austin imposed a military-wide jab mandate, directing the secretaries of all military branches to “immediately begin full vaccination of all members of the Armed Forces,” and “impose ambitious timelines for implementation.”

In December, the military began discharging soldiers for refusing the shots. The discharges, which threaten to  significantly deplete the manpower of America’s armed forces, have prompted legal challenges that have so far been neglected by the U.S. Supreme Court.

Lee has spoken out against the military’s jab mandate in the past.

In August, he criticized the Coast Guard’s decision to dismiss seven cadets for refusing the jab. Speaking to the Washington Examiner, Lee said, “My service is running around like crazy, patting themselves on the back and giving high fives to each other over their emphasis on diversity, equity, and inclusion. Well, this is neither diverse — it’s neither equitable or inclusive — because up to seven people that they’re discharging, five of them are members of minority status.”

“I mean, so that’s not inclusive. So what they’re doing is they’re excluding men and women of faith,” Lee continued.

Speaking to FOX News, plaintiff attorneys maintained that the Coast Guard has received over 1,200 religious exemption requests from Austin’s mandate, yet has only granted 12, leaving 99 percent of requests denied or unanswered. A Coast Guard spokesperson also told the outlet last month that the branch has begun discharging sailors that have refused to take the injections.

The Coast Guard currently faces a lawsuit from over 1,200 members of the Coast Guard filed last month by Thomas More Society attorneys seeking a temporary restraining order to prevent their involuntary discharge while also challenging the Coast Guard’s “across-the-board denial of requests for religious exemptions,” arguing that the Coast Guard was violating the First Amendment and the Religious Freedom Restoration Act with a policy that “violates … sincerely held religious beliefs.”

The lawsuit further argues that the Coast Guard negatively pre-empted religious exemption requests, and stated that the “Coast Guard’s religious accommodation process was a ruse.”

The few approved exemptions “were for service members already slated for separation or retirement,” the lawsuit notes.

The Coast Guard is not the only branch of the military to discharge servicemen for refusing the jab.

The National Guard is set to discharge about 14,000 Guardsmen within the next two years for their refusal of the jabs. Both Guardsmen and Army Reservists have been barred from participating in drill and training exercises since the beginning of July.

An Army spokesperson confirmed to FOX News last week that soldiers who have abstained from the jab that have not received an exemption will be “subject to certain adverse administrative actions.”

The Army, National Guard, and Army Reserve have approved only 32 permanent religious exemptions for the jab out of more than 8,000 requests, according to Department of Defense (DOD) data. Meanwhile, only 41 out of almost 1,200 medical exemptions have been granted.

Air Force pilots seeking a religious exemption to the DOD’s mandate are also barred from flying, while those with medical exemption have been allowed to perform their regular duties.

LifeSiteNews asked the Coast Guard for comment but has yet to recieve a response.

Young adults up to 100x more likely to suffer COVID jab injuries than be protected: study