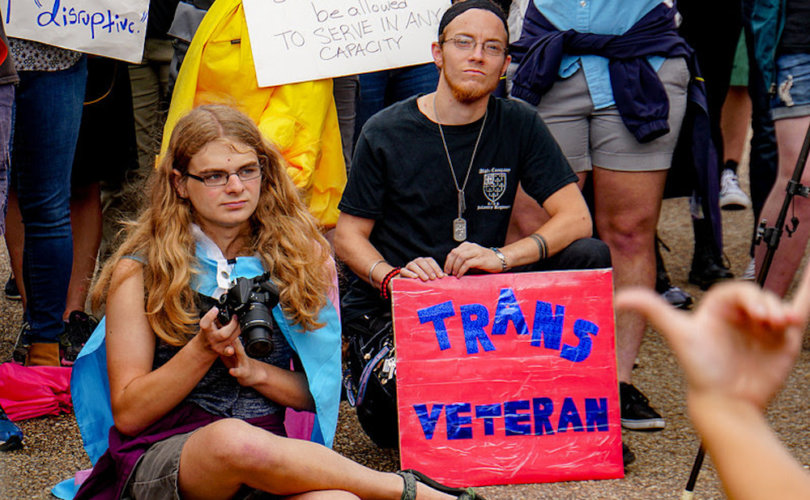 August 1, 2017 (LifeSiteNews) — A letter from 16 retired flag-rank officers, including seven major generals and an admiral, thanks President Trump for his “bold” and “extremely courageous decision” to reverse President Obama’s “transgender social experiment” in the military.

“There may be an enormous amount of vitriol directed at you for making this policy correction, but please know that overturning this policy may have done more in the long term to save the culture and war-fighting capacity of the U.S. military than perhaps any other military policy you will adopt as president,” states the July 27 letter, signed by three lieutenant generals, seven major generals, three brigadier generals, an admiral, a vice admiral and a Marine Corps veteran (all retired).

The letter states that keeping Obama’s transgender military policy — imposed without congressional action in the last year of his presidency — would have a “very high” fiscal cost to the government, citing a Family Research Council estimate of “between $1.9 billion and $3.7 billion over 10 years.”

“In addition, allowing transgender individuals to enlist would attract those persons who hope to have taxpayers pay for their 'transitioning,' including hormone replacement therapies and elective surgeries,” it states.

Such concerns echo the fears of ex-transsexual Walt Heyer of SexChangeRegret.com, who told LifeSiteNews that Trump’s policy, (if enacted) would thwart “turning the military into a giant, tax-funded, sex-change clinic.”

Defense Secretary James Mattis had delayed full implementation of the DoD policy accommodating the gender-confused pending a six-month review, before Trump opted to zero-out the policy altogether with three tweets July 26. Now conservatives eagerly anticipate the full implementation of Trump’s announcement while the Left gears up to fight it, including through court challenges.

“Mr. President, we note that your bold decision is supported by the American people who have a great reverence for the military,” the officers’ letter states. “We believe you will be rewarded for this brave decision by the American people.” It points to a June Rasmussen survey before Trump announced a policy change that found that “just 23 percent of likely U.S. voters think the U.S. military's decision to allow openly transgender people to serve is good for the military.”

A new Rasmussen poll on July 28 finds the nation split on Trump’s Twitter announcement against “transgender service,” with 44 percent surveyed supporting it, 45 percent opposing it and 11 percent undecided. Among Republicans, 64 percent supported Trump’s statement, and 58 percent of Democrats opposed it.

The military flag-rank officers’ letter states, “Even if it can be scientifically demonstrated that gender reassignment procedures medically benefit some individuals, there will still be concerns about the deployability of these individuals. DoD guidelines require that those serving in the military be ‘medically adaptable to the military environment without the necessity of geographic area limitations.’”

“However, both hormone therapy and gender reassignment surgery result in the need for specialized medical care which will not be available in all geographic locations,” it continues. “Aside from the time lost due to the non-deployability of the person transitioning, one must also consider the time taken away from commanding officers for transgender case management. … Needless to say, that is time not being spent training or thinking about how to engage and defeat our enemies in combat. The shifting of CO [commanding officer] time would have been a real detriment to military effectiveness.”