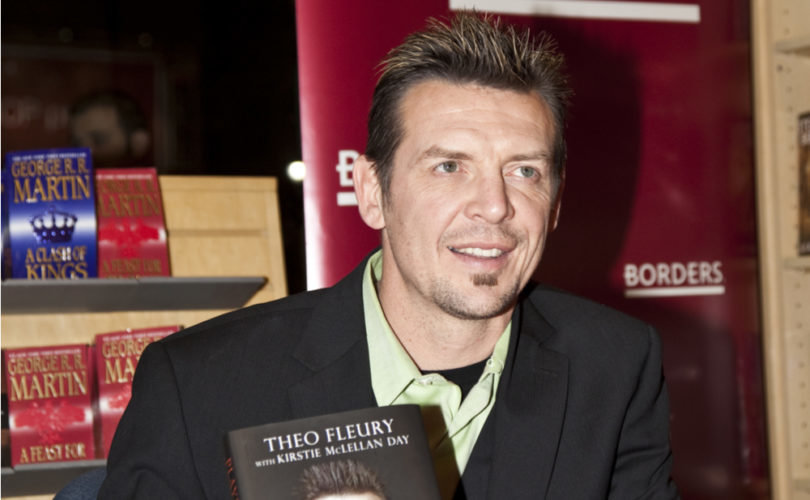 CALGARY, Alberta, April 27, 2021 (LifeSiteNews) – A retired Canadian National Hockey League player says he is “not afraid of being canceled” for speaking out against COVID-19 restrictions, adding that lockdown mismanagement and rising debt are a direct result of governments taking God “out of the equation.”

“And when you take God out the equation, what do you think happens? This … this is what happens,” Theoren “Theo” Fleury, who was raised Catholic, said in an interview with Rebel News that aired late last week.

“I also do know that God wins, and I would say, I’ve prayed more than at any point in my entire life, I’ve leaned on my faith to get through this very difficult year. Seeing what they are doing to the churches is absolutely the biggest disgrace,” Fleury said.

Fleury’s home life was chaotic. In his autobiography Playing with Fire, he attributed his local church priest as being one of his life’s most early positive influences. Unfortunately, the priest died of a heart attack, which left a huge void in his life in terms of having a positive adult to look up to.

Fleury, who is now 52 years old, was just a rising young star when he won his first (and only) Stanley Cup with the Calgary Flames in 1989. He spent many years with the Flames and played for a variety of other NHL teams before retiring from hockey in 2009.
Besides winning the Stanley Cup with the Flames, Fleury’s other career highlight came in 2002, when he along with his Canada teammates took home the Olympic gold medal in men’s hockey.

Fleury said that as someone who has dealt with depression and severe addiction, he is all too aware of the mental health toll COVID-19 lockdowns have caused.

“The catalyst that brings us into the mental health space and the addiction space is trauma, right, and COVID-19 is the most traumatic event since World War II. And so, seeing that the majority of the population already has trauma, we've just added another layer of trauma on top of that,” Fleury said.

Fleury battled addictions for years and has been sober since 2005. In his autobiography, he revealed that he was sexually assaulted by his youth hockey coach, Graham James, and for years suffered from the trauma associated with the abuse.

He was successful in filing a criminal complaint against James, who later pleaded guilty to sexual assault charges.

'I just tell them, you know, get on your hands and knees and pray'

— Article continues below Petition —
PETITION: No to mandatory vaccination for the coronavirus
Show Petition Text
1081775 have signed the petition.
Let's get to 1100000!
Thank you for signing this petition!
Add your signature:
Show Petition Text

Fleury now resides in Calgary and works as a motivational speaker.  He also helps many with addictions, as well as those who have suffered sexual abuse.

Fleury said the “government knows” COVID-19 lockdown measures add to people’s isolation and depression, which then can lead to severe trauma. He also said this is “planned” and not a “coincidence.”

Fleury said he has had “thousands of people” reach out to him with stories of how they have been having a hard time due to COVID-19 lockdowns.

“You know, thousands of people who have reached out to me who are going through difficult times. And, you know, I just tell them, you know, get on your hands and knees and pray and, you know, try to find, you know, some help, you know, through this whole thing,” Fleury said.

Fleury has been vocal on social media in his opposition to COVID-19 lockdowns and climate change hysteria, and has blasted Canadian Prime Minister Justin Trudeau and other politicians for a variety of reasons, notably for them promoting “global” agendas.
In his interview, Fleury said that when it comes to seemingly coordinated COVID-19 lockdowns, he believes it is connected to some kind of world agenda.

“You know, I you know, I've heard I've heard this story, I've read about this story and, you know, I said to myself, you know, there's, there's no way that this could possibly happen in my lifetime,” Fleury said. “Well, here we are in the middle of it. And yah, when people can't provide for their families, when people, you know, have trouble buying food and all that stuff, and let's face it, we live in Canada, you know, this isn't some third world country where we have no resources.”

“It's all ideological lunacy, this has been tried 24 times in the history of this planet and 24 times it's failed. And 100 hundred million people have died because of this ideology.”

Fleury said that the politicians in charge have not led with any “compassion,” bringing up again his opinion that its all part of an agenda.

“You know, people will follow you to the ends of the earth. And there's not one politician in Canada who has shown any compassion or any empathy or nothing. It's about agenda, it's about, its all about, you know, agenda and this hidden plan that, you know, is being played up,” said Fleury.

“You can't fix stupid, that's the bottom line. You know, there are no critical thinkers left because they've indoctrinated our kids in the schools. And this generation are now adults and they've been indoctrinated to, you know, to believe everything that they're being told.”

Fleury said of Trudeau: 'He is so, so phony' and has 'no soul'

Fleury said Trudeau has shown no “compassion” and is a “phony” leader who is leading Canada as a “traumatized” man.

Fleury said that, ultimately, Trudeau and other politicians have promoted lockdowns to “buy votes.”

“It's all about buying votes for the next election. That's it. You know, and not a lot of people, you know, are able to think, you know, on, on a different level, you know, but, you know, when you're traumatized, which the majority of the planet is, you know, then you just going to fall in place because all you're all you're doing is surviving day to day, you know,” Fleury said.