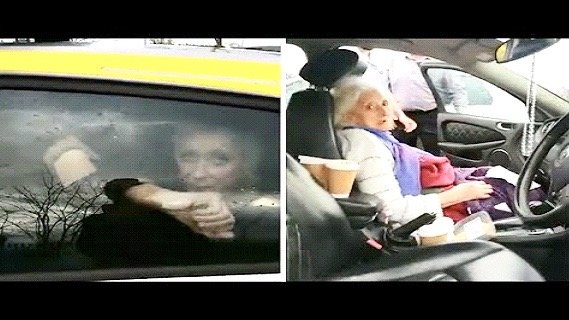 MARKET WEIGHTON, Yorkshire, England, November 9, 2020 (LifeSiteNews) — A retired nurse in England was arrested for taking her ailing mother from a care home.

Last week, Ylenia Angeli, 73, took her mother, Tina Thornborough, out of Northgate House and, with the aid of her own daughter, Leandra Ashton, 42, bundled her into her car. Angeli then drove to a nearby parking lot to process what she had done and was apprehended by police.

Angeli said she acted on “instinct” after she and Ashton, looking at their loved one through the care home window, noticed a deterioration in Thornborough’s mental condition. Ashton told British media that whereas Tina, who has dementia, normally “lit up” when they came to see her, this time she merely looked confused. Due to Covid regulations in England, people cannot visit their elderly relations in person in some care homes, but can only wave and try to communicate with them through windows.

Saddened by the change, Angeli pleaded with a care home employee to have Tina wheeled out into the garden so the two could visit her there. The employee refused.

“There was a gap in the door; my mother was just three feet away,” Angeli told British media.

“All I knew was that I wanted to hold my mother and nothing was going to stop me,” she continued.

“Being separated from her was almost too much to bear. After nine months of Covid restrictions, I couldn't stand it anymore. Nothing was planned, nothing was intentional; it was pure instinct. I needed to wrap my arms around her and tell her she was loved.”

According to Angeli, she barged in despite the employee’s physical attempt to keep her out and put her arms around her mother “for the first time in nine months.” The two began to cry, and the nonagenarian kissed her daughter while the Northgate House employee tried to pull her wheelchair away. The employee then left them together, saying she was going to call the police. Because Tina Thornborough has dementia, the care home has custody of her.

Angeli then wheeled Tina outside to see her granddaughter, and then the two decided to put Tina in their car and drive away.
“We put Nan in Mum's car and drove to a garden center about five minutes away and parked up to catch our breath and work out what we were going to do,” Aston told media.

“We were both shaking, thinking: 'Oh my God, what has just happened?'” she continued.

“Tina seemed so happy to be somewhere different and with us, she was looking around and trying to kiss us. We just wanted to take her home and care for her during lockdown.”

However, the Northgate House staff had written down their license plate number, and soon the women were boxed in by police vehicles. Angeli was arrested, handcuffed and put in the back of a police car. Ashton began to record the scene.

“My 97-year-old nan (…) is being taken back by force to her care home,” Ashton said as she filmed.

“My mother has been arrested,” she continued.

“She is a nurse. She is a fully qualified nurse who is wishing to care for her own mother. And here we have an incredible use of police time to take my 97-year-old grandmother back to the care home where she is deteriorating, where we haven’t been able to see her for nine months.”

Ashton told someone off camera that she was not going to stop filming so that “everyone can see how ridiculous this situation is.”
According to Yorkshire’s Humberside Police, the care home had reported Angeli’s actions as “an assault.”

“We responded to a report of an assault at the care home, who are legally responsible for the woman's care and were concerned for her well-being,” assistant chief constable Chris Noble declared in an official statement.

“Officers found both women along with a third woman nearby and informed them that they would need to return the lady to the home, as is their legal duty to do so,” he continued.

“The situation was distressing and emotional for everyone and the woman did not want her mother to be returned to the care home staff.”

Apparently, the arresting police officer believed that he had to “restrain” Angeli.

“The officer in attendance had to ensure that that everyone was safe and in particular the 97-year-old lady who was frail and vulnerable and so made the decision to briefly restrain the 73-year-old woman until the situation was calm and under control,” Nobel stated.

“Officers then returned the elderly lady to the home. The 73-year-old lady was then immediately unrestrained, de-arrested and allowed to return home with her daughter.”

Now Angeli, who is in conversation with the care home and the local government, says she will not rest until she is permitted to take her mother home.

“I will fight with my last breath to get her home,” she said.

“If all else fails, I would gladly go to prison.”

The incident has become a cause celebre in the UK, where even window visits to the elderly were to be banned under the most recent coronavirus lockdown restrictions. The revised rules, which came in on November 5, do permit visits but leaves the quality of the visit — either through a window, outdoors, or in a designated room — to the discretion of the care home.

A spokesman for UK Prime Minister Boris Johnson admitted that the video released by Leanda Ashton is “distressing.”

“They clearly are distressing scenes,” he said.

“We absolutely understand how difficult the current situation is for families and those with loved ones in care homes and that’s why we’re publishing new guidance to enable more visits to take place,” he continued.

“But it does have to be done in a way that’s Covid-secure because of the risk to residents, family members and staff, and we need to ensure they are kept safe.”

Both Angeli and her mother were formerly residents of Shetland. Michael Robinson of SPUC Scotland told LifeSiteNews that the timing of the arrest was a “cruel irony” given the government’s attitude toward assisted suicide.

“It is a cruel irony that on the same day this incident occurred, the UK Health Secretary said that people are legally allowed to travel overseas for an assisted suicide during lockdown,” Robinson said.

“The Angeli case exposes the double standards of the current COVID restrictions,” he continued.

— Article continues below Petition —
PETITION: Stand with Poland for defending the unborn and churches against leftist aggression!
Show Petition Text
3555 have signed the petition.
Let's get to 4000!
Thank you for signing this petition!
Add your signature:
Show Petition Text

“Indeed, the current rules which are purporting to be in place to protect the vulnerable, however alarmingly in this case, are causing untold damage to the physical and mental health to the family involved.”