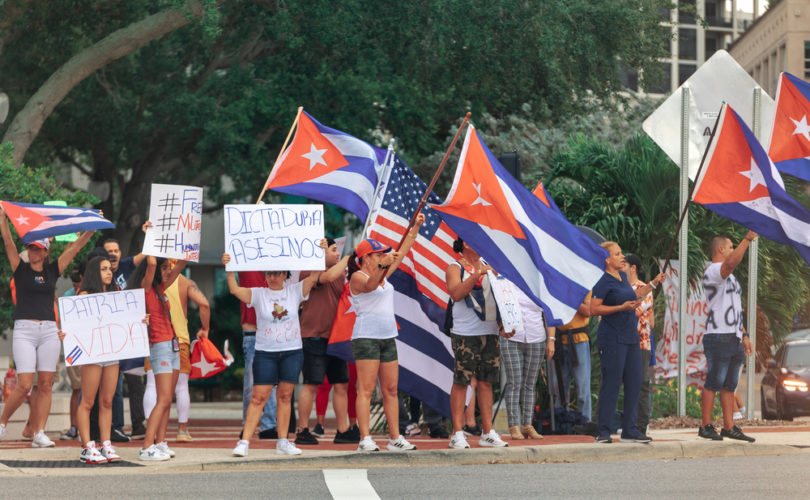 July 15, 2021 (NewsBusters) – While the liberal media disregarded the spread of COVID during Black Lives Matter protests in the summer of 2020, Reuters admitted on Wednesday that it couldn’t stand watching the people of Cuba protesting against communist oppression and crying out for their freedom. And even though Cuba’s authoritarian regime was rounding up journalists and there were still solidarity protests in South Florida, the broadcast networks were done covering the story.

“Protests in Cuba will increase the risk of COVID-19 transmission because of an already high level of cases and the more contagious Delta variant, health officials said on Wednesday,” they added, citing the Pan American Health Organization.

They also noted that besides wearing a mask and washing their hands, the PAHO “urged Cubans and tourists visiting the Caribbean nation to avoid crowds…”

“The gathering of individuals for protests… increases the risk of transmission, in particular in cases such as Cuba where you have active transmission in many areas over the last week…” said one official.

Meanwhile, Cuban-Americans in South Florida (plus other Florida residents) were still out in forces trying to bring attention and help to the people still trapped in Cuba. But despite their cries for aid, ABC, CBS, and NBC were finished with the story and had moved on, preferring to talk about President Biden drumming up support on Capitol Hill for in so-called “human infrastructure” plan.

Fortunately, the Fox News Channel’s Special Report saw the importance in the story and continued to give it airtime.

After noting that “thousands” of people were marching in “a dozen cities” because of “food shortages and chronic poverty,” Fox News correspondent Phil Keating reported: “Extra military and police on the streets have locked down any defiance. Dozens of dissidents have been reportedly arrested. The state confirming one protester died.”

He also showed off a video of a journalist getting arrested at her home during a live hit on a Spanish news program.

Keating reported on the ineptitude of the Biden administration as they still had yet to finalize a Cuba policy and they were refusing to take in Cuban refugees fleeing communist oppression:

Keating: U.S. fears of another wave of Cuban refugee migration a la the 1980 Mario boatlift, led the Homeland Security secretary to warn Cubans not to flee, emphasizing they will not be allowed in.

DHS Secretary Alejandro Mayorkas: The time is never right to attempt migration by sea. To those who risk their lives doing so, this risk is not worth taking.

“And several South Florida Democrats are now urging President Biden to come right down here to Miami and deliver a pro-democracy and human rights message and to voice support, once again, for the Cuban people,” he added as he wrapped up the segment.

The apparent indifference from the broadcast networks was made possible because of lucrative sponsorships from WeatherTech on ABC, Crest on CBS, and GEICO on NBC. Their contact information is linked so you can tell them about the biased news they fund.