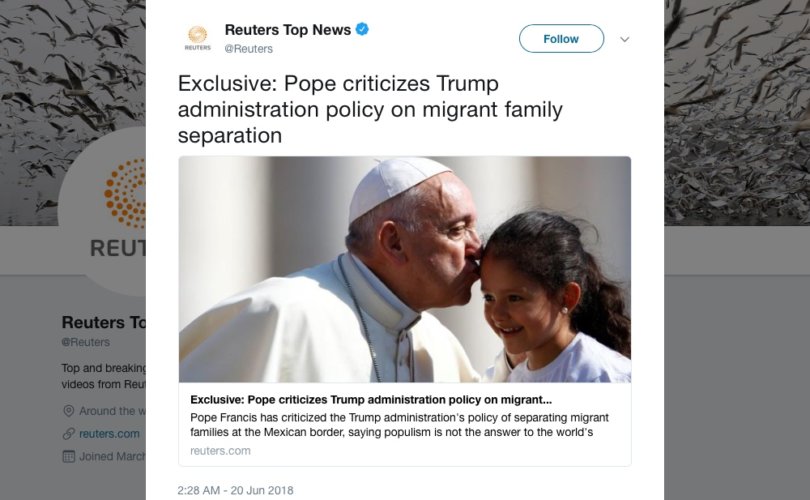 VATICAN CITY, Italy, June 27, 2018 (LifeSiteNews) – Reuters news service endeavored to pit Pope Francis against Donald Trump by selectively quoting the pontiff in its recent interview with him, portraying the Pope as saying the opposite of what he actually did on Trump and immigration.

Reuter’s piece bore the headline and angle that the Pope had criticized the Trump administration’s policy on family separation at the border, when in fact, Francis had repeatedly declined to criticize Trump directly throughout the reporter’s line of leading questions.

“The problem already existed there,” the Pope had stated, “it is not just Trump’s but goes back to previous administrations.”

Breitbart’s Thomas Williams called the move by Reuters to paint the pope this way “one of the most egregious cases of journalistic deception in recent memory.”

Pope Francis said repeatedly in the Reuters interview regarding the current administration’s immigration stance that he chooses to defer to the judgment of local bishops and that he’s aware that the problem was not caused by Trump but rather predates him.

“This is not the story Reuters published,” Williams said.

Reuters Vatican correspondent Phil Pullella had landed an exclusive, two-hour interview with Francis at the Vatican’s Santa Marta residence, where he asked the pope about various issues including the Church and China, Vatican reforms, sex abuse, women in the Church, immigration, populism and Trump.

The interview also produced the controversial story earlier this month in which Pope Francis had claimed he had learned about the dubia from the four cardinals in the newspapers.

This statement contradicted the cardinals’ accounts that they’d taken the long-standing practice of the Church of presented the dubia to Francis privately first for consideration, at the same time delivering a copy to then-Vatican doctrine chief Cardinal Gerhard Muller, before then going public with the dubia months later.

The Pope had criticized the cardinals, according to the Reuters interview, saying their approach was “a way of doing things that is, let’s say, not ecclesial, but we all make mistakes.”

“Apparently, Reuters had already prepared its script ahead of the interview, because that is not what the pope did or said,” Williams wrote. “In fact, Francis carefully avoided criticizing the president, despite his interviewer’s efforts to lead him into doing so.”

Williams detailed Pullella’s question-by-question effort to lead the pope to criticize the U.S. president, offering the reminder that it was Pullella “who famously lured Francis into calling Trump a non-Christian in 2016.”

The Reuters correspondent asked Francis to evaluate Trump’s work, chiefly his decision to withdraw the U.S. from the Paris Climate Agreement and to go “backward” in U.S.-Cuba relations.

Though he voiced disappointment, the pope afforded Trump the benefit of the doubt, remarking that Trump must have reasons for doing what he did.

“Regarding Cuba I was saddened because it was a good step forward,” the pope said, “but I don’t want to judge because to make such a decision he must have had his reasons.”

“Yes, President Trump’s decision on Paris pained me somewhat because humanity’s future is at stake,” he also said. “But he has at times made it known that he will reconsider it, and I hope he will rethink the Paris accords well.”

Pope Francis then added a key comment that he would repeat several times in the interview, Williams pointed out.

“Concerning my opinion on other things, I stand with the bishops and follow their lead,” Francis said. “Not to wash my hands but because I do not know the issues there very well. The bishops know and I stand behind their declarations.”

Next Pullella undertook the hot-button issue of separating immigrant children from parents, and asked the pope his thoughts of “the current situation where in recent months some 2000 minors have been separated from their families, from their parents, at the Mexican border.”

The pontiff carefully sidestepped the question, Williams, said, refusing to be baited into criticizing Trump.

“I stand by the bishops,” Francis said in his textual answer. “Let it be clear that in these things I respect the bishops.”

The answer contained the pope’s repeatedly expressed thought that he believes it’s more appropriate for the local Church to assess local problems than Rome.

Pullella persisted though; reminding the pope how he’s “always been concerned with immigration and separation from families.”

Francis stayed the course with his answer, and restated to Pullella for the third time that he defers on the matter to the bishops “who have worked hard on the question.”

It was then that the pope spontaneously made the significant statement that Reuters opted to completely omit in its recounting of the interview.

“But during the Obama years I celebrated Mass at Ciudad Juárez while on the other side of the border 50 bishops concelebrated and in the stadium there were many people,” Francis told Pullella. “The problem already existed there, it is not just Trump’s but goes back to previous administrations.”

Williams said Reuters had messed up and sent a large section of the original Italian transcript of the interview prior publication to a group of journalists, which led to Breitbart breaking the story on the disparity between what Reuters published and what the pope actually said.

Williams also noted how most mainstream media outlets reported the Reuters version of the story, failing to mention Francis’ attempts to keep Trump’s responsibility in the U.S. immigration crisis in context – despite having access to the original Italian text.

To date, Reuters has published at least three different articles on the Pullella interview with the pope, he said, but it has failed to include the pope’s comments on how the immigration crisis predates Trump and has also not published the full transcript so people can read for themselves what the pope actually said.

“If anyone still had doubts as to why people universally distrust the mainstream media,” Williams said, “including once prestigious news agencies, this umpteenth example of fake news should serve to allay them.”