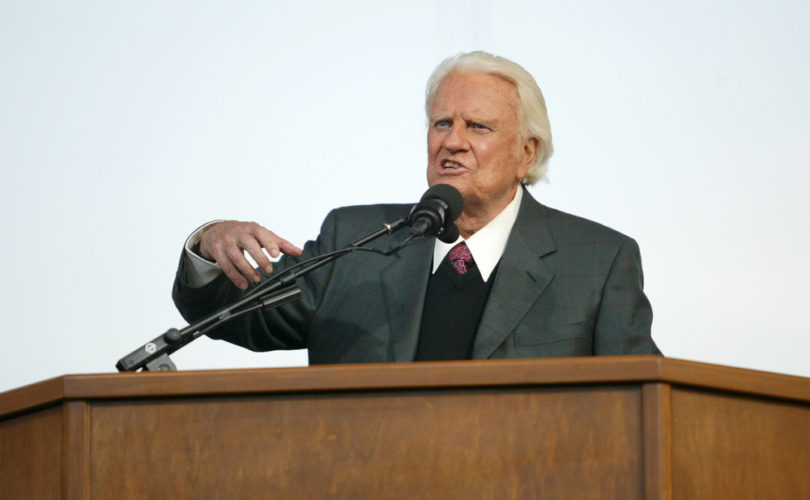 In a stern warning that compares America to Sodom and Gomorrah, famed evangelist Billy Graham says that the way out of the morass of wickedness the country finds itself in is for the country's leaders to acknowledge the power, and turn to the help, of prayer.

“Even though America is just as wicked as Sodom and Gomorrah ever were, and as deserving of the judgment of God, God would spare us if we were earnestly praying, with hearts that had been cleansed and washed by the blood of Christ,” said Graham in a commentary published in the Billy Graham Evangelistic Association's Decision magazine.

“The problems of the world will never be settled unless our national leaders go to God in prayer,” Graham said. “If only they would discover the power and wisdom that there is in reliance upon God, we could soon see the solution to the grave problems that face the world!”

Rev. Graham points out that America was “founded by men who believed in prayer” and that prayer can turn “the tide of history,” but “today the world is being carried on a rushing torrent of history that is sweeping out of control.”

“There is but one power available to redeem the course of events, and that is the power of prayer by God-fearing, Christ-believing people,” he said.

He states that, “One of the reasons the United Nations has become so ineffective in handling world situations is that there is no prayer, no recognition of God. Unless the leaders of nations turn to God in prayer, their best plans will fail, just as did the plans of those who built the tower of Babel.”

Those who read it were surprised to learn the article is actually a reprint from a sermon Graham delivered January 7, 1962, on his Hour of Decision radio program. The commentary by the 95-year-old Graham, titled “Turning the Tide of History,” is reprinted in the October issue of Decision magazine because it so clearly fits the current situation in America and the world.

“We have not learned that a nation is more powerful when it unites in earnest prayer to God than when its resources are channeled into defensive weapons,” he said. “We have not discovered that the answer to our problems can be through contact with God.”

“I tell you, history could be altered and changed again if people went to their knees in believing prayer.”