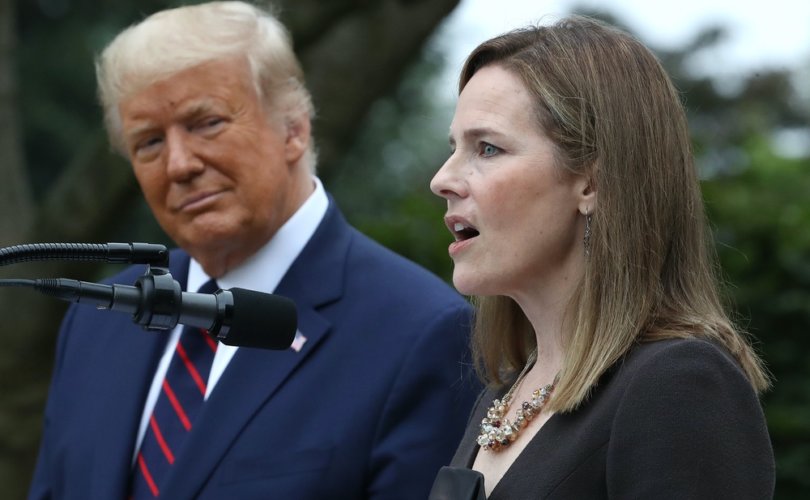 October 2, 2020 (LifeSiteNews) – President Donald Trump’s choice to replace the late Ruth Bader Ginsburg on the U.S. Supreme Court signed her name to a declaration to “oppose abortion on demand and support the right to life from fertilization to natural death” in 2006.

The left-hand page is a list of names of people who signed onto the statement, “We, the following citizens of Michiana, oppose abortion on demand and support the right to life from fertilization to natural death.” Among the signatories was Seventh Circuit Court of Appeals Judge Amy Coney Barrett, who was a University of Notre Dame law professor at the time.

The right-hand page features copy declaring, “It’s time to put an end to the barbaric legacy of Roe v. Wade and restore laws that protect the lives of unborn children”:

The ad that Barrett signed her name to was actually a two-page spread in the South Bend Tribune, and the full ad specifically calls for “an end to the barbaric legacy of Roe v. Wade”.

This is as clear a position as you'll ever see from a judicial nominee.

Here is the full ad: pic.twitter.com/PcZCcu89MS

Various left-wing activists and pundits have taken the ad as proof Barrett will vote to overturn Roe if confirmed to the nation’s highest court (a possibility her supporters hope for), and claim her signature should have been formally disclosed during her confirmation hearings for the Seventh Circuit in 2017.

To the first point, Right to Life Michiana told National Review that signatories to the annual ad are generally given just the left-hand statement to sign, and do not see a copy of the right-hand page before publication, so while Barrett is undoubtedly pro-life, she was not specifically endorsing the anti-Roe declaration. To the second point, Ethics & Public Policy Center president Ed Whelan argued that none of the language on Barrett’s 2017 questionnaire required disclosure of the ad.

Further, Barrett has never made a secret of her pro-life views. She was a member of Notre Dame’s Faculty for Life group, signed a 2015 letter expressing  “solidarity with our sisters in the developing world against what Pope Francis has described as ‘forms of ideological colonization which are out to destroy the family,’” and is reported to have signed another letter published by Becket Law criticizing the Obama administration’s contraception mandate. Perhaps most encouragingly, Barrett has also written multiple articles critical of the stare decisis doctrine, which grants weight to past rulings’ status as precedent, regardless of whether they were rightly decided.