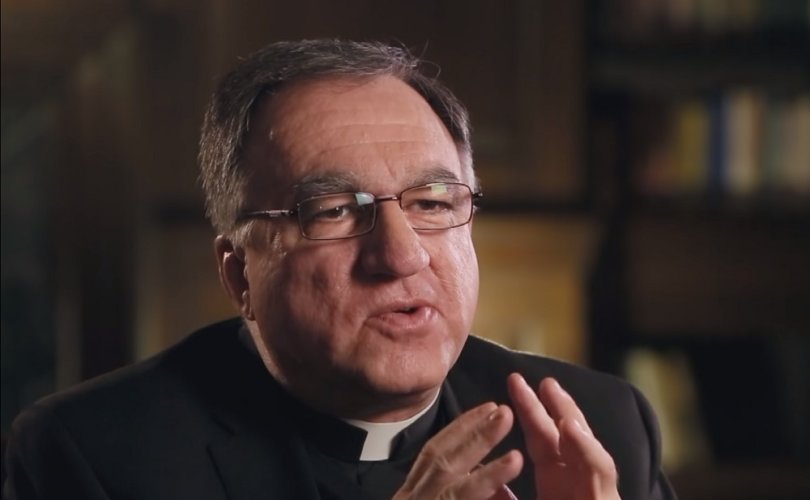 VATICAN CITY, September 3, 2020 (LifeSiteNews) — A priest who plagiarized under his own name for decades also plagiarized homilies he prepared for a leading cardinal.

Fr. Thomas Rosica, 61, has admitted to preparing three texts containing plagiarized material for Cardinal Marc Ouellet. Formerly the archbishop of Quebec City and the Catholic primate of Canada, Ouellet is now the prefect of the Congregation of Bishops.

The appearance of plagiarized material in Ouellet’s published homilies was discovered by Ohio Dominican University philosophy professor Michael V. Dougherty. Dougherty, an authority on plagiarism, examined the homilies in his recent book Disguised Academic Plagiarism and suggested that the cardinal’s homilies were ghostwritten by a priest he called “R.”

After first denying he was Ouellet’s ghostwriter, Rosica admitted to a Canadian newspaper that he was responsible for the controversial material.

“I did assist him with these texts back in 2006–2007. After that when he moved to Rome I had not assisted him with any texts. He is the author of his own work. I have not been his ghostwriter since assisting him on three different occasions back in 2006–2007 as he prepared for the Eucharistic Congress in Quebec City (2008),” Rosica told the National Post.

Rosica was clear that it was he, not Ouellet, who was responsible for the deception, not that he called it that.

“The texts were not properly cited for their sources,” he told the Post.

“The Cardinal is not responsible for my errors in proper citation of sources in the original drafts of the text I prepared. They are my errors.”

Rosica also admitted to drawing upon the material in the Ouellet homilies for subsequent works.

The principal source used by Rosica to create the homily Ouellet gave at Windsor’s Assumption University in April 2007 was a speech given by Cardinal William Levada five weeks earlier at the University of Louvain. But the material Rosica lifted was not actually by Levada, but by the Benedictine theologian Fr. Jeremy Driscoll. Both Levada’s Louvain homily and Ouellet’s Assumption homily were subsequently published in Origins magazine. Dougherty assumed that Levada had also employed a “plagiarizing ghostwriter” and that this was a curious case of “double plagiarism.”

Other uncredited sources in the 2007 homily Rosica prepared for Ouellet  include the theologians Edward Schillenbeeckx and Igor Kowalewski.

Two other works written for Ouellet by Rosica, published in 2008, contain  a similar “patchwork” of unattributed lines or passages taken from the writings of Cardinal Ratzinger/Pope Benedict XVI, St. John Paul II, Fr. Raniero Cantalamessa, the Lutheran theologian Mary W. Anderson, and an unknown writer from the Vatican Information Service.

As the writings of cardinals carry a certain magisterial weight, Dougherty is troubled that the thoughts of private theologians (including a non-Catholic) have been imputed to a cardinal, thus granting them a higher status among Catholics, especially Catholic scholars, than they should have. He is also concerned by the concealment of texts’ magisterial weight by minor clergy or laypeople who pass them off as their own. He calls both phenomena incidences of  “magisterial plagiarism.”

A further complication has arisen thanks to the strong probability that Cardinal Levada did not, in fact, employ a ghostwriter for the Louvain homily examined by Dougherty. Fr. Driscoll, today the abbot of Mount Angel Monastery, told LifeSiteNews that he had collaborated with the cardinal.

“Concerning the homily at Louvain … [Levada] wanted to bring to them a perspective he appreciated from discussions with me and probably other faculty members of Mount Angel,” Driscoll shared via email.

“We spoke about this, and then I authored part of the homily, or rather shared with him what I had written earlier. In the context of a homily I did not expect ‘credit’ for my thought, for a homily is not an academic setting.” the abbot continued.

“… I was more than happy if Cardinal Levada wanted to use thoughts I had formulated for his work as Cardinal Prefect. … For my part, I do not feel plagiarized.”

Driscoll added that he did not know how his words got into a homily by Cardinal Ouellet and also that he had not been contacted by Professor Dougherty.

“I refrained from contacting the parties in this case because in my academic studies of plagiarism, I focus on published texts, not the motivations of those involved in their manufacture,” Dougherty told LifeSiteNews via email this morning.

“To publish means to make public, and public texts deserve careful scrutiny when they are inauthentic. I hope the publisher, Origins, will issue the necessary corrections.”

The professor stated also that “authorship violations” are not good for the discipline of theology.

“The same passages are part of the published works of Abbot Driscoll, Cardinal Levada, Cardinal Ouellet, and Fr. Rosica,” he said.

“This creates confusion for assessing the authoritative weight of the texts.”

Dougherty has no issue with cardinals employing ghostwriters as long as the ghostwriters don’t plagiarize — or insert their own previously published ideas too blatantly in magisterial texts, as Archbishop Victor Manuel Fernández did as the ghostwriter for Pope Francis’s apostolic exhortation Amoris Laetitia.

However, David Mulroney, a former president of the Catholic University of St. Michael’s College in Toronto, told LifeSiteNews he is concerned about the practice.

“What's troubling is that the latest revelations force us to confront the fact that the problem is larger than a single plagiarist priest,” Mulroney said via social media.

“The idea that senior prelates need ‘ghostwriters’ to interpret and communicate the word of God is unsettling and, as we are discovering, dangerous,” he continued.

“It suggests a clerical bureaucracy that functions much as other bureaucracies do, instead of resolutely focused on the mission of saving souls, and it alerts us to a clubby clericalism that is too ready to overlook or ignore warning signs of problematic behavior by high-profile colleagues.”

Fr. Rosica has become a byword for plagiarism in English-language media since February 2019, when LifeSiteNews reported that he had presented the words of several sources as his own in an address he had recently given at England’s Cambridge University. Further revelations of Rosica’s career as a plagiarist soon followed. His fraudulent habit reached back over thirty years and involved newspapers, magazines, websites, books, scriptural reflections in missals, and academic journals. Unfortunately, to this day, work believed to be Rosica’s, but taken partly from others, is still publicly available online and in print.

Professor Dougherty told LifeSiteNews that academic plagiarism in humanities disciplines has been one of his research interests for the past decade. So far he has produced two books and several articles on the topic.

“When Fr. Rosica’s plagiarism appeared in the news last year, a colleague in theology suggested that I look at Fr. Rosica’s academic writings,” Dougherty said by email.

“After I requested a retraction for a plagiarized article in the journal Worship, I learned that philosophy professor Joshua Hochschild was also examining Fr. Rosica’s works, so we worked together to identify plagiarism in many books and articles by Fr. Rosica and to request retractions for them,” he continued.

“Many publishers and editors have issued retractions by now.”

In early 2019, Rosica was still an influential figure in the Catholic Church, known internationally as a Church spokesperson to the media, an adviser to the Vatican about the media, and the executive director of Canada’s Salt and Light Catholic Media Foundation. A priest of the Congregation of St. Basil, Rosica also wielded significant influence at such Basilian colleges as the University of Saint Michael’s College at the University of Toronto.

This high-profile career, launched when Rosica served as the national director of World Youth Day 2002, stalled and then crashed to earth after revelations of his plagiarism became international news. In February 2019, Rosica resigned from the governing council of the USMC. In March, the École Biblique et Archéologique Française de Jérusalem (EBAF) revealed that Rosica did not hold an “advanced degree” from the school, as he had led others to believe. In June, the Canadian Conference of Catholic Bishops formally withdrew works it had published with the Basilian priest. That same month, Rosica resigned from Salt and Light.

As the stories proliferated, some Catholics wondered why it was plagiarism, not Rosica’s combative style or endorsement of heterodox theologians and ideas, that was his downfall.

“I suspect that interest in this plagiarism case is high because Catholic readers rightly expect published religious and theological texts to be trustworthy,” Dougherty told LifeSiteNews.

“Those who produce fraudulent religious and theological texts have a duty to correct them,” he added. “The prolonged failure to correct or retract fraudulent texts is an ongoing injustice to readers.”

According to a publication of the Archdiocese of Toronto, Rosica is now a chaplain to the Basilian Fathers in a seniors’ home in Toronto.

LifeSiteNews has reached out to Fr. Rosica and to Cardinal Ouellet via the Congregation for Bishops.

Fr. Rosica told LifeSiteNews that he has never written for Cardinal Levada.