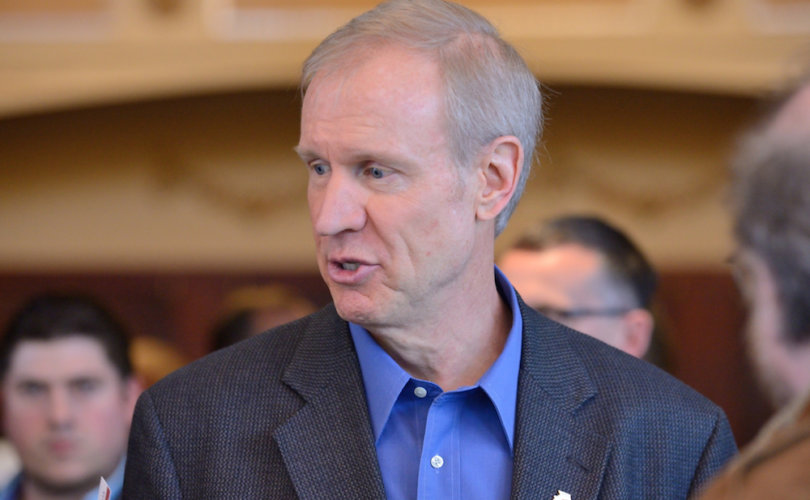 On Wednesday, the state conservative blog Illinois Review reported on a since-deleted Instagram post that appeared to show Rauner performing a “marriage” for two men. The Chicago Tribune confirmed the next day that he had indeed officiated the “marriage” of Mark Cozzi and James Goeke at a private club in Chicago on June 30.

“We are elated that Governor Rauner was able to officiate our wedding,” the couple told the Tribune. “He and his wife Diana are great friends of ours and wonderful people.”

Illinois Review notes that Cozzi is a Chicago Housing Authority commissioner and former member of the Illinois State Board of Investment, and that Rauner appointed him last year to the State Universities Retirement System Board of Trustees.

“It's clear that the governor has learned nothing from his near-loss in the Republican primary this year,” David E. Smith, executive director of the Illinois Family Institute, told the website. “He's not interested in attracting social conservatives to get out and vote Republican this fall.”

Smith added that the incident is a reminder that Rauner “does have a social agenda, and it’s not conservative, it’s not Republican, and it’s certainly not pro-life, ” according to the Tribune. He criticized Rauner for “how much damage he has done to the Republican brand and its policy goals.”

“Out of respect for a private couple I’d reserve my comment to, Bruce Rauner, you’re fired,” Republican state Sen. Sam McCann said in response, according to Capitol Fax.

This is far from the first time the GOP governor has offended social conservatives.

Rauner outraged pro-lifers last September when he broke an earlier promise and signed into law HB 40, which forced state taxpayers to pay for abortions through Medicaid and ensured that abortion will remain legal in Illinois in the event Roe v. Wade is overturned. He declared at the time that he would “never change” his view that women “must have” the legal power to abort their children.

According to Illinois Family Action, Rauner has also approved bills forcing pro-life health workers to refer pregnant women to pro-abortion doctors, banning therapists from treating gender confusion or same-sex attraction in minors, and allowing transgender people to receive birth certificates with the opposite of their biological sex.

Rauner narrowly defeated a pro-life, pro-family challenger, state Rep. Jeanne Ives, in the March GOP primary, and will face Democratic gubernatorial nominee J.B. Pritzker in November. Pritzker currently has a nine-point lead, according to a June poll by WeAskAmerica.