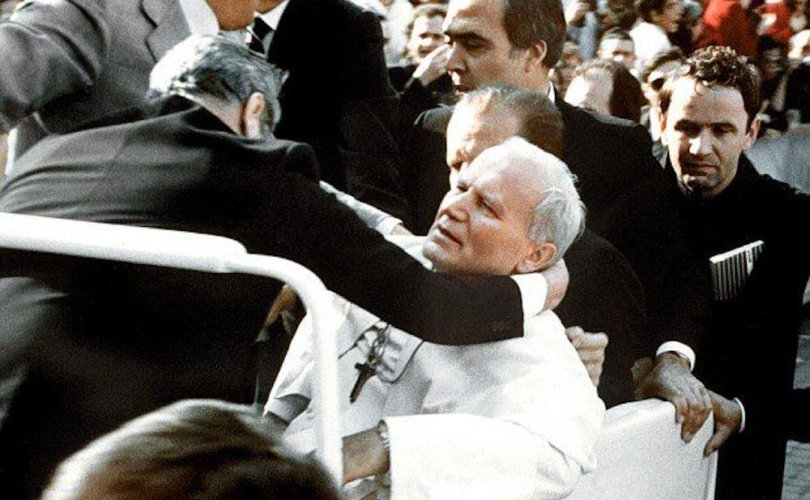 KRAKOW, Poland, July 27, 2016 (LifeSiteNews) — It was a glorious spring afternoon on May 13, 1981 in St. Peter’s Square as Pope John Paul II rode in his open-air Popemobile, greeting the crowd. Suddenly, the assassin Mehmet Ali Agca raised his semi-automatic handgun and fired two well-aimed shots at the pope, striking him in the abdomen. The bleeding pope immediately collapsed into the arms of his faithful secretary, Monsignor Stanislaw Dziwisz.

An ambulance rushed the pope to a nearby hospital with Dziwisz by his side the entire time. The pope was conscious throughout the drive, murmuring prayers.

Today, Cardinal Dziwisz, who is the archbishop of Krakow, revealed for the first time that the Pope, who later recovered and forgave his attacker, prayed during this time for the “sanctity of the family.”

“On that very day, I was not only in St. Peter’s Square, but I was in the jeep with the Pope when the bullet hit him,” the Cardinal related in an interview with EWTN Germany’s Robert Rauhut. “I supported him when his forces dissipated. So, I am a direct witness of the attack. I was with him in the ambulance. When he was still conscious, he prayed, he prayed even for those who had perpetrated the attack. Even though he did not know the attacker, he forgave him and offered his suffering to the Church and to humanity.”

Dziwisz said that while this part of the account is well known, there is a part which is unknown.

“That is what people tell each other, but I think that back then he also prayed for the sanctity of the family, since a manifestation on behalf of all aborted children was meant to have taken place. He linked this suffering to the suffering of Jesus Christ, who has redeemed the world through it. He was always convinced that any suffering has a purpose,” he said.

It is unclear what Dziwisz was referring to when he spoke of a “manifestation on behalf of all aborted children was meant to have taken place.”

“The communists had introduced abortion immediately, but he never accepted that. Instead, he always taught the sanctity of life – the sanctity of life from its beginning to a natural ending. Then he came to Rome, where the situation seemed similar: There was nothing to bring about change in matters of family and abortion,” he said.

It was to Cardinal Carlo Caffara, the Archbishop of Bologna, that John Paul II entrusted the task of founding a pontifical institute to study marriage and the family. In 2008, Caffara gave an interview in which he spoke about a letter he had received from the last Fatima seer, Sister Lucia dos Santos, concerning the final battle between God and Satan. When the Cardinal wrote to Sister Lucia 36 years ago, asking for her prayers as he began the process of founding the institute, he never expected a reply. Instead, the seer responded with a message of profound significance.

States Caffara: “In [her letter] we find written: ‘The final battle between the Lord and the reign of Satan will be about marriage and the family. Don’t be afraid,’ she added, ‘because anyone who operates for the sanctity of marriage and the family will always be contended and opposed in every way, because this is the decisive issue.’ And then she concluded: ‘However, Our Lady has already crushed its head.’”

When Dziwisz was asked in the interview if there is an attack on the family as pictured by Caffarra, he responded:

“Someone wrote: ‘If you want to destroy the Church, you have to destroy the family.’ That is the basis. Yet, we notice that the conscience awakens. There are more and more good and holy families in the world. That phenomenon is connected to the number of children.”