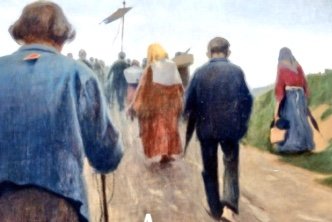 KRAKOW, Poland, December 16, 2020 (LifeSiteNews) — Would you walk from Warsaw to Poland’s holiest shrine?

Tens of thousands of Poles do so every year, and have been doing so since 1711. Even under the harsh Stalinist regime of the late 1940s and early 1950s, Poles walked over 140 miles from their capital to visit the Black Madonna in the Jasna Góra (“Bright Mountain”) monastery at Częstochowa. There were and are many other pilgrimages to Jasna Góra — some by foot from Kielce or Krakow, some by plane (and then car, bus or train) from Chicago or Toronto. However, it was from Warsaw that a certain young writer set off for Jasna Góra, 30 years before he won the 1924 Nobel Prize in Literature.

The writer was Władysław Stanisław Reymont (1867-1925), and Pielgrzymka do Jasnej Góry (A Pilgrimage to Jasna Góra) was his first book. Although not pious, Reymont was certainly patriotic, and he undertook the 10-day pilgrimage in 1894, the 100th anniversary of the failed attempt to liberate central Poland from Russian rule. During 123 years of foreign annexation by other European powers, the concept of Poland as the “Christ of Nations” was itself holy. By the 1890s, Polish intellectuals and artists saw the ordinary Polish Catholic peasant as the living embodiment of the holy Polish nation. Reymond, whose Nobel-winning book is entitled “Chłopi,” that is, “The Peasants,” was no exception. He seems to have embarked on the pilgrimage to see peasants as close and as personal as only a physically punishing, spiritual journey could make them.

“I went equipped with as little as possible,” Reymont began his account on May 5, 1894:

My long boots, an old coat, flat hat, and umbrella did not distinguish me much from the crowds gathered on the squares and road in front of the church. Besides, nobody paid much attention to me; everyone was absorbed in their own preparations for the journey and instead looked at the cloudy horizon. There was a little bit of rain, but I could not see much concern in their faces. The whole place was swarming. I pushed through with difficulty to get to the cemetery, and was pleased to see no veils, overcoats or fedoras. These were ordinary folk.

The patrician Reymont is not, however, and he begins his pilgrimage feeling very lonely and angry with himself with not being able to connect with the peasants around him. But the pilgrims are friendly and when not singing old hymns, praying, or giving impromptu religious reflections, they chat with the young man from Warsaw and each other. Reymont the reporter captures the pilgrims’ conversation as skilfully as he describes their appearance. Reymont the patriot is thrilled by their deep — and contagious — piety:

Solemn faith was evident in their faces. They believed so strongly in these words and their great souls submitted to this force that I got some kind of uncertain goose bumps. My brain, meanwhile, started to think about images from distant times and lands where Christ walked across sorry, burnt soil and where throngs of the poor awaited him.

As a collection of literary snapshots of 1894 Poland, Filip Mazurczak’s English translation of A Pilgrimage to Jasna Góra will be of interest to anyone of Polish heritage. As the description of a Catholic pilgrimage, it will be of interest to everyone who has been on, or wants to undertake, such a spiritual and physical challenge himself. It should also captivate students of folk religion and lay religious movements. Naturally, it would make an excellent Christmas gift for fans of 19th century Polish literature who cannot read 19th century Polish. Mazurczak, a bilingual Polish-American, has done all of us a favor in making this hitherto untranslated Polish classic available.

The translation isn’t perfect. Although Mazurczak usually conveys the distinctiveness of different kinds of Poles, as Reymont did, he introduces at least a few Americanisms that destroy the illusion that we, too, are on this very Polish pilgrimage to Jasna Góra. The consumptive young man traveling to the Black Madonna in the hope of a cure surely did not call his mother “Mom” or “Mommy.” I think here Mazurczak should have trusted his reader to cope with “Mamo” or “Mamusiu”(ma-MU-shu) — surely one of the softest, sweetest words for mother in existence — offering a translation by footnote if he liked.

Where Mazurczak needs to help his English-speaking reader over the linguistic styles is with the pronunciations of the towns and villages that provide the chapter headings. “Belsk” is self-explanatory, but most of his readers will have a problem with “Łęczeszyce” (roughly, “wayncheSHYTse”). Another crucial but missing aid to the reader is a map of Reymont’s route.

There is some excellent ancillary material at the beginning of the book: Mazurczak’s insights as a translator and a pilgrim are interesting, and Michał Gołębiowski’s essay about Reymont, his account, and the pilgrimage itself is stellar.

Finally, the color photographs of contemporary pilgrimages to Jasna Góra do not illuminate Reymont’s text, and I hope that Mazurczak and his publisher will replace them in later editions with the aforementioned map and illustrations or photographs of 19th century life in central and south Poland. The beautiful cover image, taken from a Polish painter’s Pilgrims, 1907, suits the book exactly.