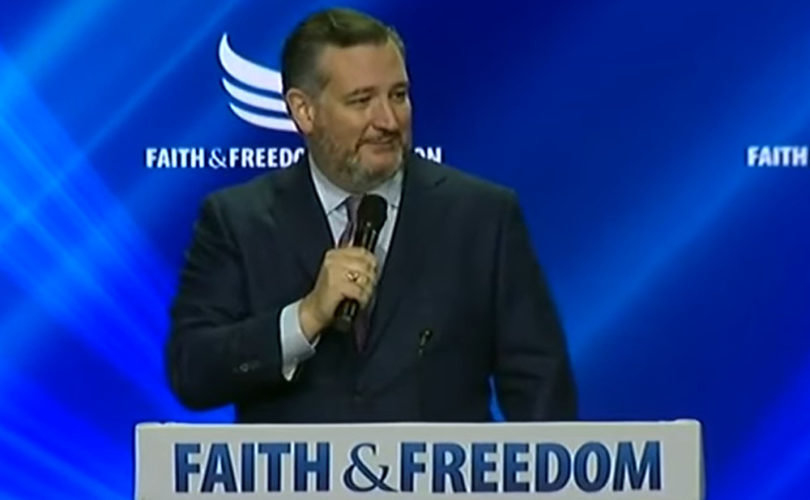 “The slumbering church needs to wake up,” Cruz told the audience. “The patriots across America who love our nation, who reject the stinking pile of lies that the left is selling, we need to wake up, we need to energize, we need to engage, and let me tell you: We can win, and we will win.”

The Texas senator said that less than half of the 90 million Evangelical Christians in the United States vote.

“The church is asleep,” Cruz pointed out. He spoke of his father Rafael Cruz, an ordained minister who “preaches to pastors all across the country.”

“Let me tell you right now,” Cruz said, “if we are going to defeat the woke assault, then all of us need to wake up.”

The senator began his speech by making a series of statements which he said would have been uncontroversial a few years ago, but which now could get an ordinary American “canceled” or “fired.”

“America is great,” Cruz began his list. “Christopher Columbus discovering America was a good thing. George Washington was an American hero. Thomas Jefferson was an American hero. Abraham Lincoln was an American hero. Our Founding Fathers were extraordinary patriots. America has been a force for good in the world. We should stand for our National Anthem. Police officers keep us safe. Marriage is a holy covenant before God. An unborn child is a child. Children do best when they’re raised by a mother and a father. Israel is our friend. The Wuhan virus came from Wuhan. And there is a difference between boys and girls.”

Cruz said America is under an assault never before seen in the history of the country, adding that the left wants to convince Americans with conservative values that they are alone.

“It’s easy right now to turn on the TV and be discouraged, be demoralized,” Cruz admitted, but he added that there is “a natural pendulum to politics,” arguing that the further the left goes, “the more the American people are going to bring us back and pull this country back from the edge of the cliff.”

“It took Jimmy Carter to give us Ronald Reagan,” Cruz said. “Joe Biden is Jimmy Carter 2.0. And I’m here to tell you, revival is coming.”

Cruz quoted Proverbs 30:5, which says that “weeping may endure for a night, but joy cometh in the morning.’”

“I’m here to tell you morning is coming,” Cruz said. “It’s one thing to say, ‘oh, I believe. I believe we’ll save our nation. It’s another thing to be fully committed with every ounce you’ve got to begin the morning on your knees [in] prayer for our nation, to spend the days standing and speaking the truth that America is great, that freedom matters, that faith matters, that we will take our nation back, that we will defend America. And revival is coming. God bless America. Revival is coming.”

According to the organizers’ website, the conference is “designed to forge a path toward a pro-family majority” and will “equip attendees with the knowledge and connections they need to drive engagement and voter turnout.”