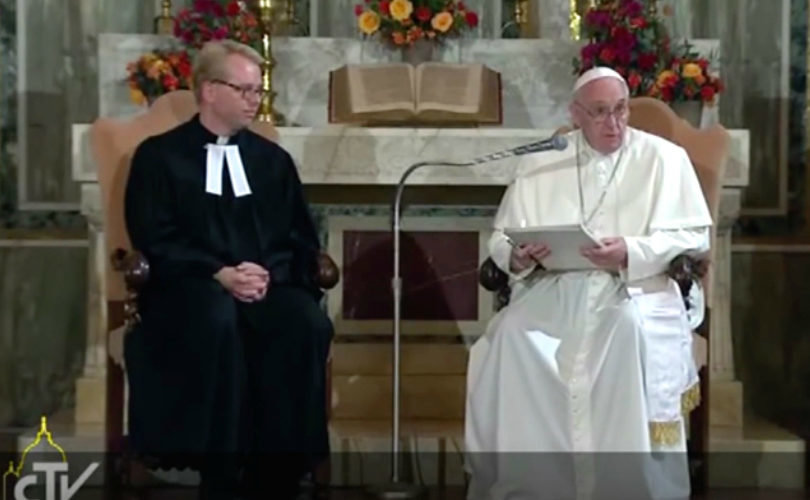 ROME, December 16, 2015 (LifeSiteNews) – Pope Francis “opened the door” to intercommunion between Catholics and Lutherans last month, beginning a “revolution,” says the pastor of the Lutheran community the pope visited recently.

“I think it’s typical for Pope Francis to open doors, and now we, as churches, have the duty to find ways to fill this open door with more of a life of ecumenism, of unity,” Pastor Jens Kruse of Rome’s Evangelical Lutheran Church said in a December 12 interview with the National Catholic Register’s Ed Pentin.

Pope Francis raised controversy last month after suggesting to a Lutheran woman who asked about receiving Communion with her Catholic husband that she could “go forward” guided by individual conscience.

The Vatican’s liturgy chief, Cardinal Robert Sarah, responded days later by stating that “Intercommunion is not permitted between Catholics and non-Catholics.”

“You must confess the Catholic Faith. A non-Catholic cannot receive Communion. That is very, very clear. It’s not a matter of following your conscience,” he told Aletelia at that time.

Sarah said that opening the doors to intercommunion would only “promote profanation” of the holy Eucharist.

“We cannot do this. It’s not that I have to talk to the Lord in order to know if I should go to Communion. No, I have to know if I’m in accord with the rule of the Church. It’s my conscience that says: ‘Go.’ My conscience must be enlightened by the rule of the Church, which says that in order to communicate, I need to be in the state of grace, without sin, and have the faith of the Catholic Church,” he said at that time.

STORY: Pope’s advice to Lutheran woman: A clue to how he’ll rule on Communion for the ‘remarried’?

But Pastor Kruse believes the pope has begun what he called a “revolution” regarding intercommunion.

“Before this meeting in our church we thought this door [to intercommunion] was closed and we’d have to wait for an eternity to celebrate the Eucharist together. But now there’s another way, and I think it’s a kind of revolution for both churches to think, with much more intensity, to find solutions to this question,” he said.

Kruse said he disagrees with the Catholic position that someone does wrong who receives the Eucharist while not consenting to the dogmas of the Church. He says the individual’s decision to respond to Jesus’ invitation trumps doctrine.

“Because it’s Jesus Christ who invites us to participate, it’s not the Catholic or Lutheran Church, and it’s not a question of Lutheran dogmas or Catholic dogmas. Jesus Christ himself invites us and gives us His blood and His body,” he said.