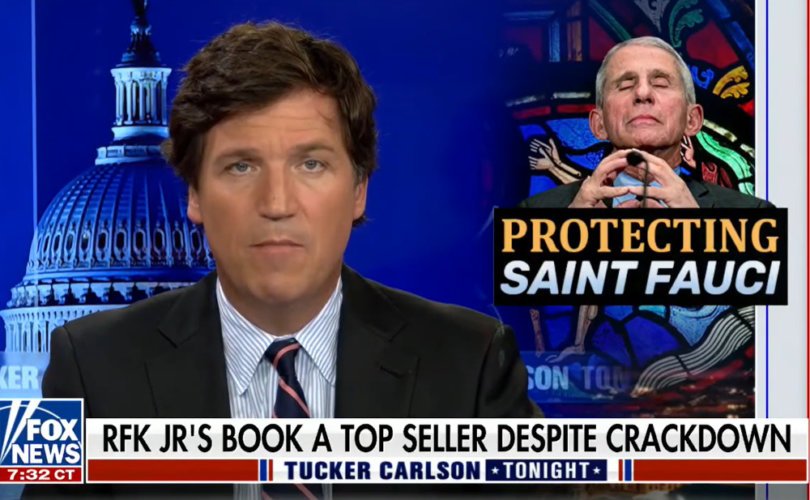 “It’s the bestselling book in America, and you won’t read about it in any newspaper,” Tony Lyons of Skyhorse Publishing told the popular FOX News host. “If you try to advertise on … any of the online platforms, they send you a notice that you can’t advertise it there. It’s just really crazy that this can happen in America.”

“There has to be room in this country for dialogue and debate,” Lyons added.

“Yes, especially over this, which is a very serious book,” agreed Carlson. “I’ve read it, and it’s not crazy in the slightest. It’s actually far less crazy than a lot of things I see on NBC News. And again, it’s meticulously researched.”

Carlson noted that “YouTube shut down a videotaped book signing because ‘it violated community guidelines and spread misinformation.’ Amazon limited advertising for the book,” and “many booksellers are just refusing to sell it.”

“And yet despite all of that, people are buying it.”

“It hasn’t been reviewed anywhere” in mainstream media, said Lyons.

“This is a book that has 2,194 citations,” he noted. “It was vetted by doctors and scientists and lawyers. It’s got a blurb by a Noble Prize-winning doctor.”

Calling that “amazing,” Carlson asked, “Were you worried about publishing this book?”

“I was worried about not publishing this book,” Lyons responded. “I mean, there are two sides to every story, and The Real Anthony Fauci is a meticulously researched book.”

“Bobby Kennedy worked 16 hours a day, seven days a week for nine months on this book. You know, he gave his whole heart and soul to it.”

Kennedy himself appeared on Tucker Carlson Today, which is distinct from Carlson’s nightly news show, earlier this month to discuss in great depth vaccine safety, the influence Fauci and pro-abortion billionaire Bill Gates have over global “health” efforts, and the disastrous National Childhood Vaccine Injury Act of 1986.

According to a summary of the book from Children’s Health Defense, Kennedy’s advocacy organization, The Real Anthony Fauci describes how America’s lockdown czar