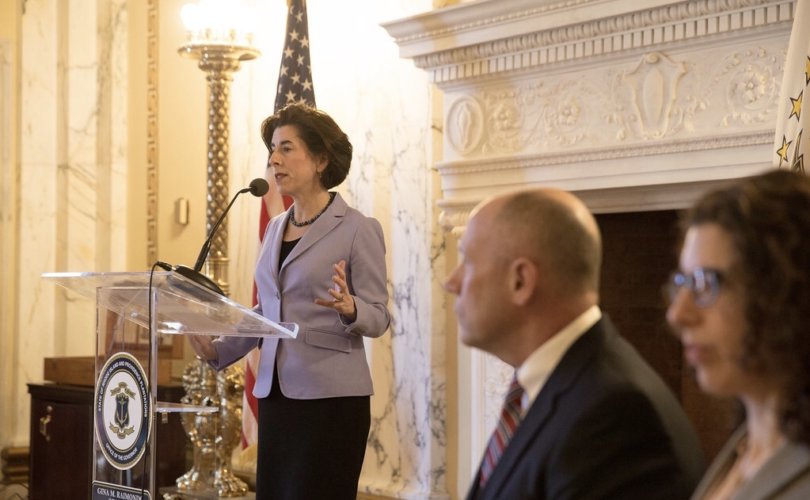 On Wednesday, Democrat Gov. Gina M. Raimondo signed into law an abortion bill that practically eliminates protections for unborn human life from abortion. The lower house of the Rhode Island General Assembly had already passed its version of the so-called Reproductive Privacy Act in March and then approved on Wednesday the state Senate version of the bill that had been sought by abortion advocates for decades.

While most Democrats voted for the bill, there were significant exceptions. Frank Lombardi, for example, beseeched his fellow Democrats to vote against the legislation because “we are all children of God and I tell you, we will all be accountable to God for the position of influence that He has given to all of us,” according to the Providence Journal.

Senate Democrats who joined with Lombardo included Elizabeth Crowley, Harold Metts, and Senate president Dominick Ruggerio. Metts, a Baptist deacon, said he could not vote for an “unGodly” bill, saying human beings are “made in God’s image.” House Speaker Nicholas A. Mattiello, a Democrat, also voted against the final version of the bill.

But at 9 p.m. that evening, Gov. Raimondo — a Catholic — signed the bill into law as fellow Democrats looked on. Recapitulating the fears expressed by Democrats nationally that a conservative majority on the Supreme Court could well overturn the 1973 Roe v. Wade decision that permitted abortion nationwide, Raimondo said, “In Washington and, frankly, throughout the country and many other states, there is a great deal of anxiety about women’s right to health care.”

“This bill that I’m about to sign codifies Roe v. Wade,” she said. “It preserves the status quo that has existed here in this state for 50 years. As such, it’s a very important bill.”

Acknowledging that she saw some good among her vocal pro-life opponents, who at times filled the capitol rotunda with demands that she defend human life, she said, “It’s a difficult issue and there are good and principled people on either side of the issue.” However, she said a majority of her fellow citizens favored the proposal, which was thus “the right thing to do.”

The bill had faced significant opposition in Rhode Island, which has the highest proportion of Catholics of any state in the union. Rhode Island now joined Illinois, New York, and Vermont in passing radical pro-abortion legislation this year.

Just before the vote on Wednesday, Bishop Thomas J. Tobin tweeted, “Praying fervently today that God will enlighten the minds and hearts of R.I. State Senators to vote against the horrible, extreme pro-abortion legislation being considered today.”

Pro-life leaders said the vote shows that Democrats have come to the brink of infanticide while calling on pro-life Rhode Islanders to support pro-life candidates and run for office.

Rhode Island’s new abortion law codifies Roe v. Wade while prohibiting the state from restricting abortion before or after fetal viability, even until birth, if an abortion necessary for the health or life of the mother.

“The new law says the state will not restrict the right to an abortion prior to fetal viability or afterward if an abortion is necessary for the health or life of the mother,” the Associated Press reported. “It repeals older state abortion laws deemed unconstitutional by the courts. The bill was approved Wednesday in the Senate 21 to 17 after two hours of debate, then in the House 45 to 29 after a half-hour debate.”