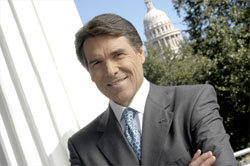 In separate media appearances, the potential rivals have become the latest Republican contenders to discuss whether they would personally attend such an event if invited by a homosexual acquaintance – a question media watchers say is intended to cast Republicans in a bad light.

Radio talk show host Hugh Hewitt, who has made the question a staple of his recent interviews, asked Perry if he would accept such a hypothetical invitation.

“I probably would, but I think the real issue here is that’s the ‘gotcha’ question that the Left tries to get out there,” the governor replied.

“I'm part of the problem if it's a gotcha question, but it grows out of my belief that we're focusing on the wrong thing,” Hewitt said.

Perry agreed, saying “the economy” and “national defense” were the real issues confronting America's future. “And if you’re not really not talking about those two on a regular basis…then you’re spending some time that frankly doesn’t need to be spent on some issues that are secondary or tertiary to the future of this country.”

CNN's Sara Murray asked John Kasich the same question in earnest, rather than as an illustration of the media's misguided priorities.

“Sure, if they were people I was close to,” Kasich responded. “I go to weddings of people I'm close to. And in fact I have a friend who's gay who asked me if I would go to his wedding, and I said, 'Let me think about it.'”

“I went home and I said to my wife, 'My friend's getting married. What do you think? You wanna go?' She goes, 'Oh, I'm absolutely going,'” Kasich said.

“I called him today and said, 'Hey, just let me know what time it is,'” he said.

Murray, who interviewed Kasich before a campaign appearance gauging interest in a 2016 presidential run, asked how he could oppose redefining marriage as public policy.

“Just because you're opposed to something doesn't mean that you don't care about your friends, other human beings,” he said. “My friend knows how I feel about the issue, but I'm not here to have a war with him.”

Kasich said, “I don't need to be making big statements about any of this. I'm not going to change my position on it. … But look, it's pretty simple: I care about him. He cares about me. He invited me to something. I'm going to do it. It's not that complicated.”

Kasich briefly ran for president in 2000 after a stint as a leader of the House of Representatives. After a rocky fight with public unions, Kasich was re-elected by double-digits in the bellwether state of Ohio, with strong support from the state's pro-life community.

Although he has not formally announced his candidacy, he is not coy about the fact that he is thinking about it. He told a group of supporters at a barbecue in Gramling, South Carolina, that he was discerning whether he had a higher calling to run for president.

Now, he says, he spends his time asking, “What's the Lord want me to do?”

A number of potential Republican candidates have faced the question of whether they would personally go to a same-sex commitment ceremony.

Marco Rubio has said he would. Wisconsin Gov. Scott Walker said he has attended a reception of a same-sex ceremony, but not the service itself.

Rick Santorum has given a firm no, and Ted Cruz evaded the question by saying, “I haven't faced that circumstance.”

As homosexuals comprise an estimated one to three percent of the U.S. population, many Americans will never face the situation, either.

“People are dismissing it as a gotcha but I think it’s interesting as a gauge of whom each candidate’s trying to appeal to,” wrote blogger AllahPundit at HotAir.com. “I’m not surprised Perry’s willing to attend. He became more of a “values” candidate near the end of his 2012 campaign as a last gasp to try to get back into the race, but this time he’s running as a jobs-creating executive who’s done his homework on national policy and is ready to lead.”

Author Ben Domenech wrote at The Federalist all the candidates who have been asked are missing “an obvious opportunity for turning the question back on the actual policy battle at issue…The whole point is that it’s your decision whether to attend or not.” (Emphasis in original.)

“Conservatives and (most) libertarians believe people ought to be able to decide whether to freely associate with others themselves, not be dragooned by the force of government into mandatory associations as the secular left maintains,” he said. “The entire point of religious freedom laws in Indiana and elsewhere is that we want to give people who say 'I cannot in good conscience participate in this ceremony' the right to defend themselves in court based on their deeply held beliefs.”